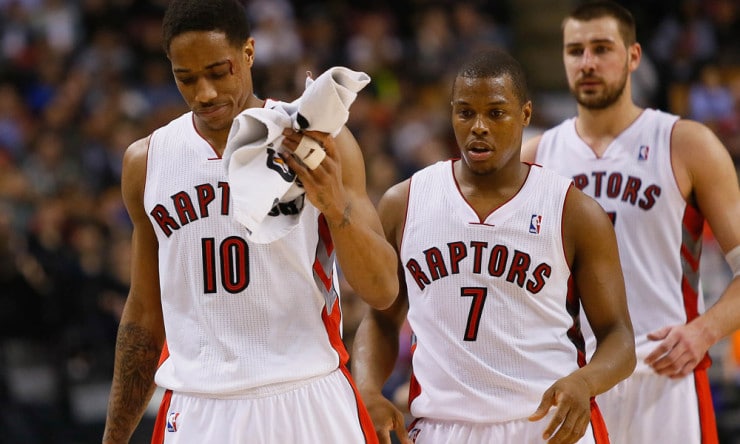 The Toronto Raptors will enter the 2015 NBA Playoffs having turned in the most successful regular season in franchise history. Their 49-33 record is one game better than last season’s 48-34 mark, but the Raptors will collectively hope for a different fate than the one that they met last season. It took the Brooklyn Nets all of seven games to do so, but they managed to eliminate the Raptors last spring. This year, with that experience under their belts, DeMar DeRozan and Kyle Lowry now hope to lead the team to the second round of the playoffs for just the second time in franchise history and the first time since 2001.

The biggest question mark heading into the postseason for the Raptors will be the health of Lowry. Fresh off of his first All-Star appearance, Lowry captured the eyes and imaginations of the NBA viewing public with a stellar regular season but missed nine of the team’s final 14 games due to a sore back. Since returning to the lineup, he has appeared somewhat rusty, but showed signs of coming out of his slump in the team’s final regular season game against the Charlotte Hornets.

Since missing extended time earlier this season, DeRozan has seemed to have returned to form, averaging 25.5 points per game during the month of April.

Along with Lou Williams, the talented trio of Toronto will need to keep up with the scoring prowess of the Wizards if they are to advance into the second round this year—something certainly within the realm of possibility.

Like the Raptors, the Wizards improved on the 44 wins that they turned in last season and ended the 2014-15 regular season with a 46-36 record. Some expected the Wizards to turn a corner this season and find themselves in the top four in the Eastern Conference, but obviously, that wasn’t meant to be.

The addition of Paul Pierce has certainly added a much-needed veteran presence in and around the still developing combination of John Wall and Bradley Beal. What is most disconcerting about the Wizards, though, has been their potential to go through extended periods during their season where they seemed disinterested and devoid of any intensity. After going 31-15 over the course of the first 46 games of this season, playing without an injured Beal for an extended stretch, the Wizards finished the season just 15-21. In a season where many expected them to take an appreciable step forward, they appeared to have improved just marginally and enter the playoffs on a low note, having lost three of their four final regular season games.

Marcin Gortat still strikes us as one of the more underrated centers in the league, and Otto Porter has filled in capably for the regressing Pierce. Although the acquisition of Ramon Sessions has yet to pay major dividends, his ability to play at a faster pace is something that, in theory, should mesh well with the Wizards and allow them to speed the game up against the Raptors.

This series will likely be won by the team that controls the pace and the glass. It is also worth mentioning that the Raptors swept the season series, 3-0.

During the regular season, the Wizards were 17-24 on the road. The Raptors, on the other hand, are a fairly good home team (27-14). With both teams trying to right their ships and battling their own issues, the expectation here is that the Raptors will prevail in Game 1.