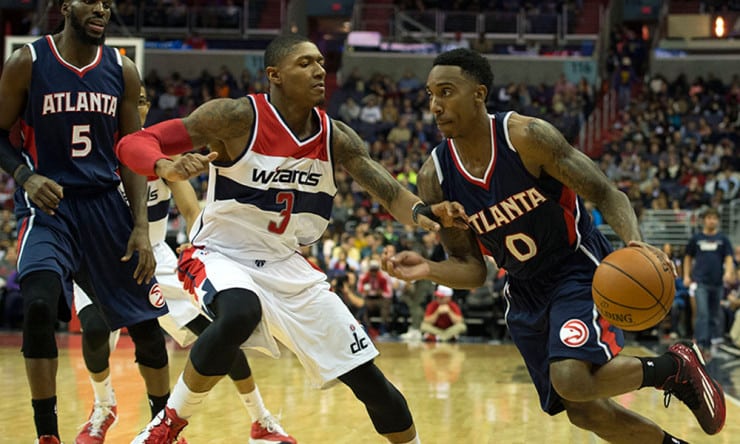 The NBA playoffs are about pulling out victories by any means necessary. Style points, at the end of the day, mean very little. For Atlanta, although it wasn’t always pretty and the team had to stave off a last minute comeback from the Washington Wizards, the Hawks got the crucial road win in Game 4 to even the series 2-2 headed back home.

The difference in the Hawks’ play in Monday’s Game Four victory compared to their Game 3 loss on Saturday was on full display.

For starters, the Hawks’ usual starting lineup combined for only 58 points in Game 3 but scored 74 points in the next game. Atlanta’s turnaround was primarily driven by an assertive effort from All-Star guard Jeff Teague, who scored 26 points and tied for a game-high eight assists. After an extremely slow start to the series, Teague is averaging 22 points and 7.5 assists over the last two contests and is finally dominating the point guard matchup against a John Wall-less Wizards team.

The Hawks’ adjustment of playing two point guards in the lineup gave the Wizards fits and allowed Atlanta to control the pace and tempo of the contest. Second-year guard Dennis Schroder provided 14 points and eight assists off the bench in 29 minutes.

The Hawks looked every bit of a No. 1 seed in Game 4, which could spell trouble for the injury depleted Wizards from here on out.

Game 4 clearly demonstrated how much the Wizards are missing their floor general, All-Star guard John Wall, who continues to roam the sidelines with fractures in his wrist. The Wizards turned the ball over 16 times, while dishing out only 21 assists in the loss.

However, the Wizards can take a positive out of the defeat.

Despite Atlanta’s improved play on both sides of the ball, Washington still had an opportunity to tie the contest in the waning moments, but veteran forward Paul Pierce’s jumper bounced off the rim.

Shooting guard Bradley Beal erupted for 34 points in Game 4, and is averaging 23.7 points in the series’ last three games without Wall in the lineup. The aging Pierce is also showing zero signs of slowing down, as the forward is averaging 16.6 points per game in the series.

If the Wizards are to pull off the upset over Atlanta, it will have to be an all-hands-on-deck effort, which is the reason why guys like Otto Porter Jr. and Marcin Gortat need to rebound immediately before Game 5.

Porter recorded four points on 25 percent shooting in Game 4 while Gortat hit just 1-of-7 shots from the floor and was held to only three points.

The Wizards have refused to fold up like a tent without Wall in the lineup, but it’s going to be an uphill battle to win the next two out of three in order to secure a spot in the Eastern Conference Finals.

Who will win game five?

The Atlanta Hawks head back to Philips Arena with the series tied 2-2. While the Hawks have been inconsistent to start the playoffs, they’ve managed to pull out victories in must-win situations.

Atlanta has the momentum heading into Game 5 and the Wizards, while fighting hard without Wall, are outmatched in almost every aspect of the game.

Look for Atlanta to continue to assert their aggressiveness in attacking the basket for a Game 5 victory.