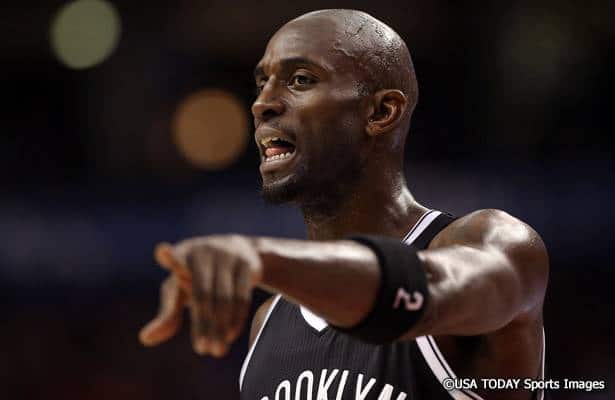 Aside from the Miami HEAT and Indiana Pacers, no Eastern Conference teams have seen this season unfold according to plan.  As a result, those two teams are head and shoulders above the rest of the pack, while the third best team in the East is currently a mere two games over .500.   Which of these teams will emerge as the third seed in the conference, and can any Eastern team even remotely challenge the HEAT or Pacers in the conference semifinals?  Basketball Insiders’ Tommy Beer and Nate Duncan debate.

Duncan: Shockingly for an Eastern Conference in which the Bulls, Nets and Knicks were deemed heavyweights before the season, the favorite for the third seed now appears to be the Toronto Raptors. The Raptors currently hold the third seed with a 22-20 record, but record-wise they are in a morass of teams including the Bulls, Atlanta Hawks, Brooklyn Nets and Washington Wizards. However, the Raptors are playing much better ball than anyone else competing for the third seed. DeMar DeRozan, Kyle Lowry and Amir Johnson are all having career years for the Raptors. Since the Raptors traded away Rudy Gay on December 8, they are 16-9. Their underlying statistics back up that outstanding record as well; Toronto is outscoring opponents by 6.7 points per 100 possessions since the trade. In fact, that mark ranks fifth in the entire league over that time frame, shocking for a team that was deemed tankworthy earlier in the season. By contrast, the Nets and Hawks rank ninth and 14th since December 8, while the Bulls are 17th.  Although I hesitate to put all my eggs in the statistical basket, from that standpoint the Raptors look like the clear favorites.

Beer: Coming into the 2013-14 season, the expectations for the Brooklyn Nets were sky high. Brooklyn enjoyed arguably the most active and successful offseason of any team in the league – mortgaging their future to add Hall-of-Famers in Kevin Garnett and Paul Pierce, while also fortifying the bench with top-tier role players such as Andrei Kirilenko, Alan Anderson and Jason Terry. The total cost to owner Mikhail Prokhorov was astronomical. The Nets’ luxury tax bill alone is higher than the GDP of many industrialized nations. And the man tasked with coaching this juggernaut was the recently retired Jason Kidd.

In the build up to the regular season, the Nets were viewed by many as legit contenders for the Miami HEAT’s crown. However, the Nets looked like anything but championship contenders over the season’s first two months. On New Year’s Eve, the Nets were demolished by the Spurs in San Antonio (their sixth loss in seven games), dropping Brooklyn’s record to putrid 10-21, an embarrassing 11 games under .500. Kidd had already (unceremoniously) fired his lead assistant in Lawrence Frank, and the team’s best big man, center Brook Lopez, had his season end prematurely due to a broken foot. It appeared there would be no way to avoid a nightmare season.

Yet, somehow, the Nets seemed to flip the switch in the New Year. Brooklyn reeled off five straight wins to start 2014, and is now 8-1 in the New Year. Brooklyn has received improved play across the board. Joe Johnson is averaging 19 points per game in January. Deron Williams has returned from a debilitating ankle injury, but told Coach Kidd he’d prefer to come off the bench to not disrupt the chemistry of a successful starting lineup featuring Johnson, Pierce, Garnett, Anderson and Shaun Livingston.

Reserves Andray Blatche and Kirilenko have provided a major spark off the bench as well. In fact, the Nets are now 9-1 in the 10 games Kirilenko has played at least 13 minutes this season. Brooklyn is 9-21 in the games he’s missed or played fewer than 14 minutes.

After a nightmarish start to the season, things have been downright dreamy in Brooklyn since the calendar flipped to 2014.

Duncan: Tommy, you seem to know a lot about the Nets.  Did you somehow gain access to Lawrence Frank’s daily reports?  I agree with you that the Nets have looked great since the new year.  In that time frame, they are scoring 108 points/100 and allowing only 101.5/100.  In addition to better health, the key has been the return to form of Kevin Garnett.  He was supposed to be a panacea for their defense, but Nets were oddly terrible defensively with him on the floor early in the year.  He also was one of the worst offensive players in the game early on.  Since then, he has really come on, and since January 1 the Nets allow only 88.7 points/100 when Garnett is in the game.

Deron Williams recently made his latest return from his myriad ankle injuries as well.  If he can recapture the form he flashed at the end of last season and Garnett can keep it up (neither of which is guaranteed), the Nets could very easily play better than the Raptors the rest of the way.  And the Nets have more players with an established track record than the Raptors, so one could argue that the Nets are more likely to sustain their excellent recent play.

On the other hand, you could argue that the Nets have many older players with worse injury histories than the Raptors’ much younger starting five. The Raptors have also been an outstanding third in defense since the Gay trade, and I think we can expect a little regression to the mean because Toronto does not have any players with outstanding defensive track records on their roster.

That said, the Raptors’ point differential on the season is 5.5 points/100 better than the Nets.  All of those desultory blowouts early on really hurt the Nets in that metric.  But even if you want to make the (reasonable) argument that the Nets aren’t that team anymore, the Raptors are still 2.5 points/100 better than the Nets even since the Gay trade.  They have even been a point better since the Nets’ “switch-flipping” on January 1. Combine that with Toronto’s 2.5 game lead in the standings, and I think they are the clear favorites even if you buy that the Nets may perform a little better over the rest of the year.

Beer: The Nets had plenty of talent on their roster last season, and were able to win 49 games and capture the fourth seed in the East. However, they were knocked out of the playoffs by an under-manned Bulls team missing many of their top players. In that bitterly disappointing first-round defeat, an issue that had been a major problem for Brooklyn all season reared its head in a major way – lack of leadership, aggressiveness and intensity. The hope was that the the blockbuster trade that resulted in Brooklyn obtaining Garnett, Pierce and Terry would be truly transformational. As much as future Hall-of-Famers KG and Pierce would help the Nets on the floor, their biggest and most important impact was supposed to come in the locker room. There are very few individuals who can nearly single-handedly change the culture of a franchise immediately upon his arrival. It just so happens that KG is one of those players.

However, early on in the year, KG was not only terrible defensively early on (as you noted above), he was also remarkably inefficient and ineffective on the offensive end as well. But the Nets seemed to have flipped the switch since the start of the New Year. In addition, it seems that Coach Kidd has finally found his bearings and is comfortably settling into his new position.

So are we in agreement that these are the only two real possibilities for the three seed (barring massive injuries, of course) or is there anyone else you feel could be a legitimate contender for that spot?

Duncan: It sure doesn’t look like anyone else could contend.  The Raptors and Nets are really the only Eastern teams playing above .500 quality ball at this point.  The Hawks and Bulls have almost even point differentials on the year, but both of them are likely to play worse over the course of the year considering the Al Horford injury and the Luol Deng trade.  Moreover, those two teams have had two of the easiest schedules in the league and those toughen to about league-average over the rest of the year.  Meanwhile, the Raptors and Nets have had two of the harder schedules in the league, and they have the two easiest schedules the rest of the way.

So, it looks like the seedings would favor that it will be Pacers and HEAT versus Nets and Raptors in the second round in some permutation.  Do you see any way that the Nets and Raptors will actually challenge those two teams or could even win the series?

Beer: Honestly, I don’t see any way either the Raps or Nets put up much of a fight against the HEAT or Pacers. Miami and Indiana have been so clearly head-and-shoulders above the rest of the conference this year, I’d be shocked if either team was even take to a Game 6 before their seemingly inevitable showdown in the Eastern Conference Finals.

Duncan: I could see either of these teams taking the Pacers to six games, if only because the Pacers’ offense could go cold and lead to a very low-scoring series.  But ultimately I don’t see the Pacers losing to either squad.

Although it’s unlikely, I do think it’s possible that either the Nets or Raptors could give the HEAT a series and maybe even win, if only because there is a chance that Miami may not be the team we remember from the last two postseasons by the time these playoffs roll around.  Zach Lowe did a great job detailing why he thinks Miami may be in a bit more trouble defensively this year than past editions.  To that, I would add that LeBron James does not quite look like the all-encompassing force of nature he has been in past years on defense.  Whether that is him starting to slow down a little bit at age 29 (players usually peak from a pure athleticism standpoint at 23-25) or simply taking it easier in the regular season remains to be seen.

Meanwhile, Dwyane Wade has now missed the last four games while defensive stalwarts Chris Bosh and Udonis Haslem are also getting up there in age.  If Wade is not himself again in the playoffs, and the rest of the roster suffers incremental decline from being a year older, they could be vulnerable.

As I mentioned, Toronto has been much better than Miami statistically since the Gay trade. And Brooklyn matches up very well with the HEAT with their new smaller lineup and great size on the wings.  While it is still very difficult to see either team really challenging the HEAT, there are enough statistical indicators there that an upset would not be completely out of left field.