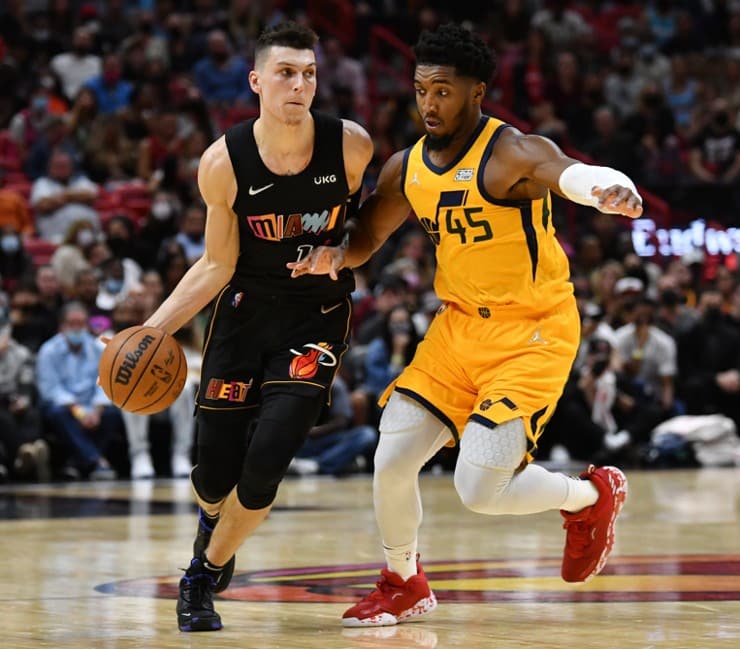 Donovan Mitchell said he would not demand a trade from the Jazz, but nothing is stopping team president Danny Ainge from moving the three-time All-Star. On the first day of free agency, the team traded Royce O’Neale to the Nets for a 2023 first-round draft pick. And the front office didn’t extend a qualifying offer to Eric Paschall.

Then, at the beginning of the month, the Jazz traded Rudy Gobert to the Timberwolves for Malik Beasley, Patrick Beverley, Leandro Bolmaro, Walker Kessler and Jarred Vanderbilt.

Jazz G.M. Justin Zanik could still trade the guard this offseason. If the price is right, the fifth-year player will be gone. On Nov. 23, 2020, Mitchell signed a multi-year contract extension with Utah worth $163 million.

With the Jazz now seemingly listening to offers for Mitchell, we’ll break down three suitable trade partners for the Jazz guard.

Mitchell has expressed interest in playing for the Heat. According to multiple sources, the Heat would have to trade Tyler Herro and Duncan Robinson in order to acquire Mitchell. At most, G.M. Andy Elisburg could offer two first-round draft picks and three pick swaps. But Miami losing Herro would be huge.

Furthermore, Ainge would love to have him. Now, how much does Ainge and Zanik value Herro? That’s the ultimate question. The Jazz have not made it beyond the second round of the playoffs since 2007.

Herro won NBA Sixth Man of the Year this past season. He averaged 20.7 points, 5 rebounds, 4 assists per game in the 2021-22 season. Robinson also ranked seventh in made 3-pointers last season (232).

Based on the risk-reward ratio, trading away Herro and Robinson for Mitchell would not improve the Heat’s roster. Unless Ainge throws in notable bench players, such a trade would benefit the Jazz more in the long run.

Next, the Knicks could pursue Donovan Mitchell in the coming days. Knicks president Leon Rose is the guard’s former agent, and he was spotted at the American Airlines Center during the Jazz-Mavericks first-round playoff series. More importantly, the team has all the right pieces to interest Ainge in a potential Mitchell trade. The Knicks can offer the Jazz the following players: RJ Barrett, Immanuel Quickley, Quentin Grimes and Obi Toppin.

While the Knicks might not become an immediate playoff contender with Jalen Brunson and Donovan Mitchell, they’ll be in a good spot with Julius Randle, Mitchell Robinson and Evan Fournier.

Lastly, Mitchell is less likely to end up on the Raptors. However, the guard would benefit Toronto’s backcourt alongside Fred VanVleet and Gary Trent Jr. Per multiple sources, Ainge would not only want Khem Birch, OG Anunoby and Thaddeus Young, but he’s also demanding Scottie Barnes. This has “highway robbery” written all over it. Mitchell is one of the top guards in the NBA, but Barnes just won Rookie of the Year.

In the 2021-22 season, he averaged 15.3 points, 7.5 rebounds, 3.5 assists and 1.1 steals per game. All things considered, Masi Ujiri would be taking a big gamble in such a risky trade. Mitchell turns 26 in September. Although the guard is still young, giving up Anunoby, Barnes and Trent Jr. to acquire him is a bit much. What if he sustains a season-ending injury next season?

During the 2022 NBA Playoffs, Mitchell averaged 25.5 points, 4.3 rebounds and 5.7 assists per game in the Jazz’s first-round series against the Mavericks. In Game 1, the guard ended his outing with 32 points, 6 rebounds and 6 assists in his team’s 99-93 win. Other articles related to Donovan Mitchell are on the main page.