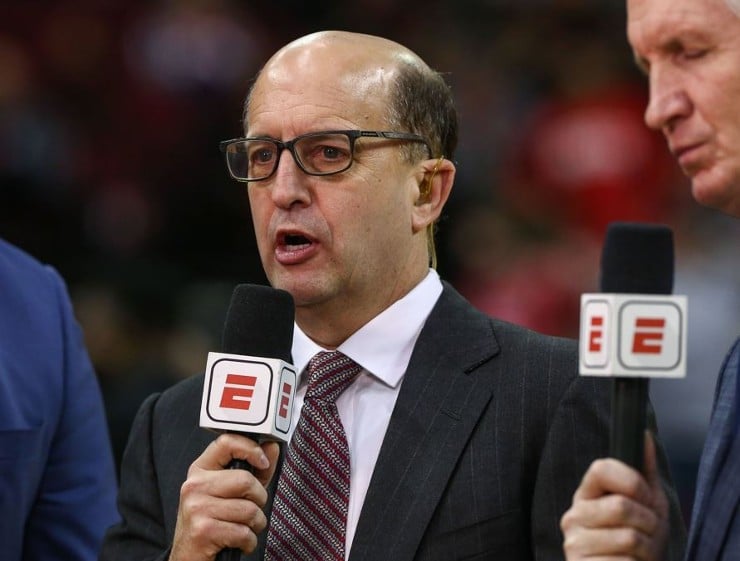 Jeff Van Gundy once coached the New York Knicks and Houston Rockets, and now the ESPN commentator is calling out the flaws of the Knicks’ roster.

In a phone interview with the New York Post outside his home, he told the media outlet, “The Knicks have good players, but you line it up against the competition in the East, and this roster is not on the same level.”

“They could shock the world and be a playoff team, but I look at the East and I’d have to say eight to 13 is where they should be predicted. They’re not even close to a lock for the play-in. A lot has to go right.”

His assessment is correct. The Boston Celtics and Philadelphia 76ers are loaded. Not to mention, the Brooklyn Nets still have Kyrie Irving and Kevin Durant.

While talking about Julius Randle, RJ Barrett, and Jalen Brunson, Van Gundy also mentioned, “I’m not being negative about those guys.”

“Randle made an All-Star team, Barrett they hope continues to become a more efficient player. Jalen is in that category of fringe All-Star.”

“That being said, if you’re going to make a significant jump in the Eastern Conference — when you have [Boston’s Jayson] Tatum, [Jaylen] Brown, [Brooklyn’s Kevin] Durant, [Milwaukee’s Giannis] Antetokounmpo, [Miami’s Jimmy] Butler, and [James] Harden and [Joel] Embiid in Philly, you need a top-20 player in the league. That’s what you build around. They’re still searching for that.”

It will be interesting to see Brunson play without Luka Doncic by his side. Barrett and Randle are still good players, but the former Mavericks guard could struggle without the Slovenian All-Star.

During the offseason, the Knicks also signed center Isaiah Hartenstein. And the team re-signed center Mitchell Robinson to a four-year deal worth nearly $60 million.

Of course, Kemba Walker, Alec Burks, and Nerlens Noel were traded to the Detroit Pistons. Knicks G.M. Scott Perry had to unload players in order to clear up cap space to sign Brunson.

Van Gundy later said, “The one thing everyone can agree on, if the Knicks are to make a jump in the standings, they have to have a guy — or two guys — to build around. They still don’t have that building block, from a star player’s standpoint.”

The Knicks will have to prove doubters wrong in the 2022-23 season. They attempted a trade for then Utah Jazz guard Donovan Mitchell, but team executive Danny Ainge was asking for a better package.

Then, the Cleveland Cavaliers pulled the rug out from under them. They traded Lauri Markkanen, Collin Sexton, Ochai Agbaji, three unprotected first-round draft picks (2025, 2027, and 2029), and two pick swaps (2026 and 2028) for Mitchell.

Last season, the Knicks finished 37-45 (.451) and 11th overall in the Eastern Conference. However, the team definitely has the talent to at least qualify for a play-in spot next season. Only time will tell whether or not Jeff Van Gundy is correct.