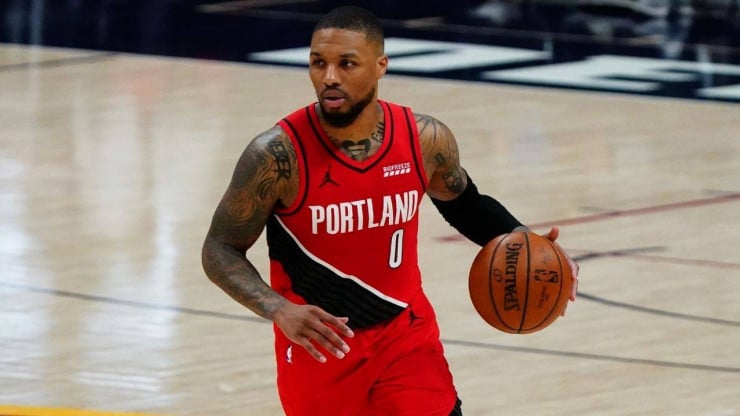 After Russell Westbrook was traded to the Los Angeles Lakers, Portland Trail Blazers fans began speculating that Damian Lillard would not be playing with LeBron James and Anthony Davis anytime soon. The salary cap complicates a scenario like this. Los Angeles also signed Carmelo Anthony and are frontrunners to sign Rajon Rondo. However, there was a time when Lillard did want to play on the Lakers.

On June 14, 2017, the six-time All-Star tweeted: “If blazers said they didn’t want me… Utah Jazz or Lakers.” This tweet was four years ago, but the fans never forget about these posts on the Internet. If he is not traded in the offseason, could Trail Blazers general manager Neil Olshey pursue an in-season trade during the 2021-22 regular season?

If blazers said they didn't want me… Utah Jazz or Lakers https://t.co/jep3V9qRsS

During a recent one-on-one interview with Complex News’ Pierce Simpson, the point guard was asked an important question, regarding an August 12, 2021 tweet he sent to one of his fans. The 31-year-old was asked, “How much y’all wanna bet that before the NBA season starts the Lakers will still get Damian Lillard?”

On Twitter, Lillard responded with “Bet a Million.” When asked about his response to his fan from Simpson, the guard replied, “He said, ‘I would bet anybody that when the season starts, Dame’s going to be playing for the Lakers.’ And the Lakers just traded for Russell Westbrook, so I’m not going to play for the Lakers. We play the same position, so [I was] like bet a million.”

Could the Lakers trade Westbrook?

This can be interpreted many different ways. It could mean he will play the entirety of the 2021-22 season with the Trail Blazers, or the guard could request a trade during mid-season. Based on his 2017 tweet, there is a possibility that he could get traded to the Jazz. For something else to consider, what if the Westbrook experiment fails? Would the Lakers trade Westbrook for Lillard? There is a slim chance of that happening. In the words of Lloyd Christmas, “So you’re telling me there’s a chance?”

In all seriousness, although the point guard is the king of triple-doubles, he has yet to win a championship on a top contender. Whether this is a team chemistry or play-style issue, one thing is for sure: LeBron is in a win-now mode; he is not getting any younger. If LeBron cannot get the ball rolling with Westbrook, he will turn to another superstar who can help him win his fifth ring.

Last season, the guard averaged 28.8 points, 4.2 rebounds and 7.5 assists in 67 games played. For field goal shooting, he had a field goal percentage of 45.1 percent. Not to mention, he shot 39 percent from three-point range. Lillard was selected All-NBA Second Team and won 2020-21 Teammate of the Year.

Moreover, the ninth-year veteran has a player efficiency rating of 25.6, ranking eighth overall in the league. With 275 three-pointers made last season, the guard ranked third in the NBA as well. According to Basketball-Reference, Lillard has a Hall of Fame probability of 90.6 percent.