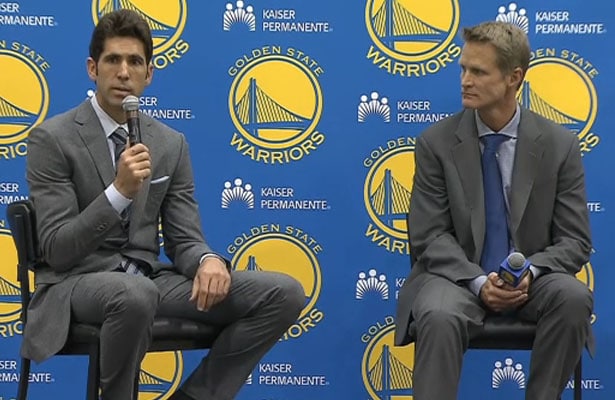 Last season the Golden State Warriors won 51 contests. It marked the first time in 20 years, dating back to the 1993-94 campaign, the franchise reached those heights. However the club was unceremoniously bounced in the first round of the Western Conference playoffs leaving a taste of disappointment lingering in the air.

Driven by the desire to etch their name among the league’s elite, the Warriors opted to replace head coach Mark Jackson and hire former general manager and player Steve Kerr. Golden State believes from a philosophical standpoint that Kerr is the better fit to call the shots from the sidelines – despite the lack of coaching experience.  The Warriors also refused to part ways with emerging shooting guard Klay Thompson during talks to acquire All-Star forward Kevin Love earlier this summer. Love is now in Cleveland, who were more than willing to pay the asking price.

At the helm of both of these pivotal offseason decisions was general manager Bob Myers who has served in the role since April 2012. The club has compiled a 98-66 (.597) record with Myers making the front office decisions, but his future evaluations will undoubtedly be tied to the summer of 2014 and his decisions to remove Jackson and refusal to make a stronger effort for the talented Love.

But Myers will get all of the time he needs to watch his vision for the franchise take shape because according to Tim Kawakami of the San Jose Mercury News, the Warriors have locked up the executive through the 2017-18 campaign on a new deal.

Let’s take a look at some of Myers’ biggest moves since taking the helm in Golden State:

Myers’ moves have been mostly solid. But the decisions made this past summer will likely be a strong deciding factor on his legacy as general manager in Golden State.

The New York Knicks re-signed forward Carmelo Anthony to a five-year near maximum level contract back in July, but with a new television deal looming many have pondered why Anthony didn’t structure his new pact in a way to earn even more money down the line.

At the end of the day, Anthony says he didn’t want to go through the free agency frenzy again and plans on ultimately retiring in New York.

“I plan on ending my career here,” Anthony told Fred Kerber of the New York Post. “So it wasn’t for me to go out there and try to strike a two-year deal and then have to go through this situation in two years. I’m not doing that ever again. I would never do that again. I would advise no one to ever do that,” Anthony said. “I experienced it and it’s behind me.”

Anthony also admitted that a potential free agency change would have also meant starting over from scratch from a public image standpoint.

After reaching the playoffs the past three seasons with Anthony in the fold, the Knicks crashed back to earth in 2014 winning just 37 games and watching the festivities from their respective couches.

The offseason has been a busy one for newly crowned president of basketball operations Phil Jackson as he looks to retool the team’s roster which had grown stagnant.  Jackson hired the freshly retired Derek Fisher to serve as head coach, re-signed Anthony to a long term deal and also made roster moves via the trade market.

The Knicks aren’t likely to enter the 2014-15 campaign as title contenders, but with Anthony and Jackson onboard for the long haul the franchise’s trajectory is seemingly headed in the right direction.