Home » news » Nba Am Deadline Has Buzz But Lacking Deals 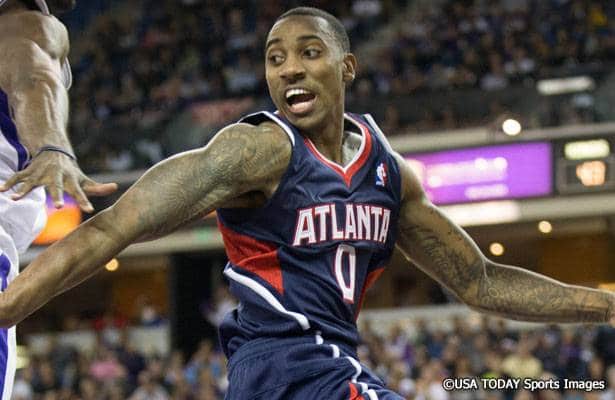 We’re  just two days away from the NBA’s trade deadline.  Up until this point the hoopla surrounding potential deals have generated more buzz than any actual moves. But with All-Star Weekend in the rearview mirror a fresh round of trade chatter has emerged throughout the association. Here’s a look at the latest scuttlebutt:

Jeff Teague and the Atlanta Hawks

Hawks starting point guard Jeff Teague’s name recently emerged in a trade rumor involving the New York Knicks, but considering the Knicks’ trio of guards include Raymond Felton, Pablo Prigioni and Beno Udrih this comes as no surprise. The Knicks are desperate for an upgrade in their backcourt and are dead set on acquiring a dependable floor general.

There are some rumblings around the league that Hawks president of basketball operations and general manager Danny Ferry isn’t exactly in love with the four-year, $32 million deal Teague inked last summer. The fact Teague has struggled mightily with his shot under first year head coach Mike Budenholzer plays into this rumored storyline. However, up until this point, rookie guard Dennis Schröder hasn’t nearly demonstrated the skills required for a franchise to entrust the keys to their offense to him – just yet.

Couple of other things to note. Since Teague signed an offer sheet with the Milwaukee Bucks last summer, the guard has an implicit no-trade clause through mid-July of this year. The guard also has a 10 percent trade bonus if dealt.

The Pelicans have been looking to strengthen their frontcourt and may be ready to make a deal at the trade deadline. According to Marc Spears of Yahoo! Sports, New Orleans is prepared to make second year guard Austin Rivers and the rights to NBDL sensation Pierre Jackson available for the right return of assets.

Rivers has made improvements this season compared to his disastrous rookie campaign, but doesn’t appear able to live up to his lofty draft status (No. 10 overall in 2012). Jackson was drafted by the Philadelphia 76ers in last year’s draft and quickly shipped to New Orleans. Jackson is the D-League’s second leading scorer, pumping in 29.1 points per game in 31 contests for the Idaho Stampede. Despite the Pelicans battling injuries in the backcourt, Jackson has been unable to get a call-up to the Pelicans all season.

Sacramento Kings Are Buyers, Rumored To Be Pursuing Rajon Rondo

Now, the Kings are reportedly setting their sights higher and looking to secure an All-Star caliber player.

Celtics guard Rajon Rondo is reportedly on Sacramento’s radar and according to Spears’ report, the Kings discussed a deal involving Isaiah Thomas, rookie Ben McLemore and a draft pick. However, Rondo didn’t express an interest in re-signing with the Kings long term and Sacramento was somewhat hesitant to move the talented McLemore.

But this shows, with two days until the deadline, that the Kings are buyers looking to improve and be aggressive in the trade market.

Veteran guard Andre Miller hasn’t played in a game for the Denver Nuggets since December 30 and it appears a reconciliation with the franchise is off the table. But, a positive point for both parties is that Miller still has value around the league and his list of potential suitors continues to grow as we approach the trade deadline.

According to Marc Stein of ESPN, the Minnesota Timberwolves would be interested in trading for Miller at the deadline if the team can find a taker for guard J.J. Barea.

The Timberwolves are shopping Barea, who has one year remaining on his deal worth $4.5 million, in an effort to shave salary. Miller is on the books for $5 million this season and is owed $4.6 million next season but only $2 million of that amount is fully guaranteed.

Adrian Wojnarowski of Yahoo! Sports is reporting the Memphis Grizzlies are discussing a deal  which would send veteran forward Tayshaun Prince to the Minnesota Timberwolves in exchange for forward Chase Budinger and guard J.J. Barea.

The Grizzlies rank dead last in the league in three-point field goals per game and are 26th overall in three-point percentage. Budinger is career 36 percent shooter from deep and would figure to provide some immediate perimeter help.

According to the report, the Grizzlies are looking to shed the remaining years on Prince’s deal which calls for him to make $7.2 million this season and $7.7 million in 2015 and veteran guard Tony Allen could be included.

The last time Miami HEAT forward LeBron James hit free agency, a national circus ensued. James is in a similar position heading into the summer as he can elect to exercise an early termination option in order to hit free agency.

James’ tenure in Miami has been a successful one. The All-Star forward has led the team to three straight trips to the NBA Finals and have captured the last two titles in the process. But when the topic of free agency arises, most can envision the thought of James leaving Miami to pursue another challenge given with how he left Cleveland in 2010.

To James’ credit he recently tried to put the brakes on the talks surrounding his impending future and his desire to remain in Miami – long term.

“At this point, I can’t,” James told Steve Smith during a NBA TV interview. “At this point, I can’t. We don’t know what can happen from now to July, so what I’ve been able to do this whole season to this point is just worry about what’s at hand and that’s winning another championship. And hopefully at the end of this year I can put myself in a position where I can hold that Larry O’Brien Trophy up once again and then I will assess what I have to do with my future after that.”

The HEAT (37-14) are currently second in the Eastern Conference, sitting 2.5 games behind the Indiana Pacers.

Basketball Insiders launched our first digital magazine last week, an in-depth 2014 NBA Trade Deadline Guide. The issue can be purchased on Turn-Page, which allows you to view the magazine on your desktop, tablet and smart phone. It can also be purchased through the app store for Apple devices and Android devices. Here are some excerpts from the magazine’s features.