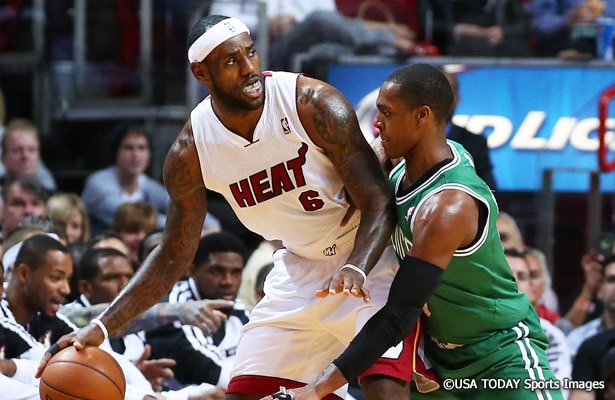 Are the Miami HEAT Suffering From A Championship Hangover?

The two-time defending champion Miami HEAT (30-12) own the fifth best record in the league and currently sit second in the Eastern Conference standings. For any other franchise in the league these type of results would be applauded. However, through the first half of the season the defending champions have hardly resembled a dominant team set on hoisting their third consecutive Larry O’Brien trophy.

This isn’t to say the HEAT haven’t been capable of turning on the juice at varying points during the season at hand. Miami holds a 12-4 mark versus teams with a .500 or greater record which includes victories over Indiana, Los Angeles (Clippers) and Portland.

But the HEAT have struggled mightily putting away inferior teams on a consistent basis, posting an 18-8 (.692) record versus teams below .500 which includes losses to Brooklyn (2), Chicago, Detroit New York, Philadelphia and Sacramento.

On the surface Miami is winning close to 70 percent of their contests versus substandard competition, but a quick stroll among the league’s top teams clearly illustrates Miami’s struggles in this area.

Obviously, the nightly uncertainty of whether All-Star guard Dwyane Wade’s troublesome knee is able to go is a primary driver in the team’s up and down play this season. However, there have been numerous examples pointing to the team’s inability to start fast against inferior opponents, instead relying on late game heroics.

Reigning league MVP LeBron James recently admitted to the media that the club’s core group may be fatigued from all of wear and tear accumulated from playoffs runs over the last three seasons (three straight trips to the Finals).

However, looking a bit deeper, Miami may not be struggling as much as being portrayed. In 2013, the HEAT won 66 contests and through 41 games this season the current iteration is actually winning at a similar level:

Similar starts, but last year’s unit finished the season in an extremely dominant fashion winning 38 of their final 41 contests. But one of the main differences is the fact Wade missed just 13 games last season. To date, Wade has missed 12 games in the current campaign and will likely miss plenty more before the season concludes as the team looks to preserve his health for playoff time.

“It’s tough,” [LeBron] James told Barry Jackson of the Miami Herald. “Guys think it’s easy, but it’s tough. We have a team built on chemistry, built on rhythm. With so many of the guys being in and out, and the concern with D-Wade, it’s been tough on all of us. We’ve got to go in with the mindset sometimes that he’s not playing, as opposed to: Is he playing?

“We’ve had a little more guys out than just Dwyane this year. From a rhythm standpoint, it’s kind of hurt us. We’re a team that is built on rhythm and chemistry, and we’ve had so many guys out with injuries that it’s kind of hurt our performance.”

The toughest thing in sports to do, after winning a title, is pulling off a repeat. Miami is attempting to pull off the ever rare three-peat and between the physical fatigue, injuries and possibly a championship hangover of sorts the team has struggled to remain consistent. But when the smoke clears, assuming a healthy Wade is in the rotation, Miami figures to be in the thick of things in late May.

The Indiana Pacers have the best record in the NBA this season. The team features a legitimate MVP candidate in Paul George and a solid contender for Defensive Player of the Year honors in Roy Hibbert. Former All-Stars Danny Granger and David West provide veteran leadership, while forward Lance Stephenson is an emerging force having a breakout campaign.

While those guys consistently get the mainstream headlines, the Pacers’ offseason acquisition of forward Luis Scola from Phoenix has undoubtedly played a significant role in Indiana’s evolution.

Scola, 33, is averaging 8.3 points and 5.2 rebounds on 50 percent shooting from the floor this season providing the Pacers with the frontcourt bench presence the team has lacked in recent years.

Hibbert has been impressed with his new teammate and believes the veteran forward could take on an even larger role if given the opportunity.

“He has been playing really well, solid,” Hibbert told Candace Buckner of the Indianapolis Star. “(Scola) knows how to pass, rebound, he’s been working on his athleticism too. Before, in training camp, we had a dunking drill and he airballed a dunk. Now, he’s like two-handed slamming it, one-hand slamming it. He’s a hard worker and I’m happy.

“Seriously, I feel like he can do a lot more for us but you know, he gives into the system of playing with four bigs and he’s very efficient in the time he’s on the court.”

Hibbert also added how he tries to Scola more involved on a nightly basis.

“I always try to find him in the post because I know he can do a lot more than what he’s doing because of the minutes he’s playing,” Hibbert said. “So whenever I’m out there, I always tell him I’m going to look for him. I try to hook him up with some passes for him to dunk it and (get) one or two more shots than he usually gets.”

Despite his teammates confidence, Scola is content in his current role as his career starts to wind down.

“I’m getting closer to the end of my career, so the most important thing for me is winning and this is a great chance for me to achieve that,” Scola said. “It’s a great place to work and as a matter of fact, we’re winning a lot of games.”

Pacers president of basketball operations Larry Bird has consistently stated acquiring Scola was priority number one last summer and to this point the move has paid immediate dividends.

The Pacers are 33-7 and currently own the best record in the NBA.