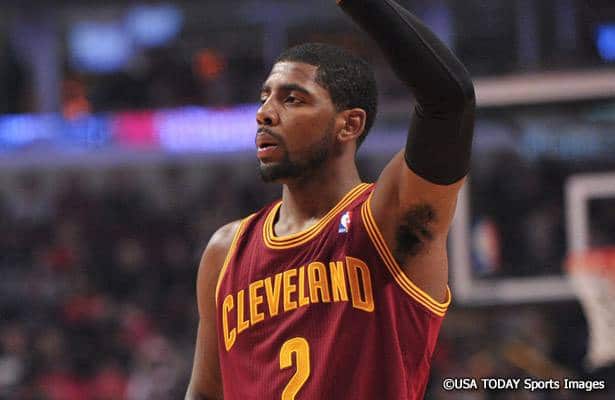 NBA Circles were abuzz on Thursday when ESPN’s Chad Ford stated in his weekly hoops chat that Cleveland Cavaliers All-Star guard Kyrie Irving has been privately telling folks he wants out of the franchise. Of course about as soon as the rumor started spreading, Irving was able to establish a bit of damage control in the situation.

“There’s been so much so-called reports coming out that I don’t want to be here,” Irving told Jason Lloyd of the Akron Beacon Journal. “That’s what you guys get paid to do, but that’s just so much negative attention. I know we’re struggling, but it’s not about me. It’s about our team. It’s about us fighting every day for each other and me fighting for my teammates.

“Yes, I’m in Cleveland. I enjoy myself. I enjoy going out and competing at the highest level for the Cleveland Cavaliers. That’s what it’s about. It’s not about me and it’s not about this controversy, ‘Do I privately want out when my contract is up?’ I’m still in my rookie contract and I’m happy to be here. And I’m pretty sure I’m going to be here for a long time. I’m not saying anything to tell the future, but I’m pretty sure the relationship I have with Dan Gilbert and management extends off the court. I enjoy being here.”

The truth in this situation is probably somewhere in the middle.

Subtract out the multi-million dollar contracts and what you will find is that NBA players view their employment to their respective organization much like everyone else in society. A corporate accountant may become frustrated with their direct manager, a few employees in another department and having to take on a role that they feel doesn’t maximize their talents. Naturally, this worker will tell people close to them about those frustrations. But this doesn’t mean the accountant wants to work for another firm.

Depending on the day of the week you catch a NBA player you will notice some of those same frustrations playing out in their profession. Instead of the frustration with coworkers the accountant faced, the player is upset with a few of his teammates.  The accountant has an issue with their direct boss, while the NBA player may have a blow up with his coaching staff. The accountant is asked to handle a project they feel is inferior to their skills, while a NBA player may scoff at being relegated to a sixth man role or less minutes in the rotation.

The mere process of voicing frustration with an ongoing situation does not mean you want out of it. It means it is an area which needs to be tightened. Much like the rest of society, all players in the league  will be able to name a few frustrating aspects of their job. This is life. Irving being in a losing environment, at the moment, will cause frustration. This is natural and doesn’t mean an exodus awaits.

But until Irving inks a long term deal in Cleveland these types of situations will continue to be placed under the magnifying glass, especially in the aftermath of LeBron James’ free agency departure from the team to join Miami in 2010.

Irving is set to hit free agency after the 2016 campaign, but could sign a lucrative long term deal with the Cavaliers this summer, an option the guard is fully aware of but not committed to disclosing his thoughts.

“It’s still too early to say,” Irving said of the extension talk. “I’m still trying to get through this season. Everybody is trying to antagonize this team and put it on me. I’m here for my teammates, I’m here for Coach Brown and the coaching staff and I’m going to play my heart out every single night for the Cleveland Cavaliers.”

The Indiana Pacers (35-10) have raced out to a strong start and have been fixtures among the league’s top three teams in regards to overall win percentage. While the star players, in this case forward Paul George, get most of the mainstream headlines a team having this amount of success typically has multiple guys playing at an extremely high level.

The Pacers are no different. Behind George in the rotation, Roy Hibbert and Lance Stephenson have all served as catalysts for the team this season. But when All-Star reserves were announced on Thursday, Stephenson’s name was absent much to the dismay of his supportive teammates.

“I just think it’s unfortunate that Lance didn’t make it,” Forward David West said according to Mark Montieth of NBA.com. “It’s a slap in the face. He has to use it as motivation.”The fact that he’s beat (the other coaches’ teams) and he’s had great games against the majority of the coaches … he’s a major reason we’ve been able to get (35) wins.

“For me it’s not a big deal. But for a guy like Lance, who’s carried us at times with his energy … he’s won games for us single-handedly this year. It’s unfortunate he didn’t make it. He can go out and prove these guys wrong. For some of the guys who made it, this will be the highlight of their year. The highlight of our year will be after April. I just hope Lance uses that to fuel him down the stretch this year.”

Stephenson, who leads the league in triple-doubles this season with four, is averaging 14.2 points, 7.3 rebounds and 5.4 assists per game.

Stephen Curry (Golden State Warriors), Kobe Bryant (Los Angeles Lakers), Kevin Durant (Oklahoma City Thunder), Blake Griffin (Los Angeles Clippers and Kevin Love (Minnesota Timberwolves) will be the starters for the Western Conference. Bryant will miss the game due to injury, so the NBA will choose a replacement player to take his spot.