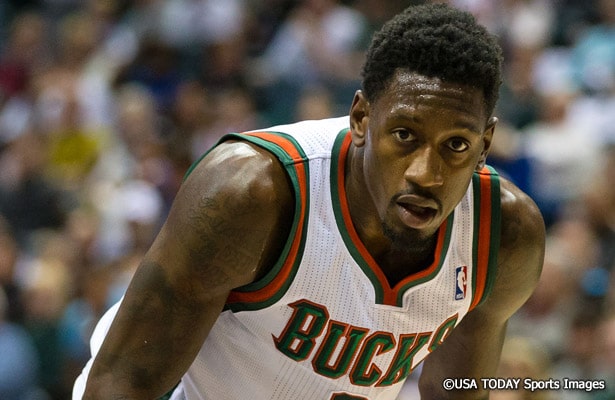 Could Bucks center Larry Sanders be on the move?

Entering the season, no one exactly had the Milwaukee Bucks battling for the Larry O’Brien trophy come June, but the club’s league worst 9-40 start is a shock on the other side of the spectrum.  Milwaukee is currently on pace to win just 15 games this season and is seemingly at the beginning stages of a lengthy rebuilding process.

One of the biggest issues plaguing the Bucks has been the team’s inability to stay healthy with just four players logging action in at least 40 contests.

Sanders is at the center of the missed time.

The fourth-year pro has appeared in just 22 contests and is averaging eight points, 7.3 rebounds and 1.8 blocks per outing. Those numbers aren’t horrible, but considering the Bucks signed Sanders to a four-year, $44 million contract extension last summer, expectations were that the young center would continue making strides over the 2013 campaign.

To date, Sanders’ production across the board has fallen off a cliff.

Sanders missed much of the early portion of the season because of a thumb injury reportedly suffered in a nightclub incident and has struggled to find the rhythm. To be fair, Sanders has shown signs of life in February averaging 14.3 points and 11.3 rebounds in three contests.

However with the February 20 trade deadline under two weeks away and the Bucks eyeing the draft lottery, speculation has naturally turned to the long-term future of Sanders with the franchise.

According to Marc Stein of ESPN, sources maintain the Bucks have remained consistent in their messaging about Sanders not being on the trading block even though the club is actively looking for assets in the market.

Yet the Bucks appear intent on resisting, at least in the short term, though we stress the word appear and have to throw in the caveat — as we did on Stein Line Live with Detroit’s Greg Monroe last week — that there’s still time for teams to change their trade stances.

The trade deadline is 13 days away. And nothing stops teams from listening even when they’re telling suitors on the other line that so-and-so is completely off the table. The Bucks, furthermore, are widely described by rival teams as a club busily exploring all possible options in advance of deadline after assembling a team they thought could compete for a playoff spot before promptly falling to the bottom of an unsightly Eastern Conference.

The Bucks currently have $56.8 million in guaranteed salaries on the books this season giving them $1.9 million in available cap room. Sanders is on the payroll for just $3 million this season before his extension kicks in at the start of the 2015 campaign at an average of $11 million per year.

The 2014 NBA draft class is expected to be one of the most talented and deepest crops of talent in years. Naturally, fans of struggling franchises are salivating at the prospect of netting a future All-Star caliber player.

This is where the notion of tanking comes into focus. Tanking is the belief a franchise has effectively given up on the current campaign in order to strengthen their chances at netting a higher pick in the draft lottery.

The Charlotte Bobcats have been fixtures in the draft lottery the past three years, winning just 66 games from 2011-13. However, if the playoffs started today the Bobcats would be the eighth seed in the Eastern Conference. But with the Bobcats potentially having three first round picks in such a talent rich draft, fan conversation around the team has started to shift toward focusing more on acquiring another young asset in the lottery.

Bobcats guard Kemba Walker is having trouble accepting this line of thinking, believing the franchise has the talent already in the fold to compete at a high level.

“That’s ridiculous, as far as us tanking and getting a high draft pick,” Walker told Rick Bonnell of the Charlotte Observer. “I don’t think we need any more (high) draft picks at this point.

The Bobcats have already recorded 22 victories this season. Last season, the club won just 21 contests total. The arrival of head coach Steve Clifford, free agent signee Al Jefferson and the continued emergence of Walker have been driving factors in the team’s year over year improvement.

Knicks’ Woodson frustrated by his own performance

The New York Knicks (19-30) won 54 games last season and reached the Eastern Conference Semifinals for the first time since the 2000 campaign. However, as we approach the All-Star break, the team is playing sub .500 ball and only on pace to register 32 wins.

With any amount of struggle, discussions have shifted toward finding the scapegoats for the team’s woeful start to the season. Head coach Mike Woodson has emerged as a candidate to receive some of the blame and as a result his job security has routinely been rumored to be on the hot seat.

Woodson understands why his name is being linked in termination rumors and admits this season has been frustrating for him personally as well.

“This year has been, for me, it’s been kind of a disaster from a coaching standpoint in trying to get players to compete and play at a high level,” Woodson said in an interview on ESPN New York 98.7 FM’s The Stephen A. Smith and Ryan Ruocco Show. “That’s the frustrating part about it, because I know we’re better than what we’ve shown and we’ve still got a chance.”

According to reports, Knicks players are tired of Woodson’s pointed criticism following losses.

Woodson says he won’t deeply engage in rumors on his job security, but vows to work hard in an attempt to right the ship in the second half of the season.

“I can’t concern myself with that. I really can’t,” Woodson said. “It’s been out there, it’s buzzing. The media, they write it.

“That’s not my concern. My concern is coming to work every day with my head held high, trying to figure out how I can get us out of this hole. It’s not worrying about if I’m going to have a job tomorrow. I don’t live my everyday life thinking about that. My job is thinking about X’s and O’s and trying to get guys to play at a high level and win games.”

The Knicks remain just 2.5 games behind Charlotte for the last Eastern Conference playoff spot with plenty of time to salvage the season.

Later this week, Basketball Insiders’ first Digital Magazine issue will drop, featuring the most comprehensive look at the NBA Trade Deadline you will find anywhere.

If you do not want to download the app, we will have a web-based solution for you that works great on the same devices. The links for that will drop when the issue is available.

Get ready for 110 pages of trade deadline knowledge, exclusively from Basketball Insiders.