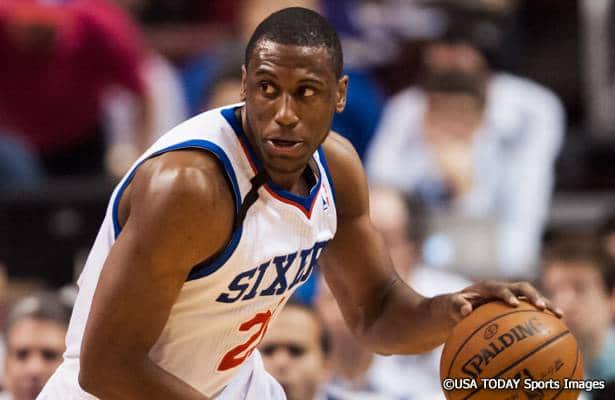 Sixers’ Thaddeus Young’s  Future Still Up In The Air

The Philadelphia 76ers are in the beginning stages of a projected long term rebuilding project. While the club has secured a solid building block in rookie guard Michael Carter-Williams, the team’s front office still has lots of work to do this offseason.

One of the Sixers’ most attractive assets around the league is forward Thaddeus Young. The seventh year wing is averaging a career-high in points (17.5) and steals (2.2) this season. Approaching the trade deadline last month, Young’s name was prominent in the rumors along with Evan Turner and Spender Hawes.

Hawes and Turner were shipped to Cleveland and Indiana, respectively, at the deadline leaving Young as the as the last man standing from the team’s once promising past.

Young is on the books for $8.8 million this season and an additional $9.4 million in 2015. The veteran also owns a player option worth $9.9 million for the 2016 campaign. Although there was interest around the league, the future money owed was likely  one of the biggest reasons Young wasn’t moved back in February .

Young expects the trade rumors to pick up once again this summer and into next season as Philadelphia continues its rebuild, but doesn’t believe he’s auditioning for his next employer.

“Guys always talk and they always say [that at] any given time and given moment, you are auditioning for 29 other teams,” Young told Keith Pompey of the Philadelphia Inquirer. “So me personally, I’m just taking it as going out there and growing as a player and growing as a leader and taking steps towards more success in my career.

“I just took it as going out there and playing and focusing in and me doing the job and the task at hand. I didn’t look at it as I was auditioning or anything like that. It crosses your mind. But at the end of the day, you have to just play basketball and things will work out.”

The Sixers started the season 3-0, but have compiled a 12-46 record since leaving them just two games ahead of the Milwaukee Bucks who currently own the NBA’s worth record.

Former All-Star center Jermaine O’Neal, drafted out of high school in 1996, career is undoubtedly winding down. When veteran reach this phase in their  respective professional journey’s  they often take the time to savor those last fleeting moments of participating on the big stage.

O’Neal is no different. The veteran big man took a bit of time to reminisce on Tuesday as his Golden State Warriors squad traveled to Indiana to face the emerging Pacers. Back in the early to mid 2000s, O’Neal was a pivotal part of the Pacers’ franchise, leading the team to an Eastern Conference Finals appearance in 2004.

Now, O’Neal serves as a reserve in Golden State as the finish line looms near. However, going back to Indiana brought up a plethora of old memories from yesteryear for O’Neal to reflect upon.

“I’m going to be honest, I was just kind of sitting and enjoying the atmosphere,” O’Neal told Rusty Simmons of the San Francisco Chronicle. “It brought back so many memories to see this arena packed and the crowd going crazy. It literally brought tears to me.

The  Pacers (46-14) have the best record in the NBA this season and are legitimate title contenders, while the Warriors (37-24) are flirting with a 50 win campaign in their own right. In a dream scenario, O’Neal says it would be a storybook ending for the Pacers and Warriors to meet up in the NBA Finals this season.

“I am extremely happy for this city,” O’Neal said of Indiana, proud of their success. “I’m always going to be a part of this city. I’m always going to be considered a Pacer in my blood, whether people want it or not. That’s just how I feel. It was just fantastic to be back here. In my dream scenario, the Golden State Warriors would be playing against the Indiana Pacers in the NBA Finals.”

Quick Finance Note: According to Forbes, Brooklyn Nets owner Mikhail Prokhorov’s is worth an estimated 10.9 billion per their recently updated billionaires list. According to the report, this makes the 48 year old Prokhorov tied for the 109th richest person on the planet.

The Nets have the highest payroll in the league coming in at $102.5 million for the 2013-14 campaign. The franchise is set to pay roughly 80 million in luxury tax penalties at season’s end. The Nets (29-29) are currently in sixth place in the Eastern Conference standings.

J.J. Redick Still On Shelf, No Timetable Set For Return

The Los Angeles Clippers are one of the few teams in the league believed to have a legitimate chance at hoisting the Larry O’Brien trophy at season’s end. To strengthen their chances , the team recently signed forwards Danny Grangers and Glen Davis who were recently recipients of buyouts from their respective teams.

The moves give the Clippers added frontcourt depth but there is still a glaring absence in their guard rotation.

Sharpshooting guard J.J. Redick was acquired last summer in a three-team trade and promptly signed to a four-year $27 million deal. However, Redick has appeared in just 30 games this season with Los Angeles due to injury.

According to Clippers head coach Doc Rivers, there is still no definitive timetable for Redick’s return to the rotation as the guard continues to struggle with a bulging disk in his lower back.

“I don’t know,” Rivers told Broderick Turner of the Los Angeles Times about the prospect of losing Redick for the rest of the season. “I haven’t had that fear yet. I don’t want that fear, maybe would be a better way of putting it. But I don’t know. I just keep getting updates. I’m sure there is some thought of that. He’s been out for so long. But we’re just hoping for the best.

“He’s doing a lot better. He’s shooting a little bit. I don’t know what that means, but at least he’s moving around shooting. But there’s been no update. I don’t think he’s improved to the point we thought he would, so far. We had anticipated him being back almost [by now].”

Redick is averaging a career-high 15.7 points per game and shooting 40 percent from three-point range. The Clippers are also missing former Sixth Man of the Year Jamal Crawford who is battling a strained left calf.