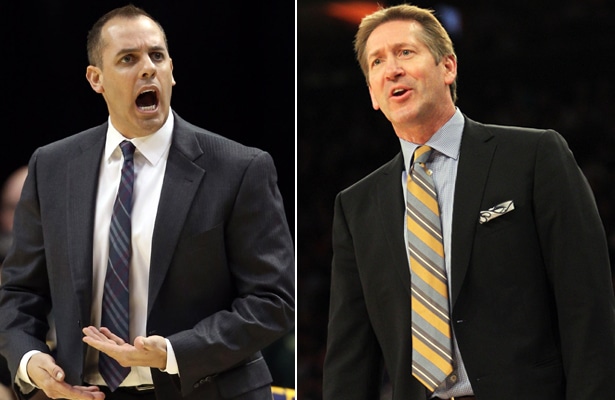 Much like MVP rankings and other end-of-year awards, the Coach of the Year discussion probably makes the most sense to start having right around the All-Star break, as teams have generally settled into the types of squads they are destined to be at this time. Of course, like other awards, no matter whom you discuss, there are almost certain to be those fans out there that will question and advocate for their coach of choice. To be honest, the debates that can arise from such discussions are exactly why we love sports, and the NBA in particular, in the first place.

While San Antonio’s Gregg Popovich and even Miami’s Erik Spoelstra probably each deserve more credit than they are often given, fans and analysts alike tend to somehow (almost) intrinsically discredit those able to maintain a steady level of success. Even though Spoelstra’s lack of a COY makes a bit more sense given the relatively short period he’s been Miami’s head coach, the fact that Popovich only recently (2011-12) won his second COY honor despite having boasting a .681 career winning percentage over a 17-year tenure at the helm in San Antonio is ludicrous.

Without further ado, here are our top candidates for the 2013-14 NBA COY, to date:

Frank Vogel, Indiana Pacers – At 37-10, and currently leading the Eastern Conference, Vogel’s Pacers appear to be the strongest threat to dethrone the two-time defending champion Miami HEAT. While Vogel enjoys one of the league’s most complete and talented rosters, credit is still absolutely due as his system not only encourages and rewards team play, but it also reinforces the organizational strength and chemistry that has led to the Pacers’ recent revival.

Jeff Hornacek, Phoenix Suns- Having already won four more games (29) than last year’s total 25-57 finish, and a considerable amount more than many of us anticipated, Hornacek’s Suns have already transitioned from being considered a nice early-season story to a team reportedly looking to add additional firepower for an expected playoff push. It’s tough to argue against this rookie head coach, and what his young team has been able to accomplish thus far.

Scott Brooks, Oklahoma City Thunder – Prior to this season, there had still been a fair amount of skepticism regarding just how much of an impact Brooks made as a coach, given all of the talent he’s been dealt throughout his OKC career. Even though the roster is still loaded with productive players, this season has more than proven the effectiveness of his basketball philosophy and approach. Of course, it doesn’t hurt to have the leading MVP candidate in Kevin Durant on your side, but Brooks has also found a way to seamlessly deal with the absence of Russell Westbrook in just about half of their games due to knee procedures.

Gregg Popovich, San Antonio Spurs – Popovich has been an absolute genius at both pacing his team throughout the rigors of an 82-game regular season and finding a way to make steady improvements along the way. Even in the face of injuries to key players, as San Antonio has endured this year (Tony Parker, Kawhi Leonard, Manu Ginobili), the Spurs always seem to remain in the mix with the league’s best records. Far from a random occurrence, as Popovich’s imprint has never been more clear.

Terry Stotts, Portland Trail Blazers – To say no one saw this type of start from the Blazers coming would be an understatement. Don’t get us wrong, there were those that predicted Portland could be a “surprise” or potential “fringe” playoff team, but there were very few that anticipated them still being within range of the top seed in a tough Western Conference at this point in the season. While Damian Lillard has continued his natural progression, Stotts’ system has been instrumental in featuring LaMarcus Aldridge and promoting positive play out of guys like Wesley Matthews and Nicolas Batum as well.

Erik Spoelstra, Miami HEAT – For everyone that wants to limit praise to the job Spoelstra has done simply due to having LeBron James, Dwyane Wade and Chris Bosh on his roster, we remind you that most of the coaches considered to be all-time greats (Phil Jackson, Red Auerbach and even the NCAA’s John Wooden) also had plenty of Hall of Fame players at their disposals as well. Put simply, merely having great talent does not permit a coach to just roll the ball out and let them have at it. Just ask the coaches that preceded and followed each of the legendary coaches named earlier. While Spoelstra certainly isn’t in that discussion at this point, we offer those comparisons as a gentle reminder of what drives the public’s perception of what a “great coach” looks like.

»In Related: 5 Things You Didn’t Know About Kevin Durant

Additional coaches that deserve recognition and could very well be a part of this discussion in the coming months would include: Doc Rivers (Clippers), Tom Thibodeau (Bulls), and perhaps even David Joerger (Grizzlies) or Mike Budenholzer (Hawks) if their respective teams make strong enough second-half pushes.