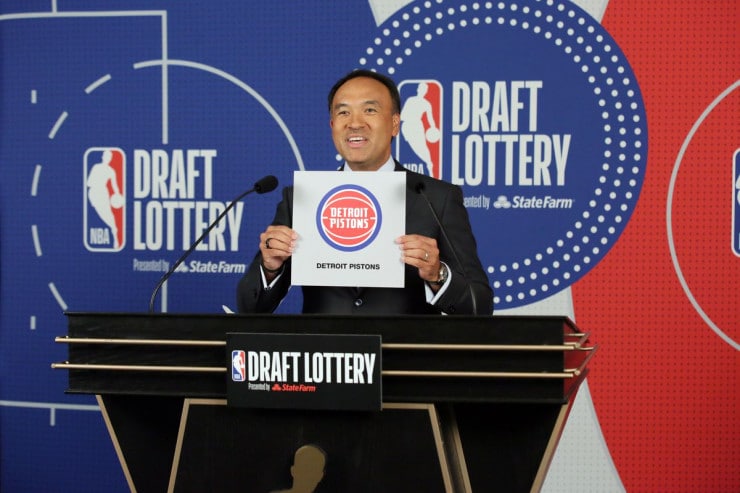 The Milwaukee Bucks are NBA Champions once again. Fifty years after winning their first title, the Bucks defeated the Phoenix Suns in six games behind a sensational performance from their superstar Giannis Antetokounmpo. Milwaukee drafted the two-time regular season MVP and now Finals MVP back in 2013 with the 15th overall pick. Every year the biggest opportunity for teams to shape their future comes in the draft, and this year is no exception.

The 2021 NBA Draft is right around the corner but teams have had about a month to hone in on the players that may be available to them. The Draft Lottery set the order for the top 14 picks in the draft with the Detroit Pistons claiming the top overall selection. The last time the Pistons had the first overall pick they selected Hall of Fame center Bob Lanier out of St. Bonaventure in the 1970 draft.

Just as there is pressure in the postseason on championship contenders, there is pressure on these organizations to “get it right” on draft night. The future of these franchises largely depends upon making the right moves. There is more to it than just making a pick. There will be plenty of potential last-minute deals on the table for the front office. Quick decisions must be made with the future of the organization flapping in the breeze. It is not for the faint of heart.

Looking at the teams in this year’s lottery, four teams stand out among the rest as ones that absolutely have to make the right decisions on Thursday. Two teams (the Golden State Warriors and Orlando Magic) have two selections each in the lottery. The Warriors are ready to return as title contenders and the Magic are in a full-on rebuild.

Another team in the middle of a rebuild is the Oklahoma City Thunder, who have three picks in the first 18 selections. They can also afford to take a gamble that might not end up paying off, though they do have a strong history of making good picks. The Houston Rockets also have three first-round picks, including the second overall. There is no wrong choice here, no matter which direction they go.

These four teams will face pressure, scrutiny and judgment in the coming days, weeks, months, and years. No one is ever sure how these prospects will pan out but a lot of that is determined by player development and the stability of the organization. The bright lights have moved from the players in the Finals to the front office executives.

Detroit will be making their first top-five selection since 2003 when they took Darko Milicic second overall. While the Pistons missed on the likes of Carmelo Anthony, Chris Bosh and Dwyane Wade, they appear to have done exceptionally well last year when they took Killian Hayes, Isaiah Stewart and Saddiq Bey in the first round.

Now they have a chance to build upon that young core with a generational talent. How they go about doing that is an interesting storyline as well. The Pistons could simply take the consensus choice in Cade Cunningham, and make the pieces fit around him. The other option would be to trade the pick for a star player and/or multiple draft picks.

Pistons general manager Troy Weaver has plenty of options to consider. “We’ll look at everything,” Weaver said when asked how many options Detroit will look at for the top pick. “We’ll uncover every stone and exhaust it and put ourselves in the best position to make the right choice for the Pistons.”

Although they finished last in the Eastern Conference this past season, the Pistons are by no means a dormant team. The roster is loaded with potential, led by Jerami Grant. Most of their core is already under contract for next season and will be earning less than $6 million. This is a situation that many executives would love to be in, but it is the top overall pick. The franchise cannot afford to mess it up.

Another Central Division team makes an appearance on this list but the situation is different in Cleveland. With Cunningham off the board by the time the Cavs make the third selection, they will have their choice of who is still available among Evan Mobley, Jalen Suggs and Jalen Green. The concern is not about which player they should take, but at what position they will be addressing.

Should the Rockets pass on Mobley, he would be an enticing selection to go along with Collin Sexton, Darius Garland and Isaac Okoro. That may mean that a decision looms with Jarrett Allen playing at the center position. Cleveland acquired him as part of the blockbuster James Harden trade, but his fit alongside Mobley may not be ideal. While he is just 23 years old, Allen will be a free agent after next season and could be in line for a big payday.

The more realistic doomsday scenario for Cleveland is having to make the choice between Suggs or Green, with their backcourt already established with Sexton and Garland. This pick could be on the move but Cleveland would have to get a dynamite package in return to convince them to pass on one of these premier talents. The organization seems to be more willing to trade Sexton than offer him a big contract.

"I thought the Cavs were going to write the check to pay Sexton a max contract this summer, but based on what I’ve been told the last few months from sources around the league, I no longer believe that’s true." pic.twitter.com/a637mcehQB

Cavs general manager Koby Altman believes that this draft has more quality at the top than in previous years, saying, “Even beyond the top five, there could be potential All-Stars.” Reports have circulated that Sexton could be the one moving on as teams have already begun inquiring about the electric young point guard. He will be entering the final year of his rookie deal next season. Whatever Cleveland opts to do, there will be a microscope on their decision for many years to come.

Perhaps no team had a worse 2020-21 season than the Raptors. Due to the ongoing COVID-19 pandemic, the team was forced to call Tampa Bay “home” as they spent the season in the Sunshine State. After a disastrous start, the Raptors were finally able to battle their way back to a .500 record only to see the ship sink as players and coaches were out with COVID cases. After seven straight playoff appearances that include their 2019 championship, Toronto missed the postseason.

The big question for Toronto is the fate of longtime point guard Kyle Lowry. The 35-year old will be one of the most sought-after free agents this summer, with several championship contenders interested in adding the veteran. Should Lowry not return, Toronto will have a major decision on its hands. While they could potentially add Suggs or Green alongside Fred VanVleet, they could throw the first curveball of the night.

Passing on one of the top four players on the consensus draft board is risky, but one that could pay huge dividends for this team. Scottie Barnes is a player that fits the Toronto mold to perfection. The talented forward from Florida State is a point guard stuck in a power forward’s body. His vision and ability to find open shooters make him an elite prospect. He also is a menace on defense, able to guard four positions on the floor with his nearly 7-foot 3-inch wingspan.

Scottie Barnes strength is his versatility defensively. Very few people can legit guard 1-5, and he's one of them. He's an *elite* team defender, and he *always* plays hard. Always.

That said, I have some concerns on that end.

Despite their struggles this past season, the Raptors are still in a “win now” mode. Surrounding VanVleet with lengthy defenders like Pascal Siakam and OG Anunoby is something that Nick Nurse likes to do. Adding Barnes to that mix will only elevate the potential for this team, but it comes at the risk of leaving top-level talent on the board for someone else. Between Lowry and the fourth pick, the Raptors will have some serious decisions to make in the coming days.

The Pelicans narrowly missed out on the postseason this year but hope to change that next season. Change is the operative word, as there will be plenty of it down in New Orleans before the start of the 2021-22 campaign. The organization just hired Willie Green as their new head coach, which will be the third one in three years for Zion Williamson. The young phenom has been the face of the franchise since he arrived in New Orleans, and it is critical that they find the right person for the job.

Beyond that, the Pelicans will have the 10th pick in the draft as they look to add more talent to the roster. There is uncertainty about free-agent point guard Lonzo Ball but all indications are that they will not match any significant offer he receives from another team. In addition to the status of Ball, New Orleans will have to address several needs this summer. The forward spots are solidified with Williamson and Brandon Ingram but that is where it ends.

Draft night isn't just about the No. 10 pick for #Pelicans, who'll also enter July 29 with four second-round selections. In #NBA mock drafts from various websites, Texas center Jericho Sims is among the names popping up at NOLA's slots in Round 2: https://t.co/Jn09YTRIGa pic.twitter.com/ibTSliD6fT

New Orleans will likely have several great options to choose from at this spot. Should they look at versatile defenders, they could have their pick between guys like Moses Moody and Keon Johnson. A better win-now option might be someone like Davion Mitchell if he is still available. Mitchell is nearly two years older than Williamson, so maturity should not be an issue. He is also a proven winner and plays both ends of the floor.

One intriguing name to monitor is James Bouknight. The former UConn guard is an elite offensive weapon that can score from anywhere on the floor. His athleticism and ability to cut off the ball make him an interesting prospect for this Pelicans team. The homerun pick is likely not going to be there for them but filling one of the holes on this roster will go a long way in their return to postseason play, and keeping their young superstar happy.