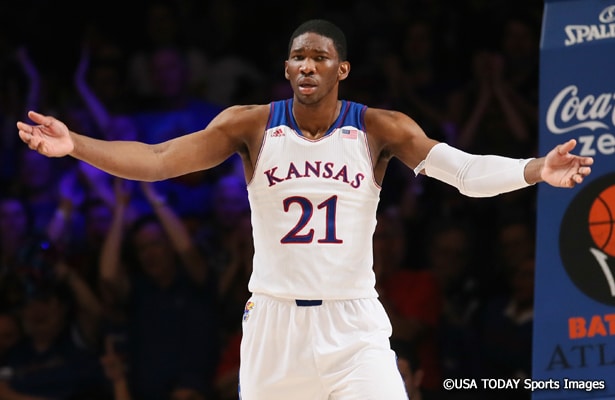 Several months ago, nobody thought that Joel Embiid would be the No. 1 overall pick in the 2014 NBA Draft. He wasn’t even expected to be the No. 1 prospect on Kansas’ campus.

In a loaded draft class that’s expected to include potential stars Andrew Wiggins, Jabari Parker, Julius Randle, Marcus Smart and Dante Exum among others, Embiid was an afterthought prior to the start of the season. After all, the Cameroonian seven-footer just started playing organized basketball in late 2011. Whenever Embiid’s name did come up, the word “raw” was sure to follow.

However, 20 games later, Embiid has been a monster. He has developed much quicker than expected, showing significant progress from game to game. He’s averaging 11.2 points, 7.4 rebounds and 2.8 blocks in 22.5 minutes while shooting 66.7 percent from the field.

Embiid has shown glimpses of brilliance throughout the season. Two weeks ago, he had 16 points, nine rebounds, five blocks and two steals in a win over No. 8 Iowa State. The very next game, Embiid nearly recorded a triple-double in a win over No. 9 Oklahoma State, finishing with 13 points, 11 rebounds and eight blocks. It’s remarkable how far he has come as a player in such a short amount of time.

NBA scouts and executives are blown away by the center’s development. Many teams now view Embiid as the best prospect in the 2014 NBA Draft. Some are so high on the center that they say the gap between Embiid and the rest of the pack – Wiggins, Parker, Randle, Smart, Exum, etc. – is significant. That’s why Embiid has climbed to No. 1 in most mock drafts in recent weeks. More and more teams are moving the big man up their draft board, and believe he has the highest ceiling of all the 2014 prospects.

This would’ve sounded crazy until very recently, but NBA decision-makers have fallen in love with Embiid. When an executive starts talking about things they like about Embiid, they can go on forever. They drool over his graceful movements, soft touch, exceptional footwork, incredible instincts, high basketball IQ, 7’5 wingspan, extraordinary athleticism and, of course, limitless potential. He’s drawn comparisons to Hall of Fame center Hakeem Olajuwon, which may seem crazy, but you can’t help but notice a lot of The Dream’s traits in Embiid when watching him play.

In 2011, Embiid played organized basketball for the first time when Luc Richard Mbah a Moute traveled to his native Cameroon to hold a basketball camp. Embiid hadn’t even watched much basketball at that point, but he was able to pick up on the game quickly.

According to Jason King of Bleacher Report, Embiid was able to translate skills he learned from other sports over to basketball. His footwork was honed on the soccer field, while his aggression and blocking ability originated on the volleyball court. Embiid’s father, Thomas, actually wanted his son to pursue a professional volleyball career in Europe, and had to be persuaded to let his son attend Mbah a Moute’s alma mater, Montverde Academy, to pursue his professional basketball dreams.

At this point, it’s looking like Mr. Embiid made the right decision. If his son is the top pick in this year’s draft, Embiid would make $4,592,200 in his first year and potentially more than $20 million on his first contract. Embiid is a strong candidate for the No. 1 pick in the 2014 NBA Draft and he won’t slip much further if another prospect ends up going first overall.

Not bad for a kid who just recently started taking basketball seriously.

Tonight on ESPN, LeBron James’ Miami HEAT and Kevin Durant’s Oklahoma City Thunder will go head-to-head, putting arguably the two best basketball players on the planet against one another. Both players are looking forward to the match-up.

“Oh yeah, it’s a challenge,” James said of covering Durant, according to Fox Sports. “It’s not secondary it’s first-dary. He’s one of the toughest coverages. It’s between him and (Carmelo Anthony) for me individually. It’s a game within a game. You want to win, but you also want to try to do your part in who you’re going against. I like going against the best and K.D.’s definitely up there.”

“I’m looking forward to just going up against him,” Durant said James, according to NewsOK.com. “Everybody wants to see the one-on-one matchup. I know that’s the big thing. But we’re going to matchup together, so I’m sure you guys are going to get what you want. But at the end of the day, it’s all about the Thunder versus the HEAT, and it’s going to be fun playing against them.”

James said that it’s impossible to guard Durant one-on-one, which Durant said was “flattering.” Durant returned the compliment, saying that James is one of the most difficult players to cover in the league.

Right now, Durant and James are locked in a race for this season’s Most Valuable Player award. James has taken home the trophy in four of the past five season, with Durant finishing second three times. Both players downplayed the importance of winning MVP.

“It doesn’t rank too much,” James said. “It’s a great accomplishment and I thank my teammates every time I get a chance to be part of that. But like I said, I love being the MVP of our team. If it results in me being MVP of the league from among your peers, it’s a great achievement.”

“You guys pump that up,” Durant said of the media hyping up the MVP race. “Fans pump that up more than the players, I think. Every day is a process for me. I’m just trying to work every single day to get better. And at the end of the year, I guess, we’ll see where we’re at. But every single day, I just try not to look past it and just keep working and see where we are. I try not to worry about that because I can’t control none of that. All I can control is how I play, how I approach the game and how I prepare and the rest will take care of itself.”