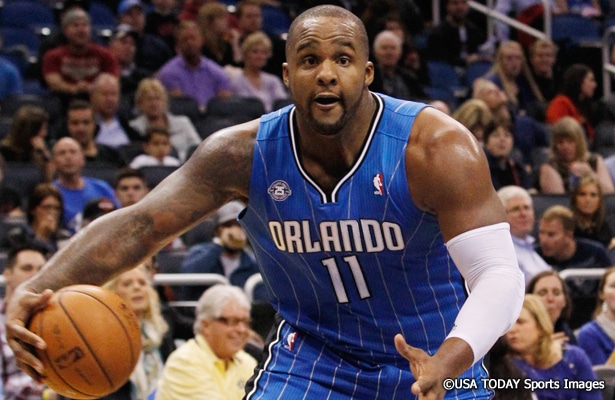 The Magic tried hard to move Davis before Thursday’s trade deadline but were unable to find a deal to unload him. The Los Angeles Clippers are the frontrunners to sign Davis, league sources said. Clippers GM and coach Doc Rivers coached Davis with the Boston Celtics and had discussions with Orlando in recent days about acquiring him. The Brooklyn Nets, who like the Clippers are searching for a backup big man, have signifcant interest in Davis too, league sources said. Also interested, according to one of the sources, are the Miami HEAT, San Antonio Spurs and Golden State Warriors.

Davis is still capable of producing as a high level, as he showed on several occasions while in Orlando. Davis, who is just 28 years old, is 12.1 points and 6.3 rebounds this season with the Magic. He had a number of big games this season, including a 33-point game in early December and three 20-point games.

The Magic decided to waive Davis because they wanted to play some of their younger big men, specifically Andrew Nicholson and Kyle O’Quinn. As Wojnarowski noted in his article, Orlando’s front office wasn’t sure how Davis would respond to a diminished role. Magic brass also wanted to get Davis “mood swings” out of the locker room, according to Brian Schmitz of the Orlando Sentinel.

It’s no surprise that the Clippers, Nets, HEAT, Spurs and Warriors are considering signing Davis. Each of those teams either tried to trade for a big man at the deadline or have considered signing someone to bolster their frontcourt. Davis is a good post scorer and reserve contributor, a role that he played with the Boston Celtics earlier in his career. Davis won a championship with Boston in 2008.

For those who wondered, I’m told Kings have no plans to buy out either Jason Terry or Reggie Evans.

That being said on the Jason Terry front, have to wonder if Kings’ plans change if he’s as unhappy being in Sacto as some have said.

With that said, it sounds like Terry could become a problem in Sacramento. There have been several reports indicating that he may want a buyout, and Amick’s second tweet came about an hour after the first, as if a source told him that Terry may demand a buyout and get his wish after all.

At this point in his career, it makes sense that Terry would want to play for a winner and not a team that it’s in last place in the Western Conference. He’s 36 years old and in his 15 season in the NBA, so he probably wants to play for a winning team.

The Brooklyn Nets are giving strong consideration to signing Jason Collins to a 10-day contract that would position the free-agent center to become the NBA’s first active openly gay player, according to sources with knowledge of the situation.

Sources told ESPN.com that the Nets, after letting Thursday’s trade deadline pass without making a deal for Los Angeles Lakers forward Jordan Hill, have identified Collins as a prime candidate to fill one of their two open roster spots and bolster a depleted frontcourt rotation via a 10-day deal.

via Ohm Youngmisuk and Marc Stein of ESPN.com

The Nets are weighing several options as they look for a reserve big man, but it’s true that Collins is on their short list of candidates.

They are also considering other free agents, buyout candidates and players who are returning from China now that the CBA season is over.

Collins is 35 years old and he’s a strong veteran presence. Over the course of his career, he has averaged just 3.6 points, 3.8 rebounds and 0.5 blocks, but he’s serviceable and does things that don’t show up in the box score.

If Collins is signed, it would be an excellent story and a huge step for other gay athletes since he would be the first homosexual to play in any of North America’s four traditional major team sports. It would also be great for Collins because it would’ve been awful to see his career end after courageously coming out.