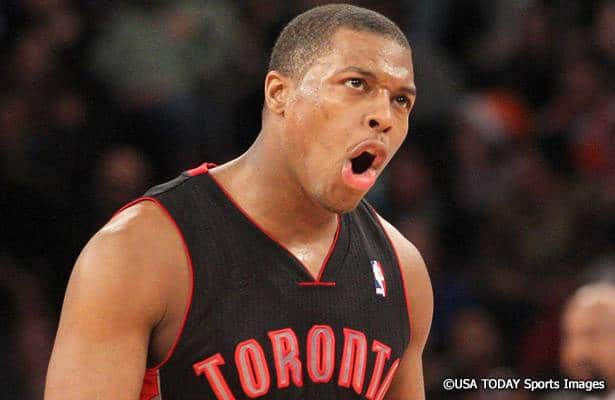 The Knicks are in fact interested in Toronto’s Kyle Lowry. Classic Knicks. Could have had him two months ago, backed out now want him again.

Via Frank Isola of the New York Daily News

The Knicks are clearly in the market for an upgrade at the point guard position and with good reason. They’ve gotten very little production at that spot. One GM recently went on record calling Raymond Felton the worst starting point guard in the league.

The Knicks have their sights set high with Rajon Rondo and Kyle Lowry at the top of their list. Both are likely unobtainable at this point, but as Isola alluded to in his tweet, the Knicks could have had Lowry earlier this season. Talks were serious at one point, but since then Lowry has been playing some of the best basketball of his career. His value has only gone up, while the Knicks’ assets remain just as unattractive as they were the last time these two teams discussed Lowry. Raptors GM Masai Ujiri may be feeling the pressure to cash in on Lowry’s high value now and not risk losing him for nothing this offseason; but considering the team’s strong play as of late, the pressure and appeal of leaving this group together may trump any trade offer – especially one from the Knicks.

If you love NBA trade talk, be sure to pick up Basketball Insiders’ 2014 NBA Trade Deadline Guide. It is 100 pages of new content, with 30 team profiles, tons of features and much more. Download it here!
Grant lost respect of his peers

Beyond selecting Kyrie Irving with the No. 1 overall pick in 2011, Grant made one draft mistake after another. Eventually, he spent his final months on the job calling teams and offering those overvalued young players in preposterous deals for marquee talents. LaMarcus Aldridge. Anthony Davis. Andre Drummond. Eventually, few executives had the inclination to listen to Grant’s pitches on one-sided deals.

This is just one of the several reasons Wojnarowski detailed and brought to light in his latest piece on the demise of the Cavaliers under Grant’s watch.

Making unrealistic offers seems to have been the final nail in his coffin. If Cavaliers owner Dan Gilbert didn’t believe that Grant’s peers were taking him seriously or open to even having conversations with him, he didn’t have a choice but to pull the plug – no matter how abruptly or bad the timing may have seen.

Grant’s job was already rumored to be in jeopardy weeks before he actually got the boot.

He’s been replaced by the highly respected David Griffin, who will basically make or break his future with the Cavaliers over the next eight days. The team is undefeated since Grant’s dismissal, though. It’s going to be interesting to see how that success impacts Griffin’s approach to trades, if at all.

With the Feb. 20 NBA trade deadline nearing, count the Golden State Warriors among the long list of teams still looking to improve its roster.

According to a person with knowledge of the Warriors’ situation, Golden State is on the lookout for bench help and is hoping to use its trade exceptions as a way to facilitate such a deal that would likely need to involve three teams. The person spoke to USA TODAY Sports on the condition of anonymity because of the private nature of trade discussions.

The Warriors have two sizable trade exceptions ($9 million and $4 million) that don’t expire until next summer, as well as two smaller exceptions (approximately $780,000) that expire on Feb. 17.

Amick also reported earlier this week that the Warriors were open to dealing anyone on the roster outside of Stephen Curry and Andrew Bogut.

The Warriors knew that their bench was going to be a weakness after those losses of Carl Landry and Jarrett Jack, two necessary subtractions in order to make room for Iguoadala. Their departures along with Harrison Barnes’ sophomore slump have left the Warriors with one of the worst second units in the league in terms of points per game. They made a move for Jordan Crawford and MarShon Brooks to help address that, but they’re still in need of some additional difference makers behind the starters.