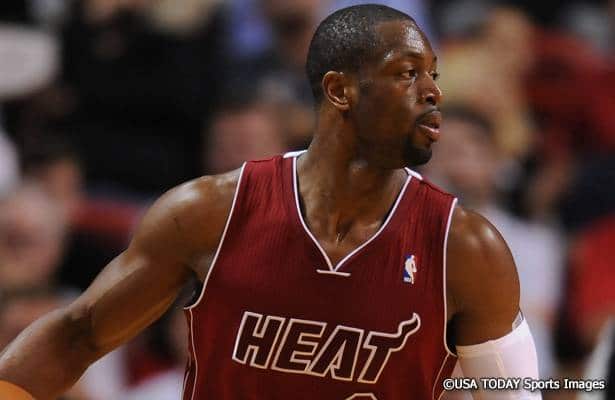 If Dwyane [Wade] provides enough memorable playoff performances, all will be forgotten by the end of the postseason about all these regular-season games missed. That’s where LeBron [James] wasn’t getting the needed support in his previous stops.

But there also will be ways for Dwyane to ease the burden on a re-signed LeBron, perhaps instead of taking the $40 million due over the two seasons after this, to instead opt out and take $60 million over five, ease his cap and tax hit. Of course, it’s easy to talk about someone else taking such a severe salary hit.

via Ira Winderman of the South Florida Sun Sentinel

This is one of the biggest questions as the 2014 free agency period approaches: What will Dwyane Wade do? Wade’s decision this offseason will impact many of the other players and teams this summer.

Wade can either opt in to his $20,164,000 salary for the 2014-15 season or opt out to become an unrestricted free agent and secure another long-term deal. If he intends to stay with Miami, will he take significantly less money so that the HEAT can continue to make moves and contend for championships?

Will LeBron James and Chris Bosh also opt out and decide to lower their 2014-15 salaries? They’ve shown before that they’re willing to take less in order to add more talent to the team. Will they do the same this offseason?

If the Big Three wanted to, they could all take a pay cut and lure another free agent to Miami. Nobody considers the HEAT as players in this summer’s free agency, but that’s ultimately up to Wade, James and Bosh.

Andre Miller to Sacramento or Minnesota?

League contact today via text: “Andre Miller will be a Wolf or King by All-Star break.”

Wolfson has been on top of Minnesota news in the past and what he’s reporting is certainly possible. It seems that Andre Miller’s days with the Denver Nuggets are numbered. The 37-year-old has been benched since Dec. 30 as the team explores their options.

The Nuggets recently tried to trade Miller, but decided to hold off since the offers they received were underwhelming. Rival executives have said that they believe Miller will be dealt closer to the deadline, so a deal around the All-Star break certainly lines up with that.

Wolfson later tweeted that Denver is looking for an expiring deal and a future first-round pick.

It makes sense that Sacramento and Minnesota are being mentioned as potential suitors for Millers, since both teams are in win-now mode and hoping to land one of the final playoffs spots in the Western Conference.


Meanwhile, all of the Lakers’ losses, 16 in the last 19 games, have been killing [Pau] Gasol, who unleashed an expletive-laden tirade on his teammates in the locker room following a 114-105 loss to the Orlando Magic on Friday, as first reported by the Los Angeles Times.

“That’s the most irritated I’ve seen Pau in a long, long time,” said [Kobe] Bryant. “I haven’t really seen him come in and have a tantrum in the locker room which is good, good, something that needs to be done. Can’t be something where losing becomes accepted or the whole ‘we gave it a good effort’ sort of thing. We don’t do that around here. That is not what it’s about. It is not about giving good effort. It is about winning a championship.”

via Dave McMenamin of ESPNLosAngeles.com

Kobe Bryant and Pau Gasol obviously want the Lakers to start winning, but is that what the organization really wants? Or, in a year when they are clearly one of the worst teams in the NBA, is it better to continue losing and secure a top draft pick in what is being called one of the most talented draft classes in recent memory?

Fans of the L.A. Lakers have already started begging for the team to tank and while Mitch Kupchak insists that tanking isn’t in the Lakers’ vocabulary, it is probably in the best interest of the team.

If Kobe Bryant and Steve Nash were healthy, this would be a different discussion. Of course the Lakers would rather be a playoff team this season. However, that doesn’t seem possible. L.A. is currently 16-29, which is the third-worst record in the West. They’re giving big minutes to Kendall Marshall and Manny Harris, two players who were out of the NBA very recently. Ryan Kelly, the 48th overall pick in the 2013 NBA Draft, is now starting.

For struggling teams like the New York Knicks and Brooklyn Nets, it makes to continue fighting and push for a playoff spot because the Eastern Conference is dreadful and neither team has a 2014 first-rounder. For the Lakers, it makes more sense to keep losing, even if it leads to more tantrums from the team’s veterans.