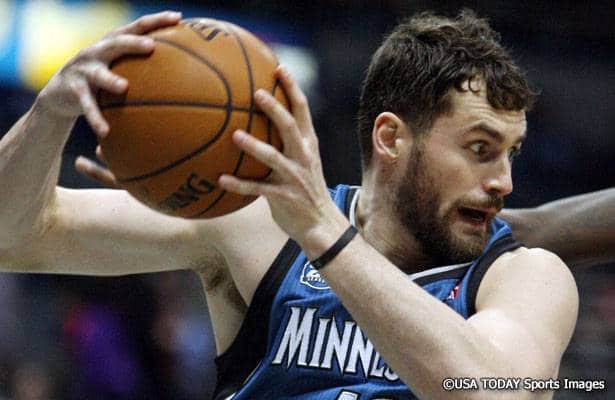 Prior 2 AS break, KL alerted Flip he’ll exercise summer ’15 out & sign elsewhere. Expect him 2B moved B4 deadline or off season.

Still LA has no assets 2 swap & Jbuss is turnoff…

KL will only commit 2 team w winning culture. Meaning Celtics r in his sights, as are Bulls. Both have lots to exchange…

Shortly after Vecsey put out this series of tweets, Timberwolves general manager Flip Saunders came out and flatly denied them.

Rumors of Love telling me he's opting out & wants 2 b traded r false. Last convo I had w/ him was him telling me how bad my sports coat was.

Earlier in the day Timberwolves owner Glen Taylor also said that he hasn’t been presented any trades involving Love. They are trying to build around him still, with their eyes currently set on Memphis’ Tony Allen and Tayshaun Prince.

Regardless of whether they want to deal with it right now, the Wolves certainly have a problem on their hands with Love’s pending free agency. They’re fortunate that he says all the right things publicly. During All-Star Weekend he mocked how easily rumors get started and in an interview with GQ Magazine he voiced confidence in his team and said that they’re better than the Lakers, the team many have reported he wants to join.

However, the threat of losing him for nothing next summer is one they can only ignore for so long. Love’s not going to sign an extension this offseason – but he probably wouldn’t even if he was happy, it’s just not a good business decision – and more competitive teams with better track records are going to come after him hard in free agency. Minnesota, even with the ability to offer him an extra year at $20+ million than everyone else, would still be at somewhat of a disadvantage. They still have time to give him the necessary help to strongly consider staying, but if they don’t do so by this time next year, Taylor is going to have trade offers for Love on his desk awaiting his approval.

Laker plan taking shape: Trade Jordan Hill and Chris Kaman in next 17 hours and they get under tax AND no longer HAVE to trade Pau Gasol

Last tweet what some rival execs now expect Lakes to do. Trade Hill. Trade Kaman. Then roll w/Pau into July to re-sign or sign-and-trade him

Via Marc Stein of ESPN on Twitter/su_note]

Somehow, Gasol looks like he’s going to find a way to survive another deadline. It’s only fitting given how the last few years have gone. This offseason, though, his Laker lifespan almost definitely will be coming to an end. The Lakers could potentially get much higher value via a sign-and-trade than they could have at the deadline, given that they don’t end up moving him before 3 pm EST. In the summer they’ll be able to move him to a team of his choice, a team that actually wants him. Despite the fact that he’s been involved in trade rumors for years now, Gasol will be motivated to work with the Lakers on a sign-and-trade because it will expand his options beyond just teams with cap space.

The Lakers are fielding plenty of interest in Jordan Hill, including the Brooklyn Nets, Cleveland Cavaliers and New Orleans Pelicans. It seems logical to believe that whichever team doesn’t end up getting Hill, Kaman could be an easy sell to.

These minor moves by the Lakers to get under the luxury tax threshold set the stage for some potential franchise-altering transactions this offseason.

This lines up with Adrian Wojnarowski’s latest report that the Raptors were going to be holding onto Kyle Lowry for the playoffs, but questions about the Raptors’ intentions will linger until the deadline passes. Ujiri has had over half a season to evaluate and although the team is playing well this season, he’s not there to make one postseason appearance. He’s there to build a perennial contender and if a move that makes them better in the long-term comes along, we could see the Raptors make some changes despite their current success.

The Knicks had interest in bringing back Clippers point guard Darren Collison and rookie Reggie Bullock as part of a package, but wanted Los Angeles to accept Raymond Felton in the deal, sources said. The Clippers resisted the Felton element of the deal, and were reluctant to part with Bullock or any draft picks in talks, sources said.

Clippers general manager and coach Doc Rivers has been determined to upgrade athleticism on the wings and sees Shumpert as a player who can complement JJ Redick and Jared Dudley. Redick is expected to miss a month with a back injury.

In Wednesday night’s contest Iman Shumpert suffered an injury, so this deal likely would have been doomed even if it was still being discussed.

Attaching Felton to Shumpert seemed to be the only way the Knicks were willing to let him go, which has been enough to scare away every team. Felton is on the books through 2015-16 for just under $4 million a year. It’s his play that scares teams away more than his contract, though. Felton is averaging career-lows nearly across the board; the Knicks are likely going to be stuck with him for the duration of his deal, or at least until it only has a couple months left on it.