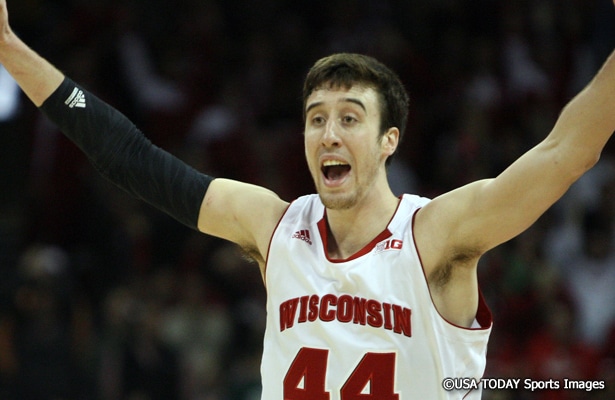 Day seven of the 2014 NCAA Tournament is over. On Saturday, (1) Florida ended (11) Dayton’s magical run, defeating the Flyers 62-52. Then, (2) Wisconsin pulled out a gutsy win against (1) Arizona in a wild overtime finish.

Which players shined the brightest on the seventh day of March Madness? Basketball Insiders put together a list of the day’s studs:

Frank Kaminsky, Wisconsin– On Saturday, no one was better than Frank Kaminsky, who scored 28 points on 11-of-20 from the field, 3-of-5 from beyond the arc and 3-of-4 from the free throw line. Kaminsky also contributed 11 rebounds and one assist.

Kaminsky was an absolute monster. One NBA executive told Basketball Insiders’ Alex Kennedy that Kaminsky, Cleanthony Early and Adreian Payne are the three players who have helped their draft stock the most in the tournament. Kaminsky is not a great athlete, but he showcased his full offensive arsenal tonight. With this performance, NBA teams may look to Kaminsky as a potential Channing Frye type player, with size and range.

Scottie Wilbekin, Florida– Scottie Wilbekin makes another appearance on the studs list. On Friday, Wilbekin put in a clutch performance against the UCLA Bruins in the Sweet Sixteen. On Saturday, Wilbekin scored 23 points on 6-of-14 shooting from the field, 3-of-5 from beyond the arc and 8-of-10 from the free throw line. Wilbekin also contributed one rebound, three assists and three steals in the victory. (1) Florida ended (11) Dayton’s Cinderella tournament run, closing the first half on a 15-1 run and outrebounding the Flyers 37-26. The Flyers, as they have throughout the tournament, competed hard, but the Gators always had an answer and eventually pulled away.

Wilbekin turned in another solid effort for the Gators, playing 38 minutes and hitting 4-of-6 free throws to close the game. Perhaps most important, Wilbekin shut down Dayton guard Jordan Sibert, who went scoreless on 0-for-3 shooting from the field. With the win, Florida advances to the Final Four after losing in the Elite Eight the last three seasons. For his efforts, Wilbekin earns a spot on tonight’s list of studs.

Nick Johnson, Arizona– Nick Johnson put in a solid performance on a night where super freshman Aaron Gordon had little impact on the offensive side of the ball, though he did contribute 18 big rebounds. With Gordon held in check all night, Johnson took the lead for the Wildcats, scoring 16 points on 6-of-17 shooting from the field, 1-of-3 from beyond the arc and 3-of-4 from the free throw line. Johnson also contributed four rebounds and three assists.

Johnson was solid throughout the course of the game, and kept the Wildcats within striking range heading into the end of regulation. However, in overtime, Johnson drove the ball to the rim, and was called for an offensive foul. It was a questionable call, but it came at a crucial time and hurt the Wildcats.

Then, Johnson failed to get a shot up before the final buzzer, ending Arizona’s tournament run. It was an unfortunate end for Johnson and the Wildcats, but Johnson deserves recognition for keeping Arizona in striking distance throughout the night.

Which player impressed you the most on Saturday? Leave your thoughts in the comment section.