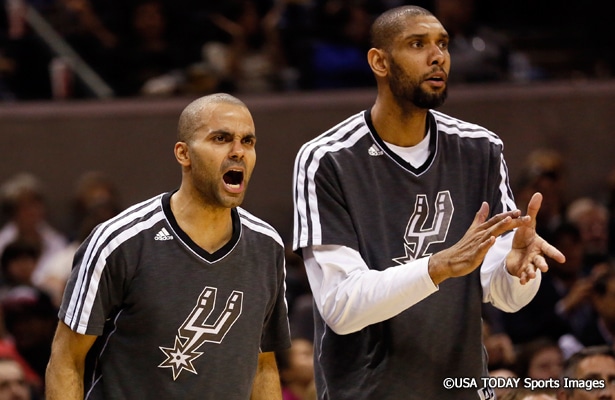 Check out Stephen Curry riding a tricycle while attempting to play one-on-one vs. Jimmy Kimmel. You have to love the always classy Marv Albert on the play-by-play.  Get that $5,000 check ready for the league, Jimmy.

Fan Photo of the Night

Chances are, if you’re rocking the Spurs logo as a neck-tatt, you probably wouldn’t think twice getting this haircut in honor of the Big Fundamental. Not to mention the fact that this may be one of the coolest haircuts of all time! That’s dedication, Holmes.

Apparently, Hugo the Hornet has the J’s…and the ladies. Not certain whether there is a direct correlation there, but let’s just say it cannot be completely ruled out at this point.

The @miamiheat arrive for today's #NBAFinals practice on @nbatv.

The “Heatles” certainly look a lot “cooler” heading into today’s practice session than they did during the Game 1 scorcher!

Take a look at the kicks KD was rocking today. One of the comments says it best…BMore Swag. Durant is from D.C., but did happen to play a lot of A.A.U.ball in the area, which is presumably where the “BMore” comes in.

Up close and personal with George Hill in the “that’s more like it” shot.

“Congrats!” of the Night

OFFICIAL: Jazz Names Quin Snyder Head Coach. “The opportunity to join the Utah Jazz and to be part of such a highly respected franchise with an incredibly bright future is a great honor,” Snyder said. “I approach this opportunity with gratitude and humility and am committed to doing everything I can to help the Jazz become a championship-caliber team.”

Congratulations to longtime assistant Quin Snyder for landing the head coaching position with the Utah Jazz!

Showing the kids how to use a tablet. We dedicated the new Learn & Play Center at Bowden Elementary. #NBACares

When Boris Diaw isn’t spending his time inspiring guys at various levels of being slightly-to-severely out of shape with his play on the court, he still spends time interacting with fans and motivating kids to read and learn. Put simply, Diaw is the man.

This time Kimmel is playing the funniest game of Marco Polo in history…mainly because it involves Dikembe Mutombo running around the streets of Hollywood hiding from a blindfolded Jimmy Kimmel.