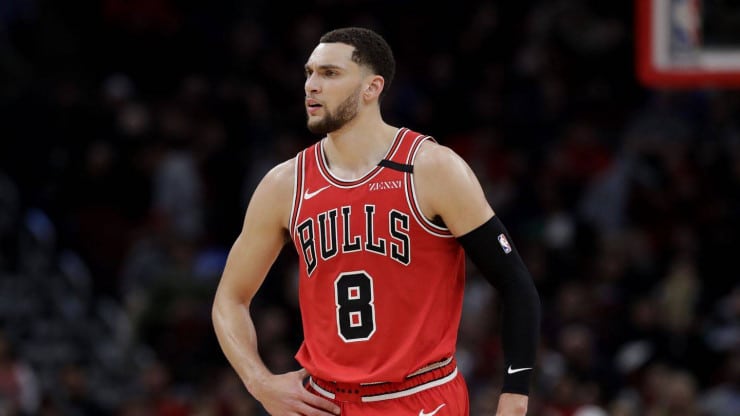 On a chilly March 25 afternoon in Chicago, the basketball world witnessed a minor miracle. The Bulls’ front office made a major move at the trade deadline to acquire a two-time All-Star. That move was a foreign concept to the fans in Chicago, but it sent a signal that the team was serious about winning.

Chicago paid a steep price for Nikola Vučević that day, and while it might not have paid off last season, he has been as good as advertised. The big man from USC averaged 22 points, 12 rebounds and 4 assists per game in a Bulls uniform, starting all 26 games. After eight seasons in sunny Orlando, the veteran felt rejuvenated as he tried to find the chemistry with his new teammates. He finds himself in a similar situation heading into this season, with more new faces arriving in the Windy City.

The Bulls have made some major moves over the past six months. The trade for Vučević was the first big splash, and this summer they made even more big waves as soon as free agency began. Lonzo Ball was the first big name that the Bulls landed, in a sign-and-trade deal with New Orleans. Their next move was signing Alex Caruso to a very reasonable contract.

Chicago wasn’t done. They were able to sign DeMar DeRozan to a multi-year contract as part of a sign-and-trade with San Antonio, without having to include Lauri Markkanen. The move may have solidified their place as one of the top offensive starting units in the league when factoring in Zach LaVine.

All of these transactions came with a price and a lot of unknowns heading into the season. This team oozes with excitement and potential, but also with a multitude of questions. The biggest concern and topic surrounding this team is their defense. Who on this team is going to set the tone on that end of the floor?

While none of the starters in Chicago are known for their lockdown defensive skills, they are all capable of reaching a higher level, both individually and as a group. Ball has the size and athleticism to stay in front of his man, and the length to get deflections. Caruso has been an outstanding perimeter defender and should be able to do the same in his new role. LaVine may be known for his explosive offense and highlight dunks, but he proved that he could be an above-average defender during Team USA’s gold medal run in the Olympic games.

The Bulls will rely heavily on the development of Patrick Williams this season, either as a starter or coming off the bench. With Thaddeus Young no longer in Chicago, he will have to fill that role of being a solid defender who actively plays the passing lanes. They might also lean on their new rookie, hometown product Ayo Dosunmu. The Bulls selected the University of Illinois point guard with the 38th pick in the NBA Draft and may utilize his on-ball defensive prowess throughout the season.

The young talent on the roster is another key area where the Bulls have to get it right. They have forfeited most of their future draft picks in most of these deals, which means they will need to have guys like Williams, Dosunmu and Coby White develop into solid contributors. Chicago still has one of the younger teams in the league, with Williams at the age of 20, Dosunmu and White at 21, Ball at 23 and Markkanen at 24-years old.

That brings us to the next big question.

What is the status of Markkanen, and what does his future look like? This question alone will have major implications on how this team performs this season. Interest has cooled considerably for the once highly sought-after stretch four. The seven-footer from Finland has had his ups and downs in his four seasons, for various reasons. He only started 26 games last season but his shooting percentages from the floor were all career highs.

The No. 7 overall pick out of Arizona still has incredible potential, but the money he is seeking in a new contract is just too much for any team to pony up. With the market all but dried up, his best option as a restricted free agent may be just to play his role in Chicago and hope that another team can put together an enticing deal. Markkanen wants a fresh start in a new place but he might just have to be patient and put on a happy face.

Should the Bulls find a new destination for Markkanen, that would thrust more responsibility on the shoulders of Williams. Avoiding the “sophomore slump” is always key for young players, but with all of the talent surrounding him, he should be able to play his role without much pressure. Having the 4th overall draft pick in a starting role might also alleviate this team’s defensive woes.

In terms of roles, one guy that will see his change dramatically is White. The point guard from North Carolina has looked good in his first two years, averaging 13.2 points per game as a rookie, and increasing that to 15.1 last season. His shooting percentages improved dramatically across the board, especially from the free-throw line, going from 79 percent to 90 percent last year. White will no longer be in his starting role but will be a vital piece for them off the bench.

White had shoulder surgery in the offseason so he hasn’t had much time to work on his game. He will need to cut down his turnovers, as he was in the 27th percentile in that category last season. He can lean on DeRozan for advice on improving other areas of his game, besides shooting. His numbers will likely decrease this season but he has the potential to be a serious 6th man candidate if he can put it together and accept his new role.

Another important piece to this puzzle is Ball’s improved shooting. His incredible turnaround was something to behold, and much of the credit has gone to Pelicans assistant Fred Vinson, who has been labeled as a shooting coach guru. Without Vinson by his side for the first time in three years, it will be up to Ball to maintain his solid stroke from the perimeter.

DeRozan has been a prime example of a player that has excelled at adding to his overall game. His improved scoring efficiency is one thing, but his playmaking development has opened a lot of eyes around the league. He became much more of a facilitator in San Antonio last season, and that is not expected to change in Chicago. He can also still get buckets when the team needs one. According to Second Spectrum, DeRozan ranks third in isolation scoring efficiency since the 2018-19 season. The only players ahead of him in that category are named Stephen Curry and James Harden.

DeMar DeRozan said on No Chill with Gilbert Arenas that Zach LaVine and Nikola Vucevic were recruiting him to come play for the Bulls.

DeMar said he and Nikola had several conversations even dating back to last season. DeMar said the Bulls have been on his radar for a while.

The Bulls have an interesting core that is full of unselfish players that are also elite-level offensive weapons. Ball, LaVine and DeRozan have all shown their playmaking abilities, and Vučević has always been one of the better passing big men in the league. Once they establish solid chemistry, their ball movement should be fantastic in the half-court offense. Their transition game should be even better.

Chicago should be one of the best transition teams in the league. With his size and athleticism, Ball is an outstanding rebounder and can quickly start a fast break. DeRozan and LaVine are also able to do that and push the pace. Those three should be electric in the open court, and even if Vučević is trailing behind, it gives him a great opportunity to spot up from behind the arc. Both he and Markkanen could benefit from the secondary break.

One interesting wrinkle in their offense will be the pick-and-roll opportunities with Vučević and both LaVine and Ball. Though the Vučević/LaVine duo was present at the end of last season, they only were able to play 15 games together. The potential for these three to feast in half-court sets is right there. Don’t discount the idea of coach Billy Donovan incorporating either Caruso or White into the equation as well. He thrived with three point guards on the floor in Oklahoma City with Chris Paul, Shai Gilgeous-Alexander, and Dennis Schroder.

I did some cool editing to figure out how DeRozan and Ball will fit together with Zach LaVine on the Bulls. Would love it if u checked out the whole thing here: https://t.co/hk27gKjZgx pic.twitter.com/4Yw62aK0Kw

There are two more questions that will determine the fate of this team. The Bulls had the fourth-worst turnover rate in the league last season, and they simply cannot afford to give away possessions. White had a large part to do with that, but his improvement and less time with the ball in his hands should cut that down. Ball loves to advance the ball in the open court, but he no longer has Zion Williamson to throw lobs to. Patience and ball security should be a high priority for Chicago’s guards.

Finally, the depth of this team is something that should be taken into consideration. By adding the pieces that they did, it will slide some guys to the second unit. That ultimately makes them deeper, but they also lost some valuable pieces from a year ago. Can they replace the production of guys like Young, Daniel Theis, Wendell Carter Jr and Tomas Satoransky? Other guys will need to step up, namely Troy Brown Jr, Tony Bradley and Denzel Valentine.

The Bulls finished 24th in bench points per 100 possessions last season. With a solid second unit of guys like Caruso, White, Williams and Brown, they should be able to improve drastically in that area. There are a lot of unanswered questions in Chicago, but having the right answers to them could bring Bulls fans back in full force this season.