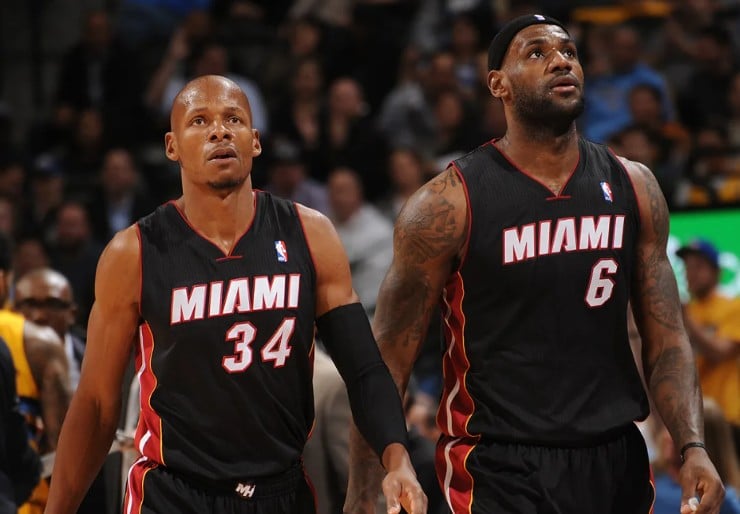 Ray Allen says LeBron James is not the NBA’s GOAT. Of course, Allen was LeBron’s former teammate on the Heat. In a TikTok video posted by Tyriek Weeks, a young basketball star from Commonwealth Academy in Rhode Island, Allen debates with Weeks on which NBA player is the greatest of all time. Needless to say, the argument is always centered around Michael Jordan vs. LeBron James.

When referring to LeBron, Weeks said, “He can score and pass it.” Then, Allen responded back by asking, “Is he a great free throw shooter? Is he a great 3-point shooter? Is he a great dribbler?” After Weeks shook his head to all three of Allen’s questions, the two-time champion asked, “So you’re saying he’s the GOAT when he ain’t even the greatest in all them categories?” Before he walked away, Allen mumbled, “Jordan is.”

Ray Allen will always be remembered as the guy who made the game-winning 3-point shot to tie the score at the end of Game 6 of the 2013 NBA Finals. With only 5.2 seconds remaining of the fourth quarter, Allen’s shot saved the Heat’s season against the Spurs.

Several NBA analysts, such as Skip Bayless, would even go as far as to say that Allen’s 3-pointer saved LeBron James’ career. Now, that comment is a bit much. Though, one less ring for King James would look worse right now. Back then, James was seconds away from becoming 1-3 in the NBA Finals. In 2007, the Cavaliers were swept by the Spurs.

And the Mavericks defeated the Heat in six games of the 2011 NBA Finals. In 2012, the Heat knocked off the Thunder in five games, and LeBron won his first ring. Putting aside the could have, would have and should have arguments, LeBron today is 4-6 in the NBA Finals. Nothing will ever change that.

More importantly, Jordan played in a less foul-friendly era of basketball. It was harder to score against opponents, especially considering the refs would rarely call a foul call. Players were allowed to play. Not to mention, Jordan won more championships and Finals MVPs in fewer seasons than LeBron.

Furthermore, after the Lakers failed to qualify for the play-in tournament in the 2021-22 season, LeBron missed the playoffs for the fourth time of his NBA career. Jordan fell short of the NBA Finals seven times in his professional playing career. But when he was there, the Bulls guard was perfect.

Jordan dominated in a tougher era of basketball

To back up Ray Allen’s argument, let’s compare free throw shooting and 3-point shooting. LeBron’s career free throw shooting percentage is 73.4%, whereas Jordan was 83.5% at the free throw line. From beyond the arc, James has shot 34.6% overall. On the other hand, M.J. retired 32.7% from 3-point range.

However, once again, it was harder to score back then. An argument can be made that Jordan accomplished more in fewer seasons. Other articles related to “Ray Allen: “LeBron James is not the NBA’s GOAT” are on the main page.