There are many routes to the NBA. Some players are drafted and thrive right away. Some players must prove themselves in Summer League, training camp or the D-League to earn a roster spot and then make the most of their opportunity. Some players go overseas, improve their game significantly and then return to the United States more prepared than ever to make an NBA team and have success.

Sometimes, succeeding in the NBA comes down to opportunity. There’s this belief that the gap between an NBA reserve and an overseas player is enormous, but that’s simply not the case. That’s why, each year, players make the jump from playing abroad to playing in the NBA and do well. Sometimes, a player just needs to be in the right place at the right time to showcase their talent to the NBA world. Look no further than Hassan Whiteside as an example of a guy who bounced around abroad – playing in Lebanon and China as well as four D-League teams – before breaking out with the Miami HEAT this season. 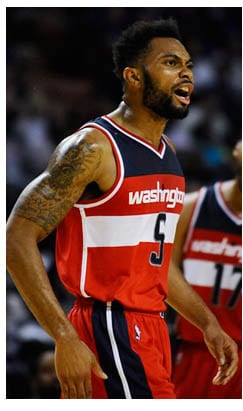 Xavier Silas knows this all too well.

After a stint with the Philadelphia 76ers in 2012, he nearly made the Washington Wizards’ roster this season, but was one of the team’s final cuts. Shortly after, he joined Nea Kifisia in Greece, averaging 11.9 points and shooting 50 percent from the field. While he possesses NBA talent, he has had stints in France, Israel, Argentina and Greece. He’s hoping he can get his Whiteside-like opportunity to play and stick in the NBA, and he’s confident he can do it. He has played well abroad and has seen firsthand just how talented international players are and how they stack up to NBA players.

“I think that it’s something that you can’t understand unless you’re overseas and you see the level of play and the talent that is there for yourself,” Silas told Basketball Insiders. “I think there is a common misconception that the level of play in the NBA is leaps and bounds above the top level in Europe and that’s not true. The best players in the world aren’t only in the NBA, but a whole lot of them are. The goal is to be in that mix, and that’s what I work for. That’s why I’m doing two-a-days in May.

“This year, I enjoyed playing against Olympiacos and Panathinaikos, the two Euroleague teams in the league. My best all-around game in Greece was against Panathinaikos, with 23 points and a 24 efficiency rating. I felt that the Euroleague and the NBA are very similar when it came to the level of play.”

When asked if he still considers himself an NBA-caliber player, Silas is quick to respond.

“I’m an NBA player,” Silas said. “Andres Nocioni was my teammate in Philly and he just won the MVP in the Euroleague Final, and he’s an NBA player, clearly. But it’s not meant for him to be in the NBA right now. The Association has so much to do with persistence and being in the right situation at the right time. If it is meant for me, I will be ready. Either way, I will be working toward being the best player I can be because I truly believe if I maximize my potential, I can be one of the best out there.”

Silas’ basketball talent has taken him all over the world, allowing him to experience things that others can only dream of doing.

“I can’t put my experiences into words,” Silas said. “Being able to go from the Eiffel Tower in France, to the Great Wall in China, to Cristo Redentor in Brazil, to the Parthenon in Athens all through basketball is a blessing. I truly enjoy it, being able to see how all these other people operate and being able to really see how big the world is.”

Over the last few years, Silas has matured – on and off the court. He has expanded his game, as is often the case when a player is made a focal point for a team overseas, and learned a lot from his experiences.

“Over the last four years, I’ve grown off the court, on the court and spiritually a whole lot,” Silas said. “I think the rigorous path I’ve had to walk through the different countries and the D-League and the injuries have given me a mentality that can’t be gained in any way other than experience. It’s a certain toughness that can’t be duplicated and, honestly, it’s created a laser focus that I’m very proud of. I’m hungrier than ever right now.”

The 27-year-old really enjoyed his time in Greece, and he speaks very highly of the city and team he was a part of as well as the supportive fan base.

“My experience in Greece was one of a kind,” Silas said. “I had the privilege of living in one of the nicest suburbs of Athens and one of the nicest neighborhoods in Greece, for that matter. The food was fresh and amazing and when you couple that with the history of Athens and it being the place where democracy was born, it made me grateful to be there.

“The fans are very passionate, especially with the big teams over there. There is a lot of pride and support. I went to go visit my friend, Pops Mensah-Bonsu, who played for AEK Athens, and I was able to be in the stands with the fans and I was amazed at how passionate they are and how much they loved basketball. I was impressed.”

On the court, Silas had to just adjust his game since he was playing a very different style than he was accustomed to for head coach Ilias Papatheodorou.

“My coach was a big fan of Željko Obradović and, for those who don’t know who Željko Obradović is, he is considered one of the most successful coaches in European history,” Silas said. “He won eight Euroleague titles with four different teams. Obradović has a very strict and European style. It would almost remind you of the Princeton offense, with a Euro twist. So in turn, that’s how my coach had us play.

“It’s pretty much the complete opposite of the Golden State Warriors (for the American basketball readers who are having a tough time picturing this). This was new to me and I had never played for a coach who had this style. But being able to experience that and have success within it gave me all of the confidence in the world because if I can play and be a weapon in that system, I can adapt to anything anywhere.”

Silas would love an opportunity to once again play for an NBA team and showcase his skill set on basketball’s biggest stage, but he has also grown to realize that one can have a successful (and lucrative) professional basketball career outside of the NBA. His his goal is just to maximize his talent no matter what jersey he’s wearing or what country he’s in.