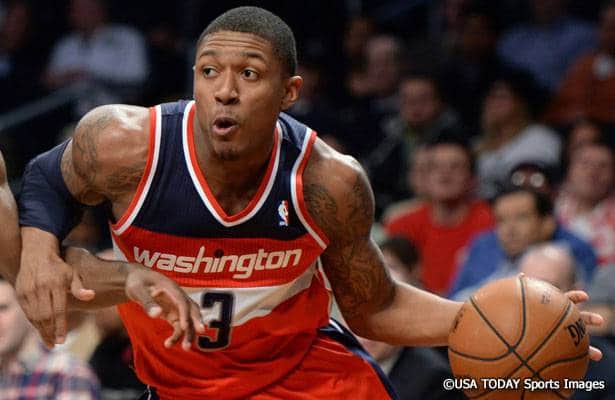 With the trade deadline in many fantasy leagues creeping up in just a matter of weeks, now is the time to start looking through opponents’ rosters and finding values in trade that could potentially help you for the championship stretch later this spring.

The following are a handful of players that, for one reason or another, are probably available for reasonable asking prices at the moment. Grab a couple of them if the price is right.

Eric Bledsoe, Phoenix Suns – Unlike Derrick Rose, who opted to completely repair his torn meniscus, a process that takes several months, Bledsoe’s surgery actually just removed part of the cartilage and should be back on the court in about four-to-six weeks from now. That puts his return at late to mid-February, so it’s very likely he will be available for a strong playoff run. When Bledsoe is healthy, he’s one of the most dangerous guards in the fantasy game, averaging 18 PPG, 5.8 APG, 4.3 APG, and 1.5 SPG, so if you can afford to stash him and pay 40 cents on the dollar for him, by all means, go for it.

Paul George, Indiana Pacers – If there was ever going to be a time that you had a shot and a prayer at acquiring a first-round talent like George, this would be the time. The new year has not been kind to him, as he’s shooting the ball extremely poorly (34 percent from the field and 22 percent from three-point range through his first seven games of 2014) and has only topped the 20-point mark three times in 2014. You’ll still have to give up a reasonable haul to get him, but he’s potentially gettable right now. If he’s on a roster that needs depth and immediate production, there might be a trade that gets him onto your roster for the home stretch.

Andre Drummond, Detroit Pistons – Once in a while, Drummond has one of those huge games that wins you a week of head-to-head all by himself, but he’s terribly inconsistent at times everywhere except at the free-throw line, where he’s always horrible. If that’s a category you’re already punting and the person with Drummond can’t handle those missed charity shots, he’s a guy worth making an effort to acquire. If you’re in a league where free-throws don’t matter, though, you probably aren’t getting your hands on him.

Bradley Beal, Washington Wizards – Since Beal has spent a good chunk of his first two NBA seasons hurt, the Wizards are being overly cautious with his minutes as he’s eased back into a role that at one time this season had him among the league-leaders in minutes played. Currently, though, his numbers are down across the board because he’s playing about 10 minutes per game fewer than he’ll probably be playing by season’s end. He’s not going to command a premium price right now, so he’s very likely worth the gamble for all the points and threes he’s bound to give you.

Omer Asik, Houston Rockets – Since Asik is buried behind one of the best centers in the game in Dwight Howard, he’s nowhere near as valuable as he was last year, when he was one of the top rebounders in the game. Houston is seemingly going to have to trade him at some point, though, and if Asik ends up in a situation where he’s a starter, double-digit rebounds and solid block numbers are sure to follow. He shouldn’t cost you much as a speculative grab, either, so if you can afford a few weeks of slow nights while you wait for a trade, this one could pay off rather nicely. He may even be available on your waiver wire right now, which would be even better.

Kobe Bryant, L.A. Lakers – There’s a really good chance that the guy who drafted Kobe Bryant is one of the angriest guys in your league (right behind the guy that drafted Derrick Rose in the first round), so a lowball offer for a potentially top-tier player expected back before the end of the month could very well be something he or she listens to. The longer you wait, though, the higher the price goes up. Give up someone that can give Bryant’s owners some numbers rather than the goose eggs Mamba has been putting up while healing, and you might just end up with one of the best all-around shooting guards in the league. There’s no guarantee he’ll be as good as he was for most of last season, but if the price is reasonable enough, it sure seems like a gamble worth taking.

What lowball trades have you already pulled off this season? Share them with me on Twitter @joelbrigham, and we’ll keep the fantasy conversation going over there. In the meantime, good luck with the rest of your fantasy season, and may your trades be successful ones!