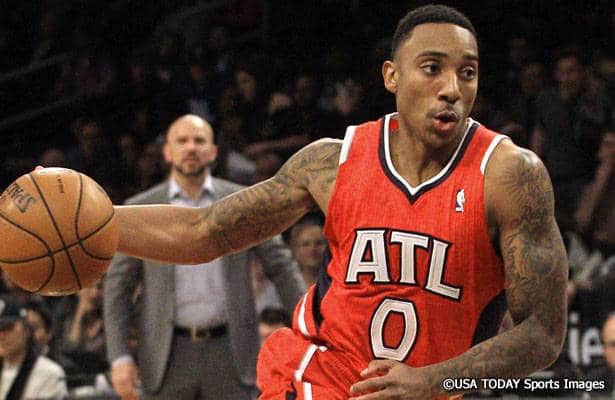 The Atlanta Hawks remain third in the Eastern Conference standings at the midway point, despite losing two-time All-Star center Al Horford for the season. Horford suffered a torn right pectoral muscle in late December, but the Hawks have managed to carve out a respectable level of success without him. Atlanta is headed for their seventh consecutive trip to the playoffs but the loss of Horford puts a ceiling on how far the team can go in the postseason.

#1 – Mike Budenholzer was the right hire at head coach

Hawks president of basketball operations and general manager Danny Ferry had an important decision to make at the end of last season. Ferry had to decide who was going to be the team’s next head coach to bring life to his blueprint. On one hand Larry Drew deserved a look for leading the franchise to three straight trips to the playoffs despite dealing with an ever changing cast of role players. The head coaching market was also loaded with bigger names such as George Karl, Nate McMillan, Stan Van Gundy and Lionel Hollins. All of whom have had solid success leading franchises in years past.

Although the team is hovering around the .500 mark, Budenholzer has done a remarkable job calling the shots from the sidelines in Atlanta and dealing with the loss of Al Horford. The Hawks currently lead the league in assists per game (25.6) and rank in the top 10 in field goal percentage (46%) and three-point percentage (36.7%).

#2  The Hawks have accumulated a solid portfolio of draft assets

When Ferry took control of the Hawks’ front office in 2012 he immediately cleared $90 million of salary off the books by trading Joe Johnson and Marvin Williams to Brooklyn and Utah respectively. While the players netted in those moves are no longer around, the Hawks will benefit in future drafts because of the picks acquired.

The Hawks signed Millsap to a two-year $19 million deal last summer to help fill the void left by forward Josh Smith who bolted to Detroit in free agency. The move has turned out to be one of the best deals in last year’s market with Millsap averaging 17.5 points, 8.3 rebounds and 2.9 assists on 39 percent shooting from three-point range.

The loss of Horford in the lineup has unfavorably impacted Millsap’s overall production, but the forward has become Atlanta’s go to scorer and team leader.

As All-Star weekend nears Millsap should be in the discussion for his first ever selection to the midseason classic.

Entering the season, all eyes were on rookie point guard Dennis Schröder. The team selected Schröder with the No. 17 overall pick in the 2013 draft and he was fully expected to earn the lion’s share of backup point guard minutes this season.

The journey for Mack was a bit different entering training camp where the former Butler University product was locked in a spirited battle with veteran guard Royal Ivey just to earn a roster spot. But Mack quickly moved into the role most believed Schröder would occupy behind starter Jeff Teague.

Not only has Mack earned the trust of Budenholzer, the guard is quickly becoming one of the league’s better backup point guard options.

Mack will be a free agent this summer and has definitely carved out his own niche in the league.

Teague struggled to get consistent minutes in the rotation during his first two seasons in the league, but he is now undoubtedly the team’s floor general of the future. The team re-signed Teague last summer to a four-year $32 million deal and as the season rolls on continues to look like money well spent.

Teague has increased his scoring and assist per game production each season he’s been in the league and has yet to reach his prime. There have been struggles with Teague’s long range shooting and turnovers this season, but the positives far outweigh the negatives.

Expect Teague to be in the All-Star discussion for the Eastern Conference at guard. The Hawks are winning, his production has been consistent and he matches up well statistically with his peers.

#6 – The Hawks will be active at the trade deadline, but don’t expect a major move

The trade deadline is rapidly approaching and the Hawks are armed with future salary cap room, solid draft picks and a few young assets to be active in the market if they so chose. The Hawks are in a unique position where they can play both buyer and seller.

But the Hawks haven’t shown any interest in blowing up the roster to rebuild completely and with Horford sidelined the team isn’t likely to bring in a major asset next month. If the team does decide to jump into trade discussions, the move will likely be minor in nature.

With Horford out, the team may work the market in order to secure another big to help Pero Antic, Gustavo Ayon and Elton Brand on the interior. The club could also look to strengthen its depth at small forward should a favorable option emerge.

Ferry and company will listen to overtures as a measure due diligence but aren’t in a rush to make a deal.