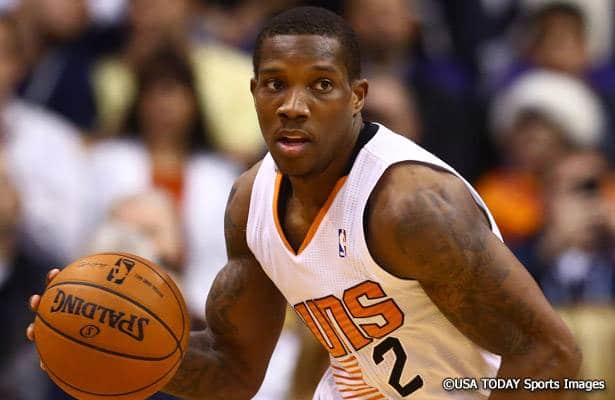 The Phoenix Suns were supposed to be vying for last place this season, not anywhere near the playoff picture. Yet, at 24-17 they’re just three and a half games out of having homecourt in the first round and are 11 games ahead of the last place Utah Jazz. They’re one of the biggest (pleasant) surprises in the NBA this season, and here’s the six most important things you need to know about them.

1. Eric Bledsoe is a star

The hardest thing to do in the NBA is acquire and keep star players. The Suns acquired Eric Bledsoe this offseason in a three-team deal hoping that he could transition from being the best backup point guard in the league to one of the best point guards in the league overall. Based on what he has shown in the 24 games he’s played this season, it’s safe to say that the Suns have their franchise player.

Bledsoe was putting up 18 points, 4.3 rebounds and 5.8 assists prior to undergoing surgery on a torn meniscus in his knee that could cost him the rest of the season. At the young age of 24, Bledsoe is clearly one of the league’s bright stars. The Suns expected this, that’s why they traded for him and tried to sign him to a contract extension prior to the October 31 deadline. While they were unable to, Bledsoe is only going to be a restricted free agent this summer. That means they can match any offer that he receives this summer. There is likely to be multiple teams willing to give him a max contract or very close to it, but there’s nothing prohibiting the Suns from keeping him.

2. They’re in a great position with the salary cap

The Suns do not have one unfavorable contract on their books. They’re well under the salary cap this season at $53 million and only have $23 million in guaranteed contracts for next season, giving them plenty of room to re-sign Bledsoe and still be serious players in free agency.

Before you roll your eyes at the prospect of the Suns landing anyone of note in free agency just because they’re not in a big media market, keep a few things in mind: Bledsoe is the kind of guy who other elite players will want to play with because he’s a fierce competitor and unselfish. Jeff Hornacek is also a player’s coach, being a former player himself.

There have been questions in the past about the franchise’s commitment to winning, but if they give Bledsoe the money that it’s going to take to keep him even with Goran Dragic under contract next year for just $7.5 million, those questions will be answered. They may not be willing to go into the luxury tax, but that’s completely understandable with the stiff penalties in the new Collective Bargaining Agreement – and look no further than the Indiana Pacers and San Antonio Spurs for examples of teams that are championship contenders without paying the tax.

3. Jeff Hornacek was the right hire as head coach

The Suns had several different directions they could have gone in hiring a head coach this past summer. The easiest option was to just remove the interim tag from Lindsey Hunter and see how much he improved from the experience he gained and having a full training camp to work with. There was also several veteran head coaches looking for a job that would have brought instant credibility to the Suns, who needed it at the time.

Instead, first-year general manager Ryan McDonough decided to do exactly what Suns ownership did with him, and give Jeff Hornacek a chance to prove himself.

Hornacek has been outstanding in his first stint as a head coach. He was able to get this young group to buy into his system from the beginning. Rather than paying attention to all the tanking talk that was going on this summer and feeling like the season was a lost cause before it even began, most of the Suns were in Phoenix putting in work. As a result, the Suns have exceeded even the highest expectations for them and almost everyone in the regular rotation is having a career year. Far too often in sports the coach catches all the negativity when things go wrong, while the players get all of the praise when things go right. This isn’t one of those cases, though, Hornacek deserves immense amount of credit. He’s in the mix for the Coach of the Year award, but more importantly, he’s the perfect head coach for this team both in the present and for the future.

Anytime you take over a head position for the first time in your career, your moves are going to be questioned. As McDonough conducted a fire sale this offseason, shipping off the Suns’ veterans for younger, less experienced players, everyone accused him of blatant tanking. Yet, they’re one game off of last year’s win total, and we’re just halfway through the regular season.

The last few years have been difficult for the Suns faithful as they’ve had to come to terms with the Steve Nash era coming to an end without any championships to show for it, despite being so close. It was reasonable for them to have doubts about whether they could ever get to those heights again, but McDonough has quickly given them reasons to have faith. He has this franchise in an ideal position and it only took him a couple months to do so. Just like Hornacek was the right hire despite more experienced options being out there, so was McDonough.

5. Goran Dragic’s value is higher than ever

Coming into the season, it seemed like just a matter of time before Dragic was the next casualty of the Suns’ rebuilding process. Not only did he survive the transition, he’s also playing the best basketball of his career. Dragic is putting up 19.4 points, 3.3 rebounds and 5.9 assists a game. Now all the sudden, his contract, which is paying him $7.5 million this year and the next two (Dragic has a player option for the final year in 2015-16) has as much value as any in the league.

The combination of Dragic and Bledsoe in the backcourt worked surprisingly well. It seemed like the Suns were going to have to choose between the two at some point, but they really don’t have to anymore based on how well they’ve played off of each other.

Until Bledsoe’s name is on a new contract, Dragic is also the best insurance the Suns can have in the case of his unexpected departure. Once Bledsoe is signed, the Suns can shop Dragic if they want with a much higher price tag than this past summer because they’ll have all the power in negotiations. He’s playing the best basketball of his career and they only reason they will move him is if it makes them a better team, that’s the necessary formula to make a favorable trade.

6. They have four first-round picks coming their way the next two years, not including their own.

From all the wheeling and dealing McDonough did this summer, the Suns have a few first round picks coming their way. Here’s a full list of their future assets:

Meanwhile, the only pick that they have going out is their 2015 second rounder. With as much young talent as they already have, it’s a near certainty that they will shop these picks for more proven talent. The 2014 and 2015 draft classes are highly touted and first-round picks are coveted; the Suns will have no trouble getting value in exchange for them.

No matter how the second half of the season goes, there’s a lot of reason to be optimistic about the Suns. The have their star player, a talented young core and most importantly they have the right guys at general manager and head coach. The rebuilding process, if you can even call it that now, is well ahead of schedule. It was hard to imagine these words being uttered back in August but it’s true: the Suns are on their way to becoming contenders again.