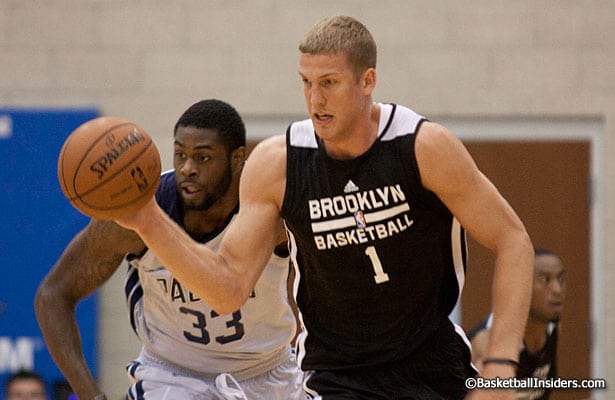 Mason Plumlee had arguably the best performance of the day, scoring 23 points in 23 minutes for the Nets. Plumlee’s experience of playing 70 games in his rookie season separated him from the rest of the players on the court, as he turned in a dominating performance on the first day of the Summer League. Perhaps the most impressive stat of his game was scoring 23 points on just eight shots.

Playing in his first game in the NBA, Noel didn’t disappoint. He came out from the start of the game and showed very little rust after sitting out last season with a knee injury. Noel made six out of his 11 shots from the field and hit all seven free throws. The 76ers have to be happy with his performance today given the risk they took by investing in him.

MUST READ: The 2014 Free Agency Diary, with every rumor on every team.

Caldwell-Pope led all players on the day, scoring 26 points for the Pistons who beat the Rockets 95-89. Caldwell-Pope’s one season in the NBA showed against the younger, less experienced competition as he was able to drive to the rim at will and earn a total of nine free throws in the process. He also was able to shake a few defenders, hit a couple of three’s and showed touch on a few floaters.

Shabazz Napier didn’t prove LeBron James right after his debut with the Miami HEAT on Saturday. James tweeted on draft night that Napier was his favorite player in the draft, but the former UConn point guard followed up James’ claim by scoring 12 points and making just three of his 15 shots from the field, including just 2-of-9 from three-point range. What made matters worse for Napier is he got crossed up pretty badly by Phil Pressey in the first quarter of the game and was visibly upset with himself throughout the game.

CHECK OUT: Our complete salary cap database. Find out how much your team has to spend!

Elfrid Payton’s debut with the Magic probably didn’t blow anyone away. Playing in nearly 18 minutes, Payton scored just two points and had five assists to go along with four turnovers. Payton looked shaky at times handling the ball and wasn’t able to shake many defenders throughout the game.

The Magic’s two first-round draft picks didn’t necessarily justify their place on the team after their first game in the summer league. Gordon struggled from the field, making just three out of his 11 shots from the field and had four turnovers in the outing. Even though the two rookies had rough starts, judging their game based off of one Summer League game is far too early to really grade the two.

Marcus Lewis checked into the last game on Saturday for the Thunder and contributed nothing more than a few rebounds and fouls. In just under eight minutes of action, Lewis committed six fouls, all of them by halftime. Thanks to the no foul-out rule, Lewis could have stayed in the game and added to his stockpile, but was pulled promptly after his sixth foul because any fouls committed after the sixth one results in two free throws for the opposing team.