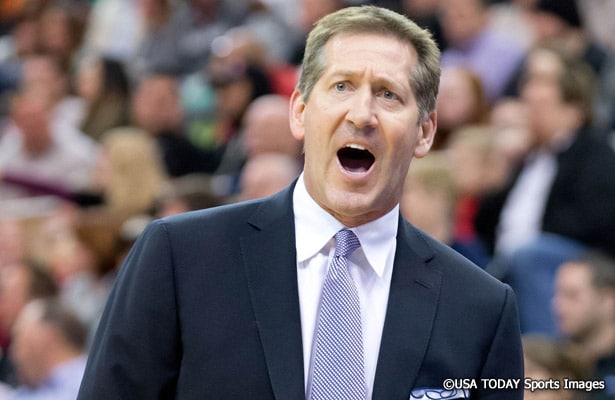 It’s apparently the time of year when teams are interested in honoring former players by retiring their jerseys, with Zydrunas Ilgauskas and Allen Iverson both seeing their numbers head up to the rafters over the course of the last couple of weeks.

Not all players that have their jerseys retired are quite so clear-cut, though. Over the years there have been some really questionable players who have had their numbers retired. Assuming that this is an honor bestowed upon players so legendary that no one else should ever get to wear their number, it’s a small miracle that the players listed below have jerseys in the rafters.

Here are the most questionable jersey retirements in the NBA:

#5 – Vinnie Johnson (#15), Detroit Pistons – For starters, for the majority of his career, Johnson was merely a sixth man. He had some electric scoring performances over the years, but only averaged about 12 PPG for his career. To honor those apparently historic achievements, no Piston can ever wear #15 again.

#4 – The 1977 Portland Trail Blazers – For obvious reasons, Portland is very proud of their 1977 championship team, but over the years the organization has gotten a little carried away with retiring the numbers of players who were major contributors on Portland’s lone title team. Someone like Bill Walton, a Hall-of-Famer, makes sense as an honoree, but some of the other guys are a little more questionable. There’s Larry Steele (8.2 PPG and 1.8 SPG for his career), Bob Gross (9.2 PPG, 4.5 RPG, and 3.0 APG during his seven seasons in Portland), Lloyd Neal (had some good years, but played only 435 games in his career), and Dave Twardzik (fewer than 10 PPG and 3.5 APG in four seasons with Portland). None of those guys were particularly memorable beyond their roles on that 1977 championship team, but they all got their jerseys retired anyway.

#3 – Brad Davis (#15), Dallas Mavericks – As a point guard who has his number retired, one would expect unbelievable statistics, but for Davis’ career he put up only 8.2 PPG, 4.9 APG, and 0.8 SPG. What could have possibly inspired Dallas to retire his number? It’s one of the league’s greatest mysteries.

#2 – Nate McMillan (#10), Seattle SuperSonics – For his career, McMillan averaged 5.9 PPG, 6.1 APG, and 1.9 SPG, and the SuperSonics retired his number. That’s awful, but what’s more awful is that Seattle didn’t get around to retiring Gary Payton’s number before the move to Oklahoma City.

#1 – Pete Maravich (#7), New Orleans Pelicans, and Michael Jordan (#23), Miami HEAT – Obviously nobody would ever question these two Hall-of-Famers getting their numbers retired based on merit, but that merit was recognized perfectly appropriately by the Utah Jazz and Chicago Bulls, respectively, because those are the franchises for which these players actually played. Maravich was never a Hornet or a Pelican (despite the fact that he did play for the Jazz while they were still in New Orleans), and Jordan certainly never had anything to do with the HEAT. There’s absolutely no reason Miami players shouldn’t be able to wear #23.

Junior Bridgeman (#2), Milwaukee Bucks – Bridgeman came over to Milwaukee in the trade that sent Kareem Abdul-Jabbar to L.A., and that’s more or less the extent to which he’s famous. He did play more games in a Bucks uniform than anyone else in history and did put up several double-digit scoring seasons, but he was never an All-Star and didn’t have a particularly memorable career.

Jeff Hornacek (#14), Utah Jazz – Hornacek had only one All-Star appearance in his career, but it happened in Phoenix before he was traded to Utah. After the trade, he scored plenty and was the third-best player on a couple of Jazz teams that made the NBA Finals in the late ‘90s. He had a respectable career, but his Utah experience was not anything worthy of a retired number.

The best explanation for most of these is that the organizations and their fans had emotional attachments to players whose statistics didn’t quite line up with what they meant to people. If that’s not the explanation, it’s hard to nail down why these guys got their numbers retired. They’re all good players, but this is an honor presumably reserved for great ones.