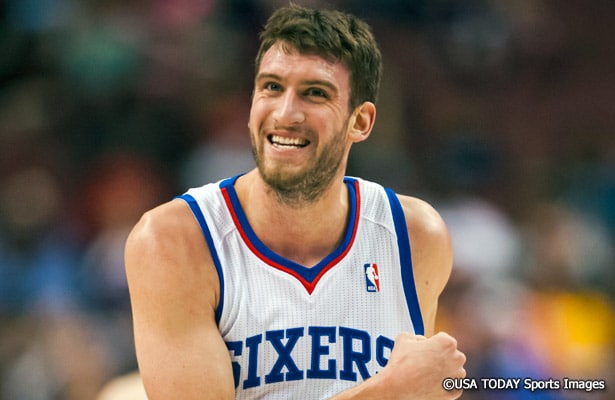 The final 24 hours leading up to the NBA trade deadline proved to be a busy affair — even if only a few of the deals will actually have playoff implications.

How did each team do?

Golden State gives up two players they didn’t need to get a steady play-maker and shooter to fill the Jarrett Jack’s vacant role.

Jack was a major contributor through the Warriors’ playoff run last season but he left over the summer as a free agent.

At 33-22, the Warriors aren’t quite where they hoped to be but Blake should fill that void, allowing All-Star Stephen Curry to play off the ball when needed.

Grade for Warriors: A

The Lakers saved about $4 million including salary and tax.

The team has had their eye on Bazemore since he lit them up for 26 points over in Las Vegas during summer league.

The Pacers lose a steady veteran in Granger, although the forward/guard hasn’t been the same since struggling with knee injuries.

Granger is overpaid ($14 million) for his production (8.3 points a game), but the Pacers risk tinkering too much with their team chemistry after a 41-13 start.

Turner is a more economical $6.7 million, averaging 17.4 points a game.

The 6’7″ forward is just 25-years old and will be a restricted free agent this summer.

Indiana gets younger and more athletic.  If Turner pans out, he could be a long-term fixture with the Pacers, especially if they lose Lance Stephenson in free agency.

First, Turner needs to prove he can fit in with the Pacers.

Their grade is conservative.  The potential for Indiana in the East this postseason is tremendous.

Grade for Pacers: B+

The Sixers didn’t like the idea of giving Turner a qualifying offer of $8.7 million this summer to make him a restricted free agent.

The second-round pick won’t necessarily be a game changer for Philadelphia and Granger may receive a buy-out.

The eighth-place Bobcats (25-30) are fighting to make the playoffs but are within reach of the fifth seed in the Eastern Conference.

Neal is a seasoned, playoff scorer after spending years with the San Antonio Spurs.  The Bobcats need that punch off the bench and Neal has proven to be clutch.

Sessions is one of the better backup point guards in the league but the drop off to Ridnour isn’t significant.  Ridnour may have the better outside shot.

Grade for Bobcats: B

Neal wanted out badly.  Sessions is a solid get.  Jeff Adrien should be a rotation player in Milwaukee.

The Bucks should finish the season with the worst record in the league, which is a good thing when it comes to the 2014 NBA Draft.

Washington Wizards add Andre Miller while sending Jan Vesely to the Denver Nuggets.  Both Washington and Denver send second-rounders to the 76ers, who acquire Eric Maynor from the Wizards.

The Sixers add on a couple of second-rounders for brokering the transaction.  Maynor isn’t a significant get but Philadelphia needed to add on salary.

Grade for Sixers: B

The Wizards are fighting for playoff position in the East.  At 26-28, Washington is still within range of home court advantage.

Miller is coming off of an uncomfortable divorce from the Nuggets.  If he’s in shape, he gives the Wizards an experienced backup to John Wall.

Wall and Miller can even play together, as needed, through the course of a game.

Grade for Wizards: B-

Denver gets rid of a disgruntled player, giving up a second-rounder while adding on Vesely — who has yet to prove his worth in the NBA.

Cleveland has won six straight after a miserable start.  At 22-33, they still have a shot to make the postseason, just three games behind the Bobcats.

Hawes is solid center without an outside shot.

Clark didn’t pan out in Cleveland and Sims was expendable.  The Cavaliers will survive without the second-rounders.

Grade for Cavaliers: B

Philadelphia already waived Clark.  While they would have liked a first-rounder for Hawes, two seconds for the impending free agent is a decent haul considering no firsts were moved at the deadline.

The Nuggets were desperate for a point guard after losing Nate Robinson (knee) for the year — and falling out with Andre Miller.

Brooks is a capable scorer.  He’ll help them this season, but at 25-28 — the Nuggets may not be playing past mid-April.

Grade for Nuggets: B-

Hamilton has been nothing more than a tease.  The 6’7″ athletic forward could give the Rockets a needed weapon on the wing.

Aaron Brooks was helpful when Houston had injuries to Patrick Beverley and Jeremy Lin. As long as those two are sound, the Rockets are fine without Brooks.

Daye has potential but he has yet to reach it.

The Spurs’ track record gives them a half grade bump.  If Daye is going to do something in this league, he’ll do it in San Antonio.

The Raptors add a decent prospect without giving up anything they viewed as significant.  De Colo can be restricted this summer if Toronto gives him a $1.8 million qualifying offer.

A salary dump, important given Mullens has a second-year at his option.

The Clippers will use their open roster spots to pick up bought-out players like Glen Davis and possibly Granger.

The Sixers add a center at the minimum.  Mullens may start for Philadelphia for the rest of the season.

Clippers send Antawn Jamison to the Atlanta Hawks for rights to Cenk Akyol.

The Clippers will be a taxpayer for the first time in franchise history.  The buy-out opened a roster spot and saved a little money.  Akyol may never see the NBA.

The team will meet with Jamison to determine if he’ll play for the Hawks or receive a buy-out.

Miami HEAT dumped Roger Mason Jr. with some cash to the Sacramento Kings for a second-rounder

Miami will never see the pick from Sacramento (protections) but they open a roster spot while saving a little luxury tax.

The Kings will ultimately waive Mason, but receive $500k for their services.