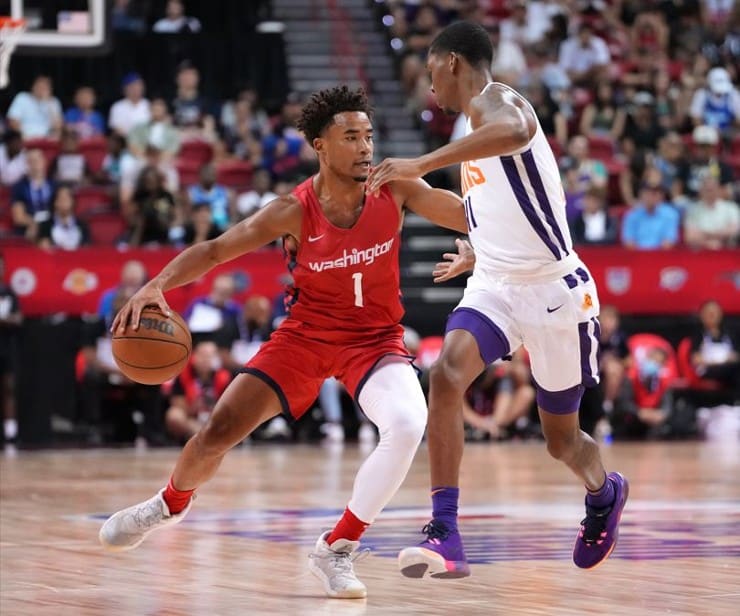 The Washington Wizards have signed free agent guard Devon Dotson and waived guard Davion Mintz. Per team policy, terms of this deal were undisclosed. However, according to sources, Dotson inked an Exhibit 10 contract.

Will the Wizards return to the playoffs in the 2022-23 season? Some NBA betting sites are showing top-15 odds of Washington winning the 2023 championship. Find out which sportsbooks have higher expectations.

Through 22 career NBA games, Dotson has averaged 2.4 points and 1 assist per contest. Plus, he’s currently averaging 50% shooting from the floor and 18.8% from beyond the arc.

For the NBA 2K23 Summer League, Dotson appeared in four games with the Wizards. He averaged 8.3 points, 3.8 rebounds, and 4.3 assists per contest.

On August 13, 2021, Dotson signed another two-way contract with the Bulls.

Last season, in 11 games off the bench with the Bulls, the Kansas product averaged 2.6 points and 1.4 assists per contest. He also shot 47.8% from the field.

Dotson put up solid numbers in the G League. On the other hand, the most he can expect with an NBA team is to come off the bench. The Wizards could still use his help.

Nonetheless, the guard was waived by the Chicago Bulls on January 17, 2022.

As for his NCAA career, in 66 appearances and two seasons played with Kansas, Dotson averaged 14.9 points, 3.8 rebounds, 3.7 assists, and 1.7 steals per game.

He was selected to the Big 12 All-Freshman Team and All-Big 12 Third Team.

Of course, he was then selected to the All-Big 12 First Team and was named a Consensus Second Team All-American. He had a terrific college career.

Next season, Devon Dotson will play for the Capital City Go-Go, the Wizards’ G League affiliate. The guard could get waived in the coming days. If that happens and he spends a minimum of 60 days with the Go-Go, he can receive a bonus worth up to $50,000.

Guards Jordan Goodwin and Quenton Jackson are also signed to Exhibit 10 deals. Not to mention, center Makur Maker is on the list. The Wizards have one two-way spot still available. Forward Jordan Schakel occupies one of the spots.