Connect with us
Home » news » Basketball Insiders Week In Review 315 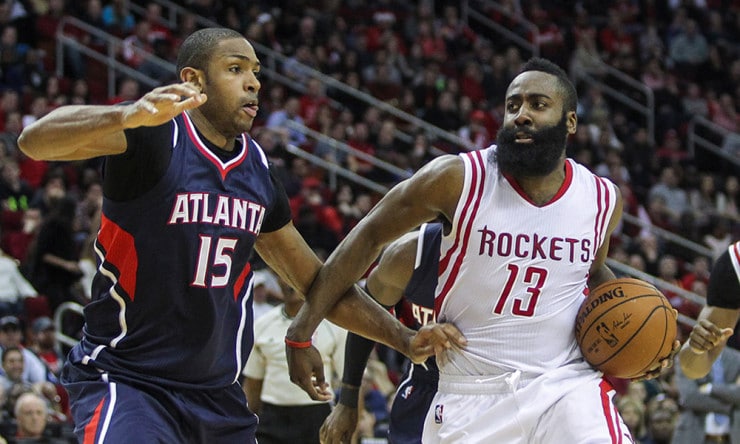 Fantasy Focus: Pickups For The Stretch

It’s a critical time in the world of fantasy basketball as owners are rolling toward the playoffs in their respective leagues. With 20 or so games remaining in the regular season, there is still time to make some strategic waiver wire moves to not only ensure the best seeding possible, but to assure your team is playoff-ready.

While devoted owners have stayed on top of player injuries, moves and minutes all season long, there may be some players available on your wire that have been overlooked or discounted. This is a perfect time to analyze such players and decide if they warrant consideration to boost your roster. Basketball Insiders is here to help you make such decisions.

Paul George is the X-Factor

In the National Basketball Association, the charge toward the playoffs is often dominated by conversations about “What if?”

What if the Golden State Warriors are for real?

What if Kevin Durant is 100 percent healthy?

What if Derrick Rose is finished?

Yet still, almost eight months after the Indiana Pacers’ 2014-15 season was thought to have ended, it is Paul George who has emerged as the biggest “What if?” of them all.

Plenty of Options for Lakers in 2015 NBA Draft

The Los Angeles Lakers are in such dire need of a talent influx that there are several different approaches they can take in June’s upcoming NBA Draft. By now, we all know their pick is merely top-five protected due to the Steve Nash deal with the Phoenix Suns from a few years back, meaning they would forfeit the rights to their pick if they happen to wind up with a draft position from six or beyond. The rights to the pick are now eventually owed to the Philadelphia 76ers (top-three protected in 2016), but the Lakers simply could not afford to lose such an asset thissummer.

As you’ll see from our latest 2015 NBA Mock Draft, this year’s group of prospects is littered with players who possibly contribute to the Lakers’ rebuilding effort as rookies, as well as plenty of first- and second-round guys who could realistically be developed into productive rotation players. While the Houston Rockets are expected to make a run in the postseason (and finish with a worse pick, as a result), the Lakers also hold the rights to their eventual first-round selection in the upcoming draft as a result of the deal that acquired Jeremy Lin last summer.

Is the MVP Race Too Close To Call?

In a normal NBA season, there are usually two clear-cut candidates for the NBA’s Most Valuable Player of the Year award and then a couple of fringe guys that are deserving, but a notch or two below the frontrunners.

This year, not only is the field of would-be MVPs a little bigger, the divide between candidates not only becomes debatable, there may be no wrong answer in the debate.

Now before we get into each candidate and their merits, it’s important to state that the MVP award like most awards is voted on by hand-picked members of the media – often the lead newspaper voices in each market, along with a couple dozen voices picked by the NBA.

We know that what Hassan Whiteside is doing this season is both ridiculous and completely unexpected, but he is by no means the first surprise star to take the NBA by storm. There have been others before him, and this list looks at the best of them.

The players considered for this list were either undrafted or selected later on in the second round. Successful late first-round or early second-round picks can hardly be considered true surprises because teams took them with high picks knowing there was a strong chance they’d work out. To be considered, the guys below had to come out of nowhere.

All that said, here are the top five surprise NBA stars:

Kevin Garnett and Gary Neal were mentioned in quite a few rumors in the weeks leading up to the NBA’s Feb. 19 trade deadline. A number of playoff teams pursued the two veteran players in hopes of strengthening their roster for a postseason run.

But rather than being traded to contenders, both players ended up on the Minnesota Timberwolves – a team that currently has the worst record in the Western Conference and one of the youngest rosters in the NBA. The Wolves parted ways with Thaddeus Young to land Garnett and moved Mo Williams and Troy Williams to acquire Neal (and a second-round pick). That’s because Flip Saunders, the team’s head coach and president of basketball operations, felt it was important for Minnesota’s young core to be surrounded by strong veteran leaders who could help their growth.

Back in the summer of 2013, when Milwaukee Bucks general manager John Hammond executed a sign-and-trade deal that sent Brandon Jennings to the Detroit Pistons in exchange for Brandon Knight, Khris Middleton and Viacheslav Kravtsov, few knew what to expect from Middleton. After putting up modest numbers in three years at Texas A&M, Middleton was chosen with the 39th overall pick in the 2012 NBA draft. In his rookie season with the Pistons, Middleton played sparingly, appearing in only 27 games and averaging just over 17 minutes per game in those contests. Many viewed Middleton as merely a throw-in to the trade, with Knight clearly being the centerpiece.

Livingston Wears Necklace, Bracelet as Symbols of Journey from Injury

The metal necklace that hangs around Shaun Livingston’s neck is subtle but meaningful. So is the bracelet he carefully secures around his left wrist.

Livingston doesn’t want to live in the past — replay the knee injury, dwell on all the teams that shifted him around the league — but he doesn’t want to forget all the hurdles he has overcome to reach this point either. He slips on two pieces of jewelry as constant reminders.

“This is a bolt, like from a toolbox,” he said, lifting the necklace off his t-shirt. “It’s screwed together. I bought it in Paris three summers ago and it was something that reminds me of hard work.”

Victor Oladipo Heating up for the Magic

Over the past week and a half, only Oklahoma City Thunder guard Russell Westbrook and New Orleans Pelicans forward Anthony Davis have been hotter than Orlando Magic guard Victor Oladipo. It seems like quite an accomplishment to be mentioned in the same sentence as Westbrook these days, considering just how amazing he’s has been playing for the Thunder since Kevin Durant needed to undergo a second surgery on his right foot.

Oladipo has averaged 26.4 points, 5.8 assists, 3.8 rebounds and 2.2 steals during his last five outings for the Magic and has converted 52 percent of his shots, including 55 percent from three-point range. His 26.4 points per game during that stretch are third in the league behind Westbrook’s 40.5 points and Davis’ 33.5 points. Oladipo’s 55 percent shooting from downtown is up from his season average of 35 percent.

Please forgive this rather ad hoc post, but this seems as good a time as any to disgorge a few random thoughts that have been rattling around after an East Coast trip.

The Brooklyn Nets played the most desultory game I have seen in person this year, getting absolutely torched in a 115-91 loss by a Hornets squad that ranks 28th in the league in offense and was still missing Kemba Walker.  The defensive performance was so disheartening for the Nets because they were carved up by the same play over and over again, a pick and roll on the left side of the floor.  The Nets did not ice* the side pick and roll, instead letting Mo Williams repeatedly get to the middle and hit the roll man going to the basket or finding direct-line passes to shooters on the weakside.  The well-known gunner racked up a crazy 14 assists in only 31 minutes. The strategy was to bring the opposite big all the way over to the baseline on the strong side to deal with the roll man, and that failed miserably.  But the worst part was Brooklyn never made any visible adjustments.

Harden Gunning For MVP, But Howard Is Key

The Houston Rockets (43-20) currently sit third in the competitive Western Conference standings despite the absence of former All-Star center Dwight Howard for over half of the season. The reason the Rockets have been able to remain relevant in the league’s hierarchy this season is quite simple.

Harden is in the midst of an individual campaign which has thrust the former Arizona State University standout prominently into the league’s Most Valuable Player discussion. Harden is averaging an eye popping 27.1 points, 5.8 rebounds and 7.1 assists on 45 percent shooting from the floor. The sixth year veteran has recorded 27 games with at least 30 points, six of which were 40-point explosions, while only being held in single digits once. Harden, criticized in the past for his defensive inattentiveness, has also made improvements on that side of the floor this season.

The NBA is amazing. Those of us on the periphery get to routinely view (and interview) people who perform daily feats of human athleticism most of us couldn’t fathom in our wildest dreams. The average 2015 fan can watch any game they like for a yearly pittance, and myriad analysis – from the legitimate to the absurd, and everything in between – is readily available at the push of a button. The players themselves get a mostly solid end as well, paid typically well within the seven-figure range and often treated like gods while playing a game they love. The league is on the rise both domestically and internationally, with a major influx of cash due in just over a year. Across the board, there’s very little right for any of us to legitimately complain about.

The remainder of the New York Knicks’ 2014-15 regular season has essentially been rendered meaningless, save for the impact it can have on the number of New York’s ping-pong balls in the draft lottery hopper. Thus, we are looking ahead at brighter days for the Knicks franchise and its fans, when the team will be able to drastically improve their roster via free agency.

Last week, we examined the pros and cons of making a serious (max money) run at Golden State Warriors forward Draymond Green. Today, we’ll look at a number of centers that may be on the Knicks’ wish list in July.

In December, Basketball Insiders looked at the best- and worst-case cap scenariosfor the 2015-16 season, but much has changed through February’s NBA trade deadline.

Players have been dealt, waived, claimed, stretched and signed.  Meanwhile, the NBA’s salary cap is projected to climb to roughly $67.4 million for next year.

In his first three seasons in the NBA, Eric Gordon established himself as one of the best up and coming shooting guards in the league. Drafted seventh overall by the Los Angeles Clippers in 2008, Gordon was considered a young building block and a key member of a young core that would eventually include Eric Bledsoe, DeAndre Jordan, Blake Griffin and Al-Farouq Aminu.

Gordon’s best season with the Clippers came in 2010-11 when he averaged 22.3 points, 2.9 rebounds, 4.4 assists and 1.3 steals per game, while shooting 36.4 percent from three-point range. The Clippers went 32-50 that season, missing the playoffs for the fifth season in a row. However, the future was bright for a team that had a roster composed of up-and-coming young players, effective veterans like Chris Kaman and Mo Williams and a valuable 2012 first-round draft pick from the Minnesota Timberwolves (that was expected to land in the top-10 that year).