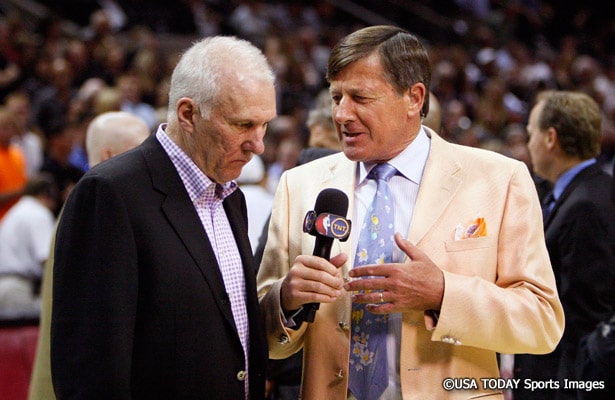 Earlier today Craig Sager’s son tweeted that his father, one of the most popular sideline reporters in all of sports, will be out for the next couple of weeks due to leukemia. Support came through in abundance as he begins this trying battle. Basketball Insiders would like to join everyone in wishing him a speeding recovery.

Prayers to the dean of NBA sideline reporting and his family. Get well soon, Craig Sager!

So sorry to learn about the news that @TNT _CraigSager is battling Leukemia – Think POSITIVE – Have Faith buddy http://t.co/Qrnbi5FBuk

Wishing @TNT_CraigSager all the best with his battle with leukaemia. Speedy recovery back to court side.

Craig Sager will be in my prayers on Easter. A true pro and gentleman who was very supportive of me when we shared a mic last Summer League.

Best wishes to Craig Sager and his family as he battles Leukemia. Incredibly nice guy behind the scenes.

Prayers for Craig Sager as he begins leukemia treatment.

Thoughts and prayers go out to Craig Sager. http://t.co/fIGTujxSJB

Can't wait to see Craig Sager back at an NBA gym.

All the best to @TNT_CraigSager during treatment. Watching NBA is just better with him involved. Ask KG. https://t.co/zVNFNTSz0T

I won't pretend to "know" Craig Sager but have spent time around and with him. Good guy. Doesn't big time. Has good questions in interviews.

Thoughts and prayers with @TNT_CraigSager and his family during his battle with leukemia. Good guy and I wish him all the best.

Sad to hear we won't see Craig Sager these playoffs. Wishing him a healthy recovery. His professionalism and hideous suits will be missed.