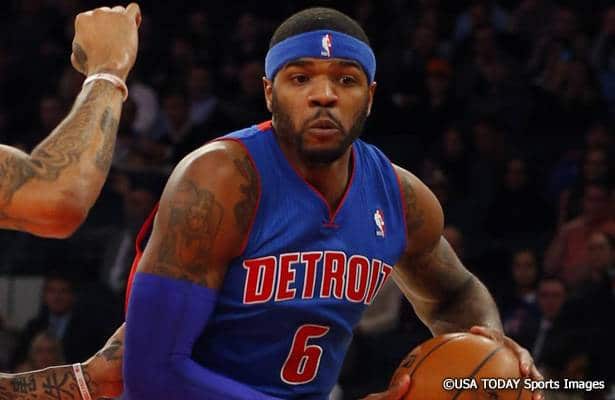 Every year we have the same conversation about deserving players losing out on an opportunity to participate in an All-Star game, but while being slighted once is painful enough, getting passed over for the duration of one’s career can be borderline humiliating, as the players on this list discovered at the end of their time in the NBA.

A couple of these players still have a few years left to receive their opportunity, but as most of the other players on the list will confirm, time runs out really, really quickly in this league.

Here are the best players that never were named to an All-Star squad:

Mike Bibby – Back in the early 2000s, when he was a member of the perennially awesome Sacramento Kings, Bibby was well-respected and generally accepted as one of the best point guards in the NBA. In 2004-05, for example, Bibby averaged 19.6 PPG and 6.8 APG for the Kings, which he followed up the next year by scoring a career-high 21.1 PPG and still dishing out 5.4 APG. Chris Webber, Peja Stojakovic and Vlade Divac all made All-Star teams during Sacramento’s hot run at the turn of the century, but Bibby never did, despite the fact that he was as deserving as any guy on this list.

Damon Stoudamire – While Stoudamire did most of his winning with the Portland Trail Blazers, he definitely did his best individual work as a member of the Toronto Raptors his first few years in the league, where he averaged 19 PPG and 9.3 APG his rookie season and 20.2 PPG and 8.8 APG during his sophomore campaign. His numbers dropped off considerably after the move to Oregon, but an argument could certainly be made that one of his first three seasons in the league deserved All-Star attention.

Marcus Camby – A former Defensive Player of the Year, Camby has seen success pretty much everywhere that he’s played. In 2006-07, as a member of the Denver Nuggets, Camby averaged 12.2 PPG, 11.7 RPG and 3.3 BPG, and there were some earlier years with New York that resulted in plenty of double-doubles and game-changing defense, as well. Truthfully, he’s not all that different from Tyson Chandler, who mercifully was named to his first All-Star team in 2013 despite being one of the NBA’s all-time defensive game-changers at the position. The difference between Camby and Chandler, though, is that Camby doesn’t look like he’ll ever get his opportunity.

Andre Miller – He’s just a backup point guard in Denver now, but earlier in his career, Miller was one of the league’s nastiest point guards for the Cleveland Cavaliers, L.A. Clippers, and Denver Nuggets. Of course, the common denominator is that those teams were awful when Miller played for them, and that compared with his general lack of athleticism and flash didn’t make him a particularly exciting addition to the midseason exhibition, despite the fact that his numbers support him as an All-Star. In 2001-02, for example, Miller led the league with 10.9 assists while chipping in 16.5 PPG and 1.6 SPG. That’s an All-Star point guard’s line if ever there was one.

Josh Smith – The only guy on this list with any real chance of getting himself off of this list, Smith is also the player with the most impressive statistical support for the All-Star appearance that has always been just out of his reach. As the only player in NBA history to average at least 15 points, seven rebounds, three assists, two blocks and a steal per game over the course of his career, Smith is a truly unique player, but for the majority of his career he’s been a forward that has been voted out in favor of bigger names at the position like LeBron James, Carmelo Anthony, Kevin Garnett, Paul Pierce and Chris Bosh. Chicago’s team success in recent years even resulted in Luol Deng making two straight All-Star teams from 2012 to 2013. Stats also aren’t everything, and Smith really doesn’t have the same star power as some of his colleagues. Whatever the reason, he’s still never been an All-Star.

Phil Ford – This is a guy from a different era, but Ford was the Rookie of the Year in 1979 and was actually named to the All-NBA Second Team that same season. His career sort of went downhill from there, but he’s one of only a handful of players in NBA history to have an All-NBA Team accolade to his name, but not an All-Star selection.

Rod Strickland – Despite the fact that Strickland said he wouldn’t show up for the All-Star game if he was ever selected to it, he unfortunately was never even given the opportunity to boycott the festivities. He made an All-NBA Second Team in 1998 and finished among the top 10 in the league in assists seven times in the 1990s. He was kind of a curmudgeon while he played, but was perennially underrated anyway. B.J. Armstrong has an All-Star appearance under his belt, but Strickland, clearly much more deserving, does not.

While it hurts for some of the young guys that didn’t make the team this year, Andre Drummond and Anthony Davis clearly have several years’ worth of All-Star appearances ahead of them. Some equally deserving players, however, just never got the chance.

Augustin Could Be Long-Term Backup Solution in Chicago

Chicago fans were collectively rather sad when it became clear that John Paxson and Gar Forman would not be re-signing little-engine-that-could Nate Robinson last summer, but everybody seemed to understand that the money just wasn’t going to be there to pay for his return.

With Derrick Rose out for the entirety of the 2012-13 season, someone like Robinson was necessary. He showed how even a small point guard, if aggressive, could thrive in an offensive system designed for someone like Rose. He was, to put it bluntly, awesome in last spring’s playoffs. It was a perfect fit both for him and Chicago, and just having him around won the team a first-round series against the Brooklyn Nets they probably wouldn’t have won otherwise. But with Rose returning and Robinson looking for a bigger payday, it was inevitable that Robinson wouldn’t be re-signed.

The Bulls had hoped that Marquis Teague would step into that Robinson role this season, but when that didn’t happen the team went ahead and signed D.J. Augustin about 20 games into the year.

People who know basketball rolled their eyes at the first 10-day contract because Augustin was a punchline in Indiana last season, but since joining the Bulls he has played some of the best basketball in his career. In 25 games this season, he’s averaged 13.7 PPG, 6.0 APG and 1.2 SPG, all of which are either career-highs or extremely close to career-highs. He’s also shooting 42.7 percent from three-point range, which has made him an invaluable asset for a team that is 26th in the league even with Augustin shooting so well.

Like Robinson before him, Augustin is undersized but capable and thriving in a system designed for a speedy point guard. Chicago is currently the fifth-best team in the Eastern Conference, only a single-game behind the third-place Toronto Raptors, but it’s hard to believe they’d be there without a capable point guard. Kirk Hinrich has missed about 20 percent of Chicago’s games this year due to injuries and Teague has been jettisoned off to the Nets. Meanwhile, Augustin has effectively kept the Bulls in contention for homecourt advantage in the first round of the playoffs, which is something very few people saw coming.

Unlike Robinson, though, Augustin isn’t likely to expect the kind of payday that Robinson thought he’d ultimately get last summer, which means Augustin could actually be affordable (and apt) as a long-term solution for the Bulls as the backup point guard.

Everyone in the game would love to see Rose come back stronger than ever next season, but based on the issues Russell Westbrook and Dwyane Wade are having this season in the wake of their own meniscus surgeries, this really isn’t the time for optimism. Rather, it’s time for practicality, and since Rose makes so much money the Bulls will need to find an affordable but capable backup should Rose miss extended time at any point over the remainder of his massive contract.

Augustin, clearly, can shoulder that burden. He can perform in their system, he can play with this group and he can live up to this coach’s lofty expectations. The Bulls won’t likely be priced out of holding onto him, but based on what we’ve seen the last two seasons from Augustin and Robinson (and Rose, for that matter), whatever Chicago has to pay is probably going to be worthwhile.

As we’ve already seen, this core of Bulls players can be a perennial playoff team without their best player, but only if the backup point guard is someone who can hold down the fort. Augustin has proven he can do that, and Chicago can’t afford to let him go the same way they did Robinson.