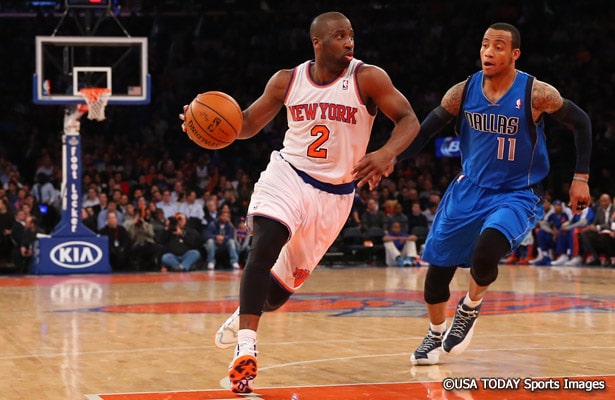 The New York Knicks are in the midst of a skid in which they’ve lost eight of their last 10. They’re five and a half games out of the playoffs and soon-to-be free agent Carmelo Anthony has never seemed more down as even his most impressive scoring efforts haven’t been enough to lead his team to victory. The last thing this team needs is more distractions, but on Wednesday when the recently arrested Raymond Felton returned to practice, his legal troubles trumped everything else Knicks related.

Felton is going to play the rest of the season with pending felony firearm charges, but tried to downplay the distraction in a statement to the press, after which he did not answer questions.

“I want to start off by saying thank you to my teammates, thank you to the fans,” Felton told reporters after practice without taking any questions. “To my family, to my friends, everybody for their support in this situation. This is not a distraction to this team. I’m focusing on finishing out this season, finishing out these games with my teammates. As far as speaking on what’s going on off the court with me, there will be no comment. If you’ve got any questions, anything dealing with that, speak with my lawyer.

“I’m here to concentrate on this team, finish this season out with the New York Knicks and see what happens, man. Trying to make it to the playoffs. We’re five and a half games out, 25 games left, so I’m really focusing on that with these guys, with the team and trying to make that happen.”

Felton turned himself in early Tuesday morning after charges were made, and posted a $25,000 bail. He can travel with the team, but has been prohibited from contacting his wife, who accused him of pointing a gun at her, for the next six months. His case will resume on June 2. If convicted, Felton could face anywhere from two-to-seven years in prison.

Despite the unneeded attention and criticism this has brought the franchise, Felton’s teammates and head coach voiced their full support.

“Honestly, I don’t think that’s any of my business,” Tyson Chandler said to Ohm Youngmisuk of ESPN New York. “My concern is him as an individual, as a friend, teammate, brother, and [when] when he’s ready to play basketball, go out there and fight with him.

“He seemed like he was no different than when I saw him at [Monday’s] game. He seemed very focused, very attentive to what was going on as far as our game plan for Miami. Like I said, if it wasn’t for all the media, I wouldn’t know what was going on.”

As much as this should just be a private matter between Felton and his wife, it’s never going to be that because nothing involving the Knicks flies under the radar. There’s no privacy under that spotlight in that media market, and until the case is closed it will be something that is talked about and a black mark on a Knicks franchise that has seen better days.

Felton too has seen better days; even before this conflict he was serving as one of the scapegoats for the Knicks’ shortcomings. He’s averaging a career-low 10.4 points per game while shooting 40 percent from the field and 29 percent from deep. The Knicks tried to trade him prior to the deadline, but even packaged with Iman Shumpert, they were unable to do so.

The Knicks and the NBA are going to let the legal process play itself out before deciding if they are going to punish Felton.

With 25 games left in the regular season, the Knicks have to go on a monster run to get into the playoffs. The Atlanta Hawks are floundering and giving the Knicks something to play for still, which they wouldn’t have if they were in the Western Conference with the same record, but they’ll also have to be better than the Cleveland Cavaliers (five games out) and Detroit Pistons (three and a half games out).

The Knicks are in the process of signing Earl Clark and Shannon Brown to 10-day contracts. Those agreements were basically in place prior to Felton’s arrest; the Knicks could look for point guard help once those expire, especially if Felton’s off-the-court issues impact his play on the court.

The latest on free agency

“A trade is never easy, especially when you have been with one team your entire career,” Granger said. “But, the professionalism, honesty, time and care the Philadelphia 76ers spent on my situation made me feel appreciated and confident we would reach a mutually beneficial resolution. I would personally like to thank the 76ers, General Manager Sam Hinkie, head coach Brett Brown and the rest of their organization for taking the time to get to know me, understand what I am looking for, and help me to find a result that makes the most sense for my future, as well as their own. While my time with the 76ers was brief, it was clear to me that they have the vision, leadership and plan to be very successful. I feel extremely grateful and wish the 76ers all the best.”

Adrian Wojnarowski of Yahoo! Sports reports that the Los Angeles Clippers are the leaders for Danny Granger. The San Antonio Spurs, among other contenders, have been mentioned in association with Granger as well.