Who is George de Paula?

At first glance, George de Paula (also known as George Lucas) seemed out of place at the NBA Draft Combine in Chicago. As he sat at a table talking to reporters, the Brazil native nervously took in his surroundings and, at times, looked like a child in comparison to his fellow NBA draft prospects. 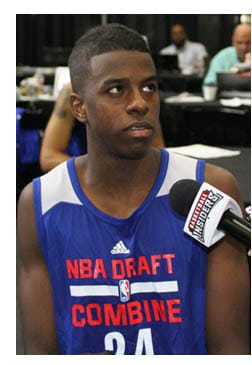 That’s because, well, he sort of is. De Paula is just 18 years old – one of the youngest players in attendance at the NBA Combine – so it’s no wonder he has a baby face, wide-eyed stare and braces.

And the reason he seemed a bit scared? That’s because, he says, the interviews were just the second time that he’s had an English conversation in America. Prospects without a language barrier are often nervous when they’re interviewing with media and teams in this environment, as anything they say can affect their draft stock. Going through the process without a firm grasp of English is even more terrifying.

How would you respond if your next job interview required you to travel to another country and speak to your potential employer and a huge television audience in a foreign language, when you had only taken basic high school courses to prepare you? There were a few misunderstandings – and de Paula paused, smiled and apologized at times – but he did an absolutely incredible job interacting with the media considering the circumstances.

Then, the moment he concluded his media session and stood up from his table, he immediately stopped looking like a kid and it was obvious why NBA executives are falling in love with him.

De Paula is an amazing physical specimen – a 6’6 point guard with a 7’0 wingspan and abnormally large hands that measured in at 10.75 inches wide and 9.5 inches long. He has the longest wingspan and largest hands of any point guard in DraftExpress’ extensive database, and he had the second-longest hands of any player at the combine (even bigger than most centers’ hands). De Paula hit the genetic lottery and NBA teams are very interested, especially since the 18-year-old may not be done growing.

While at the Combine, de Paula says he met with the Los Angeles Clippers, Utah Jazz, Brooklyn Nets, San Antonio Spurs, New York Knicks and Philadelphia 76ers, and he has plenty of workouts scheduled as well. During the interviews, teams were mainly getting to know de Paula, asking a lot about his childhood and family.

NBA fans will soon get to know de Paula too, as he’s one of the most intriguing prospects in this draft class. He is clearly a project, since his game is very raw and he’s still a work in progress. However, don’t be surprised if de Paula goes late in the first round or early in the second since his amazing potential and physical tools will certainly attract teams. At that point in the draft, he’s worth taking a flier on to see what he can become. He’s essentially this year’s Bruno Caboclo, who was a relatively unknown Brazilian player that surprisingly went No. 20 overall to the Toronto Raptors last June after wowing executives around the NBA with his freakish wingspan and crazy potential.

De Paula has been training at the IMG Academy in Bradenton, FL, with a number of other draft prospects. The training staff at IMG raves about de Paula’s work ethic and upside. The teenager is really enjoying himself throughout this journey and he’s making the most of the pre-draft process.

“It’s the best adventure I’ve had all my life,” de Paula said. “I feel confident to be here. It’s my dream, I worked hard every day since I was 8 years old and it’s been my dream.”

De Paula’s strengths are his size, playmaking ability and ability to penetrate. He did a great job creating for others and handling the ball during the Combine’s five-on-five. He is also getting better at taking advantage of his size and length, and he displayed his versatility and defensive potential at the Combine by guarding multiple positions.

However, there are several aspects of his game that he needs to continue to work on since he’s so early in his development. He is trying to become a better defender, which should come in time since his physical tools should make him a match-up nightmare for opposing point guards. He has also been working on his jump shot while at IMG, which is a huge part of his development. He can be inconsistent with his shot and, as he acknowledges, needs to overcome his nerves and improve his confidence.

“Everybody says that I’m not a shooter, but I think that I’m developing my shot,” he said. “Sometimes I’m nervous and will do air balls, but it’s a psychological process for me.”

The good news for de Paula is that most of his weaknesses are things that should improve as he continues to train and gain experience. As he tries to expand his game, he says he enjoys watching Deron Williams, Kyrie Irving and Mike Conley – three players he tries to take various things from.

“I like a lot of point guards,” De Paula said. “Deron Williams, because I have the same physical tools. I like the ball-handling of Kyrie Irving. I like Mike Conley because he’s a lefty point guard.”

When asked to sum himself up for people who may not know much about him, de Paula kept his answer simple and sweet.

“I’m a point guard, I’m 6′[6] and I like to play good basketball, like sharing the ball and making other people happy,” he said with a big smile.

De Paula may have to play in the NBA Development League for some time before he’s able to contribute on an NBA roster. But if he is able to continue his development and eventually reach his full potential, in a few years he may be making his teammates very happy and driving your favorite point guard crazy.

This afternoon, the NBA announced their All-Rookie Teams.

This season’s Rookie of the Year, Minnesota Timberwolves swingman Andrew Wiggins was the lone unanimous choice, receiving 130 First Team votes from a panel of sportswriters and broadcasters throughout the United States and Canada.