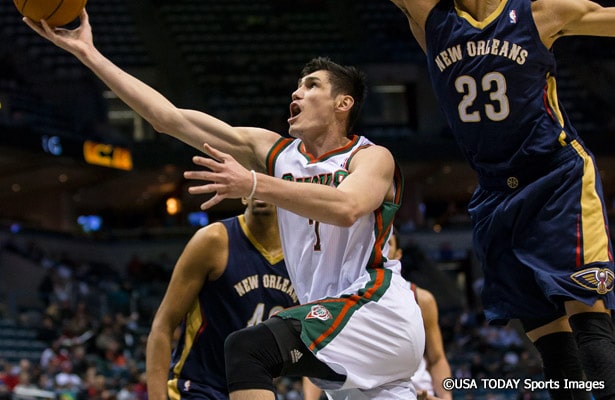 Ilyasova, Neal on the move?
Ilyasova is arguably the Bucks’ best trading chip and several teams are believed to be interested in him. According to multiple sources, Ilyasova has expressed a desire to be traded, apparently having had his fill of the Bucks’ continual rebuilding project.

Ilyasova downplayed talk about him wanting out of Milwaukee and declined to comment on whether he or his agent, Andy Miller, had requested a trade.

* According to league sources, Bucks veteran backup shooting guard Gary Neal and his agent, David Bauman, have talked to Hammond in recent weeks about the possibility of a trade.

Via the Racine Journal Times

Fresh off of signing a four-year contract that will pay him $7.9 million through 2015-16 (only $400K of the $8.4 million owed to him in 2016-17 is guaranteed), Ilyasova has seen his efficiency and productivity drop off significantly. If a team trades for him, it’s not going to be because he’s the Bucks’ best asset. He’s far from it, especially based off of how he’s played this year. They’re going to be trading for him because they believe in their system’s ability to get him back to playing like he did the last two years where he earned that long-term contract. Caron Butler, whose $8 million contract is expiring this offseason, is far and away the Bucks’ best trading chip.

Gary Neal is also much more tradable than Ilyasova. With a contract that only has one more year on it after this season for $3.2 million, Neal could be an attractive option for a contending team needing a shooter off the bench to keep opposing defenses honest. While he’s appeared unhappy at times, he’s still remained a viable contributor, scoring 10.2 points a game – a career high.

The Charlotte Bobcats, clinging to the eighth playoff spot in the East, will be aggressive buyers at the deadline, league sources say. The team’s interest in Sixers guard Evan Turner is real. Philadelphia GM Sam Hinkie wants a first-round pick for Turner (and the same for Spencer Hawes). The Bobcats can offer their Detroit pick if they’re serious about making a push.

It’s going to be interesting to see whether the Bobcats are willing to pay the price to be a playoff team at the deadline. They spent big money on Al Jefferson this offseason and have made it clear that they are in the market for a “win-now” piece like Evan Turner would be, but is the price of Detroit’s first-round pick too high?

The pick is top eight protected; currently the Pistons are projected to draft 10th. Hypothetically, if the Bobcats and 76ers did swing a deal for Turner, the 76ers would have three lottery picks. By doing this trade, the Bobcats are banking on Turner being better than anyone they could draft in that range, and that they can keep him this offseason.

The Bobcats gave Gerald Henderson a three-year, $16 million contract this summer. He could become expendable in the case that Turner is acquired and re-signed.

The Bobcats have the $13.2 million expiring contract of Ben Gordon. A combination of Gordon and the Pistons’ pick for Turner and Hawes could be a win-win deal for both sides, it’s just all about whether the Bobcats are willing to sacrifice a quality draft asset to try and solidify their spot in the playoffs.

IN RELATED: The latest NBA news and rumors

Among the options that the Cleveland Cavaliers are weighing as they start to conceive a new front-office team is making a bid to persuade veteran agent Mark Bartelstein to leave the representation game to join them, according to sources briefed on the matter.

Sources told ESPN.com this week that the Cavs have interest in trying to recruit Bartelstein into their management structure as other teams have done in recent years, most notably the Phoenix Suns’ hiring of Lon Babby and the Golden State Warriors’ hiring of Bob Myers.

Bartelstein, who heads up Priority Sports & Entertainment with 31 NBA players under contract, is one of the most well respected and experienced agents in the industry. His top-paid client is Golden State Warriors forward David Lee, but his players are bringing in $91.9 million that he’ll be making a percentage off of this season, next season he has $68 million guaranteed before any new contracts are agreed to, and a minimum of $47 million in 2015-16. Those figures also don’t include the draft prospects he’ll sign in coming years. Bartelstein frequently lands top talent, having Mason Plumlee and Tim Hardaway amongst others last year. While there’s a lot of prestige and notoriety that comes with being a general manager, Bartelstein could end up taking a pay cut if he made the move.

Before seeing what Cavaliers interim general manager David Griffin does at the deadline and how the team finishes out the year, it’s really too soon to take any out-of-house candidate too seriously. Once we’re on the other side of the deadline and especially at the end of the season, it’ll be easier to project who Cavaliers owner Dan Gilbert wants to replace Chris Grant with long-term. It’s Griffin’s job to lose right now.