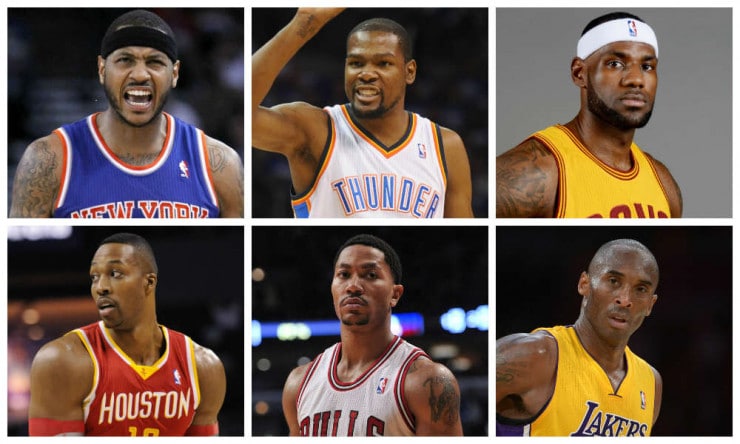 With NBA training camps set to open, it’s time to start our vigorous preparation for the 2014-15 fantasy hoops season.

Thus, listed below is a preliminary preview of the official Top-150 overall rankings we’ll release next month.

As always, it is important to issue this disclaimer: These rankings are based on nine-category fantasy scoring leagues that account for points, assists, rebounds, steals, blocks, three-pointers made, turnovers, field goal percentage and free throw percentage. The rankings for five-category leagues would look far different, especially for particular players with major flaws in categories such as free-throw shooting or turnovers.

Beneath the rankings, I have listed a handful of players that just missed the cut. I have also included a few random stats and other interesting tidbits to help explain the thinking behind a handful of these selections.

* There is simply no longer any debate about who to take with the No. 1 overall pick. We know Kevin Durant is the greatest scorer on the planet, and he once again led the NBA in scoring average last season, pouring in 32 points per night. That was highest points per game average registered over the course of a full NBA season since Kobe Bryant averaged 35.4 ppg during the 2005-06 season. From January 5 through April 6, Durant went on a historical scoring binge. He surpassed Michael Jordan’s modern day record by scoring 25 or more points in 41 consecutive games. It was the third longest single-season streak in NBA history, behind only Oscar Robertson and the immortal Wilt Chamberlain. However, Durant was anything but one-dimensional last season. He set a career high in assists (5.5 apg) while also grabbing 7.4 rebounds a night. In fact, Durant became just the fourth player in NBA history to average at least 32 points, seven rebounds and five assists per game. The other three are Michael Jordan, Wilt Chamberlain and Elgin Baylor. Durant also remained incredibly efficient. He joined Jordan as the only player since 1985 to average 32 points per game while also shooting above 50 percent from the floor. Lastly, he was remarkably durable, playing in a total of 81 of 82 regular season games.

* While he didn’t quite match Durant’s all-around production this season, LeBron James had another incredible season. He’s been so good for so long that we take his greatness for granted; but make no mistake, James is as dominant as ever. He continued to stuff the stat sheet on a regular basis, averaging 27.1 ppg, 6.9 rpg and 6.4 apg. He is the only player to average at least 26/6/6 since Michael Jordan in 1991-92 and, amazingly, James has averaged at least 26 ppg, six rpg and six apg in 10 straight seasons. The move from Cleveland (and playing alongside elite scorers like Kyrie Irving and Kevin Love) will be an adjustment, but I have no doubt LeBron will find ways to contribute incredible numbers on a nightly basis.

* Anthony Davis’ stock is so hot right now, many pundits have advocated taking Davis ahead of LeBron. While I wouldn’t gamble to that extent (primarily because of Davis’ inability to avoid injury during his first two seasons), the hype is most certainly justified. Davis led the NBA in blocks last season, swatting 2.8 shots per game. He also led the New Orleans Pelicans in steals, averaging 1.3 steals per contest. In the process, Davis became the first NBA player since 2008 to average at least 2.8 blocks and 1.3 steals per game in the same season. Davis also did damage on the boards, grabbing 10 rebounds a night. He joined Shaquille O’Neal as just the second player in NBA history to averaged 20 points, 10 boards and 2.5 blocks during their age-20 season. But Davis’ domination was not limited to the defensive end. He has already established himself as a remarkably effective and efficient scorer. Davis shot 51.9 percent from the floor during the 2012-13 campaign and knocked down over 79 percent of his free throw attempts, a notably high number for a center. In fact, Davis was only player in the league last season to shoot over 51 percent and 79 percent from the field and free-throw line, respectively.

* John Wall finished his fourth season in the NBA (266 games) with career averages of 17.7 ppg, 8.3 apg and 4.3 rpg. He joined Oscar Robertson, Magic Johnson and Chris Paul as the only players to post these career averages through the first 266 games of their career.

* The last time Chris Bosh played a full NBA season in which he did not have to share the court with LeBron James as a teammate, Bosh averaged 24 ppg and 10.8 rpg. Bosh has always been remarkably efficient, and now with LeBron back in Cleveland and Wade inevitably nursing injuries, Bosh will see his usage rate skyrocket.

* Some worrisome news out of Atlanta for Al Horford. He has not been cleared for contact yet, and the team will be cautious with him as training camp begins…

* Some mildly depressing news for the 76ers’ Michael Carter-Williams as well. MCW has not yet been cleared for five-on-five contact.

* Jose Calderon is one of just two active NBA players shooting over 47 percent from the floor, 87 percent from the charity stripe and 41 percent from behind the three-point arc for their career. Steve Nash is the only member of this exclusive club. Furthermore, the Triangle Offense is perfectly suited for Calderon, who should put up great numbers in New York.