Connect with us
Home » news » Preview 5 Arkansas Vs 12 Wofford 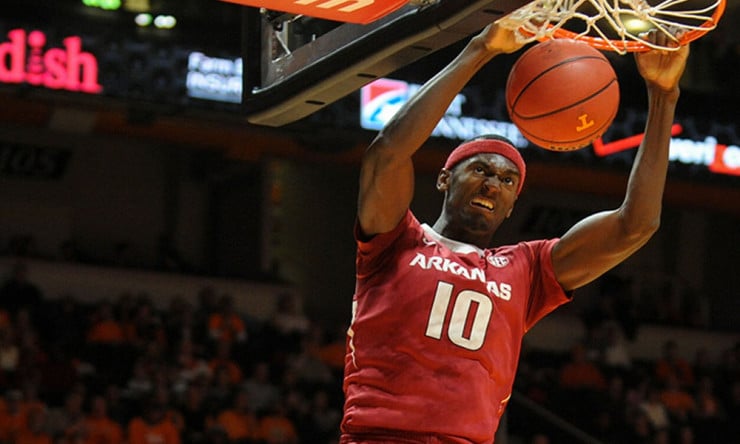 Back in the tournament for the first time since 2008 are the Razorbacks thanks to their second place finish in the SEC. They boast a top 10 offense that averages 79 points a night, led by sophomore big man Bobby Portis’ 17.8. The future pro also leads the team with 8.7 rebounds and 1.5 blocks a night. The tournament could serve as a nice showcase for the national public to see just how good he is. The Razorbacks have 10 guys averaging 10 minutes or more, with seven of them averaging at least five points. Their high-octane offense is built on ball movement; they average 16.8 assists a night, the fifth most in the country. The 70 points they allowed a night against the 64th most difficult schedule in the country is among the highest in the tournament, but they are one of the best teams in the field in blocking shots and getting steals, ranking in the top 40 nationally in both categories. The Razorbacks went 3-3 against the RPI top 50, with their best wins coming at SMU and at home against Dayton. In their three losses, they gave up 86 points. They have the potential to be a tough out, as long as they bring their best defensive effort.

With four Southern Conference championships in six years, the Terriers are no strangers to success on the hardwood and Mike Young’s team is looking for more than just an invite to the NCAA tournament. Entering the dance with a record of 25-6, Wofford has been rock solid on the defensive end, giving up just 59.9 PPG (27th in the country). They have used a stifling half-court defense to yield just 0.832 points per possession and rank 44th in the country in pick-and-roll defense guarding the ball handler, as well as 34th in the country guarding the roll man. In today’s game dominated by the pick and roll, having great coverage can carry a team, especially in late shot -clock situations. On the other side of the ball, they are solid but not spectacular, scoring just 66.9 PPG, which translates to 0.92 PPP. They are excellent on spot up opportunities (1.05 PPP), but near the bottom of the nation when it comes to pick and roll offense (262nd). Senior leader Karl Cochran (15.1 PPG, 5.9 RPG, 2.8 APG) and Spencer Collins (11.3 PPG, 2.5 RPG) are the lone players averaging double figures and both of them can really shoot the rock. Cochran will put it up early and often and “hand down, man down” truly applies in this instance (88 threes made this year). If Wofford is going to have a shot at advancing, it will hinge on getting stops and Cochran will have to do his best Steph Curry impersonation to lead the way. We’ll see what the Terriers can muster.