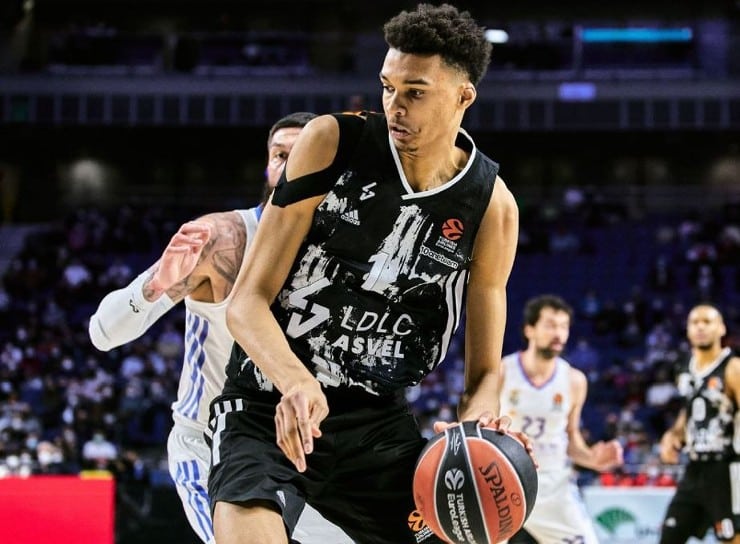 French prospect Victor Wembanyama plans on becoming one of the greatest basketball players of all time. He’s 7’3″ and has a 7.5-foot wingspan. The 18-year-old forward/center is also shooting for originality.

“I’m gonna tell you something that’s been going on in my life, like for my whole life, since I’ve been a kid, even before I played basketball,” Wembanyama told ESPN.

According to most NBA betting sites, the Golden State Warriors and Boston Celtics have the highest odds of winning the championship in 2023. Compare the teams’ title odds from each sportsbook for the 2022-23 season.

Have you seen a basketball player like this? No, you haven’t.

“And this is really how it worked in my life,” continued Victor Wembanyama. “I don’t know where it comes from. I think I was born with it. I’ve always been trying to be original. Unique, that’s the word. My goal is to be like something you’ve never seen.”

So, the Frenchman wants to leave behind a long-lasting legacy. His professional career started in 2019, when he made his debut with Nanterre 92, a basketball club based in Nanterre, France.

On October 29, 2019, Wembanyama made his debut with Nanterre 92 against Brescia in the EuroCup. At 15 years, nine months, and 25 days old, the forward/center became the second-youngest player behind Stefan Petković to ever appear in a game in the EuroCup.

Victor Wembanyama: “My goal is to be like something you’ve never seen”

Of course, he won LNB Pro A Best Young Player as well.

Then, in June 2021, the Frenchman signed a three-year contract with ASVEL of the Pro A and EuroLeague. Through 13 appearances in the EuroLeague during the 2021-22 season, Wembanyama averaged 6.5 points, 3.8 rebounds, and 1.9 blocks per contest.

On April 3, in the ASVEL’s 85-65 win against Le Portel, the forward/center scored a career-high 25 points.

While in the LNB Pro A, Victor Wembanyama averaged career highs of 9.4 points and 5.1 rebounds per game in 16 appearances. Plus, he shot 47.3% from the floor.

He went on to win his second LNB Pro A Best Young Player award.

Furthermore, ASVEL finished as the top seed of the league’s 100th season. They also won their 21st title in club history. However, at the end of the season, Wembanyama opted out of his contract.

Wembanyama wants to be the No. 1 overall pick in the 2023 NBA Draft

In another interview, one unknown NBA executive said, “Everybody is so ready to tank.” The unnamed source made that comment as a joke, but some teams might just do that.

Back in June, Victor Wembanyama signed a two-year deal with the Metropolitans 92 of the Pro A. Last month, he scored 34 points versus Darussafaka, a professional basketball club based in Istanbul, Turkey.

Two days later, he scored another 34 points against Hapoel Holon. In his first Betclic Elite performance of the 2022-23 season, the forward/center recorded 23 points, 10 rebounds, and 3 blocks.

Metropolitans 92 coach Vincent Collet has high hopes for Wembanyama. He’s coaching the Frenchman and training with him every week to prepare him for the 2023 NBA Draft. The prospect turns 19 in January.

“Many people around him are always telling him, ‘It’s great, what you do is fantastic.,” explained Collet. “And me, I am the coach, so I am the one that most sometimes say, ‘This is not good, this you could do better.’ And for me, this is the most important, to teach him.”

Victor Wembanyama wants to be the top pick in next year’s draft. That’s one of his goals. “At the end of the day, regardless of what position you get picked in the draft, I think the most important is to have the best career afterwards,” Wembanyama said.