Victorious as usual, after giving the Brooklyn Nets a 30-point beating, Dwyane Wade checked his phone as he got dressed.

Wade then turned to Jimmy Butler, who had just finished addressing the media, and asked a question.

Butler looked at his bag and, with a smile, nodded.

Moments later, Rajon Rondo walked over to Butler and playfully chastised him for turning down the volume on his iPhone. Butler’s phone was connected to a bluetooth speaker blasting music in the Bulls’ spirited locker room. When one Drake song in particular came on, Rondo asked Butler for his phone so he could play the song again.

With a light chuckle, Butler obliged.

I’ve spent my fair share of time in NBA locker rooms over the years and have come to learn that what transpires in there, in front of the media, is a usually indicative of what transpires behind closed doors. NBA locker rooms are places where egos often clash. Some of your favorite NBA stars are more concerned with continuing to assert themselves as their team’s alpha-male than they are with winning basketball games, while others are more concerned with their playing time and their next contract than their next game.

If and when there is disharmony in an NBA locker room, the best thing to do is observe. Vibrations and energy don’t lie. Fortunately, in Chicago, none of those problems exist. Dwyane Wade made sure of it.

Many moons ago, with Wade still a rising star in Miami, Shaquille O’Neal hand-picked Wade as his desired running mate because O’Neal saw Wade’s immense potential after Wade’s impressive performance in the 2003-04 playoffs. Despite his three championship rings, upon arriving in Miami, O’Neal made it clear to everyone around him that in order for the HEAT to win, Wade would need to become the dominant force that his potential suggested he could. Privately, O’Neal shared those sentiments with the young guard and assured Wade that he sincerely wanted him to be the team’s alpha. For Wade, it made a tremendous difference.

That’s why, seven years later—after the HEAT had fallen short against the Dallas Mavericks—it was easy for Wade to step aside in a similar manner for LeBron James. And that’s why, after returning home to Chicago, it was easy for Wade to declare the team to be Jimmy Butler’s. No stranger to sacrifice, Wade understands what it takes to build a winner and a harmonious locker room in the NBA.

Over the years, I have spent a lot of time around Wade. We have had conversations about his health, his progression as a superstar and the growth of Erik Spoelstra among other subjects. Incredibly humble and insightful, Wade has long dedicated himself to being a player who chased the collective accolades over the individual.

That’s why, of all players in the league, he could offer a unique perspective on what Kevin Durant and the Golden State Warriors are going through. Wade has been there and done that.

What made Durant’s decision to defect to Oakland “surprising,” as Wade put it, was probably the fact that, unlike LeBron’s Cavaliers, Durant’s Thunder had the defending champions on the ropes in the Conference Finals. They seemed so close.

Now, though, with the assembling of the NBA’s newest “super team,” the expectation is not only for the Warriors to win, but for them to win right now.

Rarely does it happen like that, though. Wade knows that well.

“It takes time,” he said with a chuckle. Recalling his experience with the HEAT, Wade knows that winning was about more than names on paper. “We had great players, but we had a lot of guys who already was used to something a certain way and it just took a little time.” 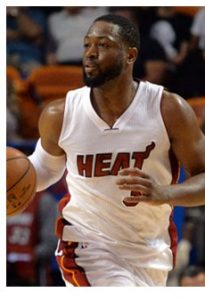 The HEAT would begin their first season together by putting together a win-loss record of just 9-8 over their first 17 games. Many wondered whether Wade and James joining forces was a mistake. Others said that Coach Spoelstra was in over his head. Then, seemingly out of nowhere, the HEAT responded by winning 21 of their next 22 games.

“Everybody wanted to beat us, so everybody was playing their tail off against us,” Wade recalled. “It took time for us to get to the game that we wanted to get to.”

Having begun their season with two early humbling losses to the San Antonio Spurs and the Los Angeles Lakers, the Warriors are getting a first-hand feeling of what it’s like to be a walking target. Sure, as the defending champions last season, they had their fair share of challengers, but the level of hate and scrutiny they are under this season, for them, is new.

“I think them guys understand what it takes,” Wade said of the sacrifices needed to win under such circumstances. “I think the biggest thing is, what I say is just enjoy it. One thing we did wrong our first year was we played into the villain role because people was not liking that we was together and we tried to play into that role. That’s not why we started playing basketball – we started playing basketball because we enjoyed it and we loved it.”

Over the years, LeBron James admitted the same. The HEAT were a lightning rod for criticism. People actively rooted for them to fail because the masses were sold the idea that what they had created in Miami was bad for basketball. There are some facts that would indicate precisely the opposite. But, Wade cautions, if you feed into the negativity, it could make an already challenging endeavor all the more emotionally taxing.

“When you play that way, you win that way,” Wade said of playing with joy. “That’s the one thing, don’t play into the role of what people expect of you.

“You have the ability to do whatever you want in life and you made a decision, so live with your decision,” he said of Durant, specifically. “Enjoy your decision and just enjoy playing basketball.”

Coming off of a record-breaking 73-win season, the Warriors effectively replaced Harrison Barnes with Kevin Durant. If the “trade” of the two were one-on-one, that would be one thing. But the Warriors had to separate with other key members of their rotation in order to free the necessary cap space to sign Durant.

Whether the Warriors can live up to the mighty expectations will be determined by how they respond to the challenges they face and how Durant, Stephen Curry, Klay Thompson and Draymond Green respond to the new pecking order that the team will inevitably have to determine.

Their success will also be determined by how well Curry can play the part of Wade, making Durant’s transition to the team harmonious and seamless.

Inevitably, in the NBA, history repeats itself. Now, an older sage, Wade has the perspective to provide valuable insight.

Indeed, in a world where athletes are expected to conform, independent thought often comes with a cost.

Durant has already lost a lot, and his gains can only be evened out by winning big.

Unlike the Warriors of the past, the San Antonio Spurs or the Cleveland Cavaliers, the Warriors find themselves mimicking the model of Dwyane Wade’s HEAT. Whether they have the same success will be determined by how well they sacrifice.

Like the rest of us, Dwyane Wade will be watching closely.

NBA AM: Evaluating the Hot and Cold Starts