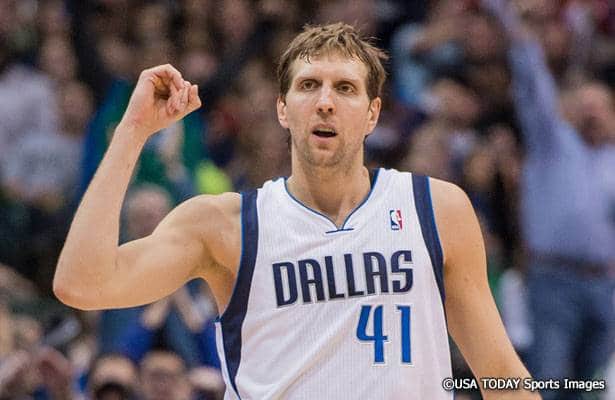 Fifteen years ago this week, rookies from the 1998 NBA draft class made their regular season debuts following the end of the lockout. Selected on June 24, they waited over seven months before they stepped on to the court as pro athletes for the first time.

All these years later, the majority of the players from that class are out of the league. Some are still on rosters, playing decreased minutes in veteran leadership roles. Then there are a select few who are contributing at a high level, even earning All-Star selections and proving they have more years left to go.

Take a look at the top 10 picks from the 1998 NBA Draft, how they performed in their debuts and where they are in their basketball careers today.

As a certain two-point scorer showed, the long-term potential of a player can’t always be judged based on his first impression.

Olowokandi played 22 minutes off the bench, scoring 14 points and grabbing six rebounds in the Los Angeles Clippers’ 101-92 loss to the Phoenix Suns. The big man spent nine seasons in the NBA, with a career average of 8.3 points, 6.8 rebounds and 1.4 blocks.

Bibby started for the Vancouver Grizzlies in their 109-87 loss to his future team, the Sacramento Kings. He came one assist shy of a double-double with 11 points and nine dimes in 36 minutes. He finished his 14-year career with an average of 14.7 points, 5.5 assists and 3.1 rebounds.

As a starter for the Denver Nuggets, LaFrentz scored 11 points and pulled down seven rebounds in 25 minutes in a 110-92 loss to the Minnesota Timberwolves. He played 10 seasons in the NBA, averaging close to his opening performance, 10.1 points and 6.1 rebounds.

Jamison scored just single point to go with one steal in the Golden State Warriors’ 86-84 loss to the Houston Rockets. In spite of that, he became a two-time All-Star and is currently a member of the Los Angeles Clippers. He is averaging 3.6 points and 2.4 rebounds this season, but has career numbers of 18.5 points and 7.5 boards.

The eventual Rookie of the Year Carter came out on the winning end in his debut, a Toronto Raptors 103-92 victory over the Boston Celtics. He scored 16 points in 31 minutes as a starter and increased those stats to 20.4 points per game for his career. Carter, an eight-time All-Star, is averaging 11.4 points, 3.3 rebounds and 2.9 assists this season with the Dallas Mavericks.

Traylor made the most of his eight minutes in his debut, posting four points, four rebounds, one assist, one steal and one block in the Milwaukee Bucks’ 113-107 win against the Charlotte Hornets. He played seven seasons in the NBA, averaging 4.8 points and 3.7 rebounds. Traylor passed away on May 11, 2011.

Williams held nothing back in his debut, leading all scorers with 21 points (along with five steals, four rebounds and three assists) in 36 minutes during the Sacramento Kings’ 101-83 defeat to the San Antonio Spurs. He went on to win a championship with the Miami HEAT and played until 2011, averaging 10.5 points and 5.9 assists in his career.

Like Bibby, Hughes came close to a double-double in his debut. He recorded 11 points and nine rebounds in 16 minutes off the bench in the Philadelphia 76ers’ 78-66 win over the Charlotte Hornets. He finished his career in 2012 with an average of 14.1 points, 4.2 rebounds and 3.1 assists.

Who knew the rookie who scored two points in his NBA debut would become a champion, league MVP, NBA Finals MVP and 12-time All-Star still being selected in his 16th season? Nowitzki went 0-for-5 from the field with a pair of free throws in the Dallas Mavericks’ 92-86 loss to the Seattle SuperSonics. He continues to go strong, averaging 22.0 points, 6.2 rebounds and 2.9 assists per game this season for the Mavs (close to his career average 22.6 points, 8.1 rebounds and 2.6 assists).

Pierce thought he should have been drafted higher than the 10th pick. He let his talent be known in his debut, putting up 19 points, nine rebounds, five assists, four blocks, and two steals in 39 minutes as a starter in the Boston Celtics’ 103-92 loss to the Toronto Raptors (and fifth pick Carter). Like Nowitzki, Pierce went on to win a championship, earn NBA Finals MVP honors and 10 All-Star nods. He is averaging 13.5 points, 4.7 rebounds and 3.0 assists in his first season out of a Celtics uniform as a member of the Brooklyn Nets. His career stats include 21.5 points, 6.0 boards and 3.9 dimes per game.