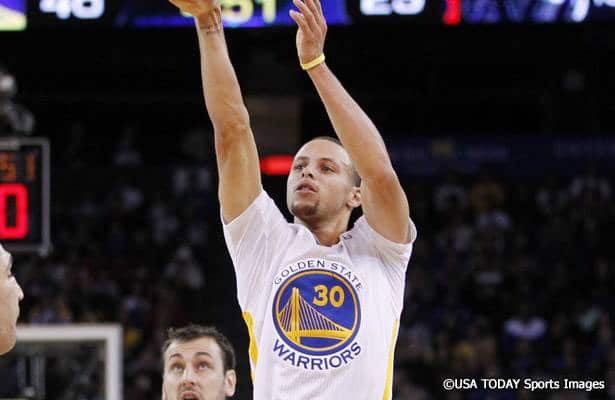 The NBA announced the starting lineups for the Eastern and Western Conference All-Stars on Thursday.

The pool for the three-point shootout has yet to be named but the early list, subject to change, includes Stephen Curry (Golden State Warriors), Kevin Love (Minnesota Timberwolves) and Marco Belinelli (San Antonio Spurs) representing the West.

Belinelli is leading the league with a three-point shooting percentage of 49.3 percent.

Kyrie Irving (Cleveland Cavaliers) is expected to have a chance to defend his title.  Kyle Korver (Atlanta Hawks) is also believed to be getting an invite.

The sixth participant isn’t clear just yet, but the final shooter would come from an Eastern Conference franchise.

Anthony Tolliver (Charlotte Bobcats) is one of the league leaders at 44.5 percent (sixth overall).  Mirza Teletovic (Brooklyn Nets) is eighth at 43.6 percent.

Orlando’s Arron Afflalo is tenth overall at 42.7 percent while Washington’s Bradley Beal is 13th at 42.3 percent (tied with P.J. Tucker over the Phoenix Suns).

The Memphis Grizzlies saw two of their traded player exceptions (TPE) expire on Wednesday, losing both a $2.1 million exception for Wayne Ellington and $762k for Josh Selby.

The Grizzlies will also lose the remainder of their Rudy Gay TPE ($2.3 million) and their Hamed Haddadi TPE ($1.3) if they don’t use them by January 30.

No team in the league collects trade exceptions like the Grizzlies.  The team will still have three remaining through the seasons — Donte Greene ($1 million), Tony Wroten Jr. ($1.2 million) and Jerry Bayless ($3.1 million).

Basketball Insiders has a list of the 30 current traded player exceptions.  The Boston Celtics currently have the largest TWP at $10.3 million for Paul Pierce, expiring in July.

The Orlando Magic’s $1.5 million TPE for Gustavo Ayon is the only other exception to expire (2/11/14) before the NBA’s February 20 trade deadline.

The Western Conference has dominated the NBA most of the season but the East is starting to improve, marginally.

The Indiana Pacers (34-9) and Miami HEAT (31-12) are among the two best teams in the league but for a long stretch this season, they had no other eastern competition above .500.

Now the Atlanta Hawks, who are playing without the injured Al Horford (pectoral tear) are a solid 23-20.

The Toronto Raptors (22-21) and Chicago Bulls (22-11) have also climbed into winning territory.  The Raptors dealt Rudy Gay to the Sacramento Kings but instead of heading to the lottery, Toronto found their footing.

The Bulls had high hopes this season but after losing Derrick Rose to a knee injury, expectations have been tempered.  Luol Deng was dealt to the Cleveland Cavaliers for financial reasons but the Bulls are still managing to win games.

The eighth spot in the East, currently occupied by the Charlotte Bobcats (19-27), may not be filled by a winning team at season’s end — but overall the conference has made some progress.