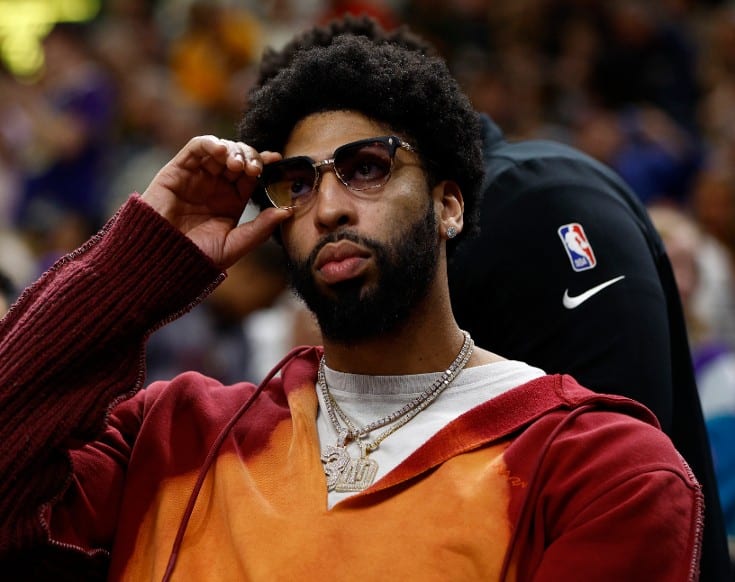 Eight-time All-Star Anthony Davis earned his first NBA championship in his first season with the Lakers. However, ever since the 2019-20 season, it has been anything but smooth sailing for the organization. Last week, Davis told reporters that his team would’ve defeated the Suns in the 2021 NBA Finals, if not for his groin injury in Game 4.

With the regular season soon coming to a close, the Lakers rank 11th overall in the Western Conference standings. They trail the 10th-seeded Spurs by two games, while remaining 2.5 games ahead of the Kings. Furthermore, Anthony Davis informed ESPN reporter Dave McMenamin, “I think the biggest thing that I think about personally is what we could have been had we stayed healthy all year.”

Anthony Davis: "What could we have been if I was healthy all year, LeBron, Kendrick Nunn? You think about those things. When we put this team together, we looked really good on paper, but we haven't had a chance to reach that potential with guys being in and out of the lineup." pic.twitter.com/4yuS4I7AJW

Davis missed 39 of the Lakers’ 78 games this season due to injuries. “Guys feel like, ‘Ok, what could we have been if I was healthy all year, [LeBron James] was healthy, [Kendrick Nunn] was healthy.’ You think about those things. We put this team together and it looked good on paper, but we haven’t had a chance to reach that potential with guys in and out of the lineup.”

Los Angeles has had its fair share of misfortune this season. In November, LeBron James received a one-game suspension for a flagrant foul on Pistons’ center Isaiah Stewart. Last night, Anthony Davis re-aggravated an injury in his foot in the first quarter against the Nuggets. Of course, James sat out of Los Angeles’ 129-118 home loss to Denver. The little things add up over time.

Anyway, Davis closed out his statement saying, “So the most frustrating part of this season is not being sure of what we could have been.” This is all so true. For some perspective, oddsmakers gave the Lakers and Nets the best odds to win their respected conferences. Sportsbooks had Los Angeles’ win total set at 52.5. Now look at them.

Fans can make excuses for Anthony Davis, considering he does have a history of dealing with nasty injuries. In a total of 39 games played, the 10-year veteran averaged 23.2 points, 9.8 rebounds and 3.1 assists per game. But what about Russell Westbrook?

Well, the triple-double king has appeared in all 77 games. Westbrook averaged 18.4 points, 7.5 rebounds and 7.1 assists per game. Though, when Davis and James shared the court, their opponents still outscored them.

Aside from James, both Davis and Westbrook underperformed this season, especially scoring-wise. The team chemistry just isn’t there. A lack of discipline and nonexistent team chemistry falls back on head coach Frank Vogel, too.