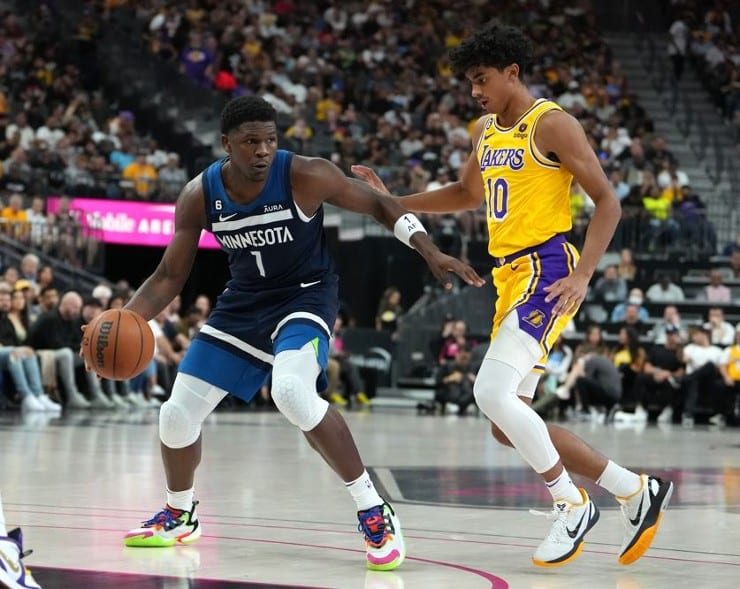 Minnesota Timberwolves guard Anthony Edwards feels the chemistry between him and new teammate Rudy Gobert is growing during every practice.

A few NBA betting sites show the Timberwolves with top-15 odds to win the championship in 2023. Multiple sportsbooks are also expecting the Western Conference contender to return to the playoffs.

Anthony Edwards on growing chemistry with Rudy Gobert:
"We just been working on my lob throws. I've never threw lobs before, so I've been working on em… It's very effective. Him rollin, KAT poppin, teams don't know how to guard us because he creates a great highway to the rim."

“Him rollin, KAT [Karl-Anthony Towns] poppin, teams don’t know how to guard us because he creates a great highway to the rim,” continued Anthony Edwards.

On Tuesday, in the Timberwolves’ 121-111 win over the Miami Heat in their preseason opener, Anthony Edwards finished his performance with 24 points, 3 rebounds, 3 assists, and 1 steal in 23 minutes of action.

While Gobert sat out the first exhibition game at FTX Arena, the center played 17 minutes against the Los Angeles Lakers and led his team in rebounds on Thursday night.

In Minnesota’s 114-99 win versus the Lakers at T-Mobile Arena in Las Vegas, Gobert ended his outing with 5 points, 12 boards, 3 assists, and 2 steals in 17 minutes on the court.

As for Edwards, the guard had 13 points, 6 rebounds, 2 assists, 1 steal, and 1 block in 23 minutes played. With him, Gobert, and Towns together on the Timberwolves, the team is an improved playoff contender on paper.

Furthermore, Anthony Edwards also had the chance to meet up with former teammate Patrick Beverley.

Then back in August, the Jazz traded Beverley to the Lakers for Talen Horton-Tucker and Stanley Johnson. Plus, Utah received a trade exception.

Had Timberwolves G.M. Tim Connelly kept Beverley, the team would have been better off. However, Minnesota has enough talent and playmakers as it is. Anthony Edwards, Rudy Gobert, and Karl-Anthony Towns now represent the team’s new big three.