Connect with us
Home » news » Basketball Insiders Week In Review 110 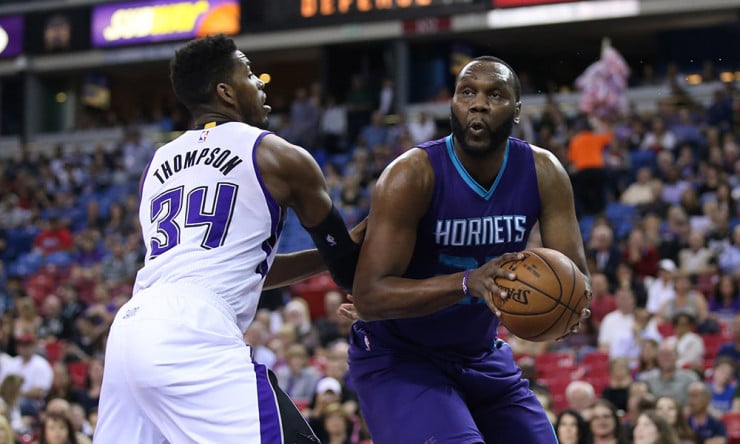 Should the Hornets Re-Sign Al Jefferson?

With the expected cap spikes over the coming years, for today’s young superstar, a deal such as the five-year, $145 million extension that Anthony Davis signed this past summer will become more commonplace and the scale of salaries that we have become accustomed to over the course of the 2005 and 2011 collective bargaining agreements will soon become defunct.

Beginning tomorrow, teams may begin signing players to 10-day contracts. These sort of contracts are most commonly used as a tryout period for respective players. Most players that sign a 10-day contract originate from the NBA’s Development League.

Last season, we saw a record number of call-ups from the D-League, as 47 players received an all-time high 63 call-ups. Players like Hassan Whiteside, Tim Frazier, Tyler Johnson, Seth Curry, Langston Galloway and Robert Covington were some of the players called-up to the NBA who still remain on an NBA roster.

Indiana Pacers swingman Chase Budinger has made a career for himself scoring the basketball, as that picture-perfect shooting form always has been something of a calling card for him. But what often gets overlooked is the fact that he’s one of the league’s most under-appreciated leapers, a skill he picked up as a student athlete dividing his time between basketball and volleyball.

In fact, he was so good at both coming out of high school that universities were willing to offer him full-ride scholarship opportunities to continue playing both sports.

“There were volleyball scholarships,” Budinger told Basketball Insiders. “A lot of the colleges recruiting me for volleyball also wanted me to play basketball, so there were schools like UCLA, USC that were pushing me to play both. They’d send both coaches to recruit me and would say things like, ‘Hey, if you come to UCLA you could play both sports,’ things like that, but I just decided I wanted to play only basketball.”

It didn’t take long for new head coach Scott Skiles to make his presence felt around the Orlando Magic organization.

In his first few months with the franchise, he has made some controversial decisions such as moving Victor Oladipo to the second unit, benching Nikola Vucevic at times and calling out players after disappointing games, but there’s no question that his way of doing things has worked thus far.

Pistons Not Looking To Move Jennings

Detroit Pistons guard Brandon Jennings played 18 minutes last night in the Pistons 115-89 win over the Orlando Magic. While the sample size for Jennings was small in terms of minutes, the production on the floor was solid with Jennings posting 17 points on 5-for-9 shooting and 3-for-4 from the three-point line. Jennings was agile and aggressive and looked every part of the NBA starter he was before his Achilles tear this time last year.

Jennings’ name has been floated around in NBA trade rumors mostly because the Pistons have found gold in guard Reggie Jackson, who they gave an enormous contract to this summer. As a result, the team does not have a very big role left for Jennings. Factor in Jennings’ pending unrestricted free agency and there has been a sense that Jennings could be the best point guard obtainable as the February 18 trade deadline approaches.

As a burgeoning NBA star, C.J. McCollum is coming to represent many things. He’s an example of how it can be beneficial for young talents to play behind veterans early in their respective NBA careers, and the ways it can help them down the road. He’s among the many contemporary players showcasing how vital elite shooting ability has become for guards in the league today. He’s representative of the way opportunity and hard work can combine to become greater than the sum of their parts.

What many don’t realize, though, is that McCollum is anything but an ordinary NBA success story. Many foresaw his ascent this season to some degree. As a 15 minute a night player or less his first two seasons who nonetheless showed flashes of starter-level talent, McCollum was clearly slated to take on a bigger role as guys like Wesley Matthews and Nicolas Batum departed Portland over the offseason.

Preseason theories that look good on paper before the start of training camp are typically altered throughout the course of every NBA season. Every year there will be individuals expected to play key roles in their team’s nightly rotation who instead find themselves in lesser roles and, in some cases, glued to the bench. The reasons are plentiful: Age, injury, poor conditioning, newly implemented offensive and defensive schemes or a freshly acquired talent all present challenges to a player’s playing time.

As we near the season’s halfway point, let’s take a look around the league at some guys who were expected to play bigger roles but have found themselves battling for minutes every night.

Dwyane Wade Turning Back the Clock this Season

Earlier this week the NBA released its most recent All-Star voting numbers. Coming in at the top was Kobe Bryant who, as of Thursday, registered 1,262,118 votes. Kobe is in the final season of his historic 20-year career and so it comes as no surprise that fans are flooding the voting channels with his name despite the fact that, at age 37, he is putting together arguably the worst season in his illustrious career.

While Kobe is a lock to take one of the starting guard slots for the Western Conference, Dwyane Wade of the Miami HEAT currently holds a strong lead in the voting for one of the guard slots in the Eastern Conference. The difference is that Wade, who will turn 34 on January 17, isn’t earning votes because this is final season in the NBA. Rather, Wade is earning his votes on the back of his resurgent 2015-16 season, where he has turned back the clock and is showing flashes of his younger self.

Can Toronto’s Backcourt Push Raptors to a Deep Playoff Run?

The Toronto Raptors face an important question this season: Can the evolution of DeMar DeRozan and “Skinny Kyle Lowry” launch the team to a deep postseason run?

The lone NBA team located outside of the United States has made the playoffs out East in consecutive years behind 48 and 49-win seasons, led by their backcourt duo of DeRozan and Lowry. However, Toronto has been kicked out of the postseason in the first round both years.