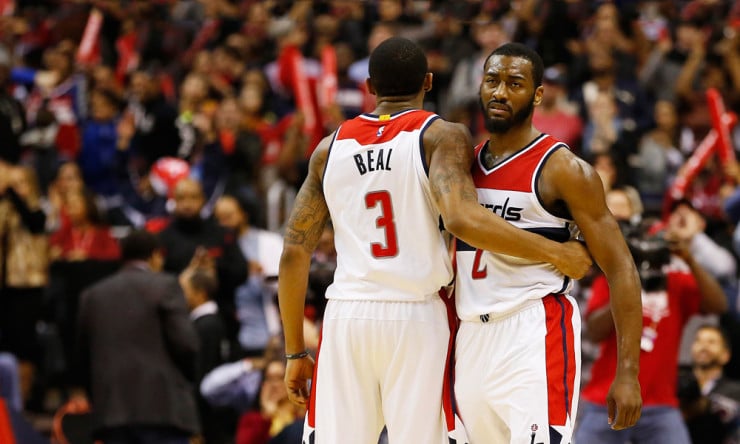 Wizards Turning It Around

There are disappointments, and then there are the 2015-16 Washington Wizards.

“Those things happen, we’ve been there before the last couple years,” head coach Randy Wittman said of the fact that, after a slow start, his team sits at 14-14 and with the 11th seed in the Eastern Conference.

“It’s not gonna be easy for 82 games and you’re gonna go through difficult times.”

Least-Deserving NBA All-Stars of All Time

Not only is Kobe Bryant going to make the All-Star team despite averaging 17.2 PPG (his lowest output since 1998) and shooting .409 from the field (the second-lowest of his career), he’s also going to lead all players in votes if things continue along the way they have in the early stages of the voting process.

After the first returns for All-Star voting, released the day after Christmas, Bryant was leading all players with a whopping 719,235 votes, over 200,000 more than reigning league MVP Stephen Curry and more than twice the votes for Cleveland’s LeBron James, the third-highest vote-getter with 357,937 so far.

While the fans can occasionally be pretty ridiculous with the players they choose to vote into the All-Star Game, the Kobe Bryant thing is understandable considering everybody knows this is his swan song and they want to get him into one more midseason exhibition before he hits that old dusty trail. Magic Johnson was written in as an All-Star in 1992 and that proved to be one of the more entertaining All-Star Games of its era, so Kobe as an All-Star will be fine. It really isn’t all that surprising.

January Could Be Make or Break for HEAT

By Christmas Day, we usually get a good feel for how a team’s season will go. Players have had roughly two months since the start of the season to get their legs back and adjust to playing NBA basketball on a regular basis.

The HEAT have benefited thus far with a very team-friendly schedule. They have already played 29 games, with 19 of those coming at American Airlines Arena in Miami. They will play their league-leading 20th home game tonight against the Brooklyn Nets.

Is It Time To Fire The Coach?

One of the things we try to do in this space is clarify processes in the NBA. While there will always be misconceptions, sometimes the real process of how things get done is lost in incorrect beliefs about the process.

One of the biggest examples of this is how fans perceive the power of NBA general managers. While there are a small handful of NBA executives that have autonomy, the large majority answer to someone above them either in a team president role, a CEO role or directly to an owner. Very few are empowered to just make deals on their own and most are the leader of a collaborative process that involves a lot of voices, especially when those decisions involve money or significant roster changes.

This is important to note, because there are a few NBA head coaches that are under fire from their fan base under the misconception that they alone control the roster, which (like the general managers they answer to) is far from the case.

What’s Next for the Suns?

The Phoenix Suns (12-21) are off to a rough start to the season, but on the surface the franchise sits just three games behind the Utah Jazz for the eighth and final playoff spot in the Western Conference.

However, the Suns have lost five consecutive contests and eight of their past 10 games, which is a much more accurate indicator of the team’s current trajectory.

The team has been engulfed with controversy surrounding the long-term status of Markieff Morris since the summer after Phoenix shipped his twin brother, Marcus, to Detroit. Morris began the season seemingly an integral part of the Suns’ offense but has since been injured, fallen out of the rotation when healthy and recently was suspended two games, without pay, for throwing a towel at head coach Jeff Hornacek during a loss.

Kobe Bryant played his final game in Boston Wednesday night, capping off a chapter in his career deeply tied to the historic rivalry between the Boston Celtics and Los Angeles Lakers.

Prior to the game, Bryant spoke at length in a press conference including his memories competing against the team that set out to “Beat L-A.”

Increased mathematical proficiency in basketball has given way to a plethora of different figures and statistics attempting to complement and often define our understanding of the game. All-in-one metrics like PER were a big part of this initial push, with their ability to combine many smaller statistics into one larger one that can broadly define a player or team’s value. Plus-minus statistics are more of a recent rage in the public sphere, which are useful in a whole different context, and there’s a vast world in between: everything from broad metrics to the most detailed and minute descriptors possible.

All these different figures vary wildly in terms of value, whether descriptive or predictive in nature. It’s easy to draw conclusions from a particular stat that it’s not designed to reach, an unfortunately common part of the statistical process among more casual fans and analysts. And while it’s less common, the other end of the stick is true also; there are metrics out there that still don’t get enough recognition for the value they provide.

Time To Tear The Roster Down In Phoenix?

Not much has gone right for the Phoenix Suns this season. After a disappointing season opener against the Dallas Mavericks, the Suns starting stringing together some wins and looked like a solid playoff-caliber team led by point guards Eric Bledsoe and Brandon Knight. That duo looked to be playing themselves into at least the conversation for All-Star spots.

Then the losses started coming. They blew fourth quarter lead after fourth quarter lead to sub-par or depleted teams. Home court wasn’t defended as they lost games to terrible teams in Phoenix. What seemed like a very good defensive team on paper (with Bledsoe, P.J. Tucker and offseason acquisition Tyson Chandler) has struggled mightily – currently ranking 22nd in the NBA.

The Los Angeles Clippers have failed to meet expectations so far this season. Despite putting together an impressive offseason where the team added notable players like Paul Pierce, Josh Smith, Lance Stephenson, Wesley Johnson and re-signed DeAndre Jordan, the Clippers have struggled with chemistry, rotations, health, consistency and a lack of production from its second-unit among other things.

The bright spot for the Clippers so far this season has been the play of Blake Griffin. Unfortunately, Griffin partially tore his left quadricep tendon in the Clippers’ Christmas day game against the Los Angeles Lakers, which will likely sideline him through the first few weeks of January. On the season, Griffin is averaging 23.2 points, 8.7 rebounds and five assists per game.