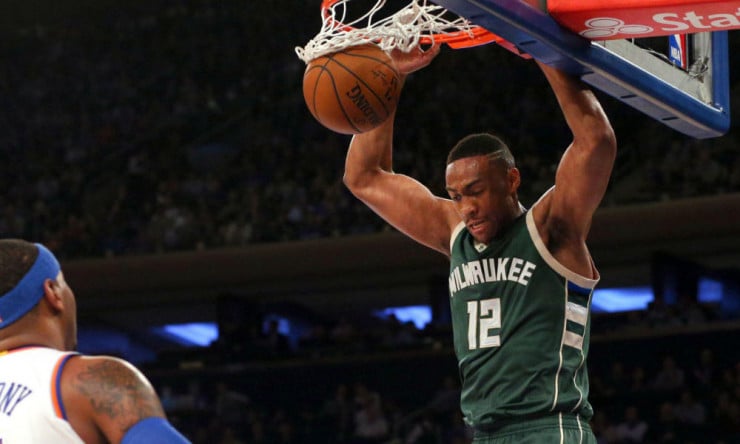 With the lights flashing and the cameras rolling, the neophyte sat and thought for a moment, but only a moment.

“Yeah, I think so,” he said when asked if there were talented players around him. “This is a really good draft. We have a lot of veteran players and a lot of young players from college, but it’s our job to get the job done.”

Poised, polished and candid, Jabari Parker looked every member of the media in the eyes and answered every question posed to him with maturity, responsibility and confidence.

Who Makes the Eastern Conference Playoffs?

In the Eastern Conference right now, as many as 11 teams have a legitimate shot at making the playoffs and it’s really been like that all year long. A quarter of the way through the season, it seemed like there was the Cleveland Cavaliers at the top of the totem pole and then 10 other teams all three or four games apart from each other right behind them. In the months since, not a lot has changed.

The Orlando Magic, the 11th-ranked team in the East thus far, are only four games back from a playoff spot but seven and a half games back from the third seed overall. It feels like a million different things could happen not only in terms of who makes the playoffs, but also when it comes to determining the postseason matchups. Finding out who will make it in and where teams will be seeded could come down to the very last game of the season.

This was supposed to be the season in which the Orlando Magic competed for the playoffs. The days of competing for a high draft pick in Orlando were supposed to be over.

The goal of making the playoffs was instilled into the players long before the season even started. By the time media day rolled around in September, playoffs was the buzzword among all of the players on the team.

“Buzzword? That is the word,” Victor Oladipo told Basketball Insiders at the time. “In order to win, we’re going to need each other. Winning takes care of everything else.

New York Knicks forward Carmelo Anthony is frustrated. After another gut wrenching loss last night, Anthony vented to the media that he was struggling to stay positive. Anthony said the losing was getting to him and that he needed to get away from the team last night to decompress. Knicks fans are starting to feel the same way.

Losing is never easy. Losing as much as the Knicks have lost over the past few years only compounds the issue. For Anthony to put a voice to the situation shouldn’t be altogether surprising; after all, he expected a lot more out of this season than he’s gotten. Some of that is his fault, most of it is on his team, but the reality of the situation is this is what Anthony signed on for.

Morris Excited for a Fresh Start

One of the most surprising moves to happen before the NBA’s trade deadline last Thursday was the Washington Wizards dealing acquiring Markieff Morris from the Phoenix Suns in exchange for Kris Humphries, DeJuan Blair and a 2016 first-round pick.

Most people around the league believed that Phoenix would dump Morris – who had three years and $24 million remaining on his contract – rather than get significant assets back for him considering his issues on and off the court over the past year. However, Phoenix received two expiring contracts and a first-round pick that is only top-nine protected, which is a great deal for the Suns.

What’s Wrong With the Atlanta Hawks?

One of the toughest things to do in professional sports is to recapture the momentum from a magical season the previous year. The 2015-16 Atlanta Hawks are the embodiment of this dilemma and they’re finding this out in a major way this season. The Hawks were the darlings of the league last year, winning 60 games and advancing to the Eastern Conference Finals before the franchise was unceremoniously swept by the Cleveland Cavaliers. But as we enter the dog days of the NBA season, the Hawks (31-27) no longer resemble a team with legitimate title aspirations. In fact, the team is trending in the opposite direction as losers of three straight since the All-Star break and six of their past 10 overall.

This season was supposed to develop much differently.

The path from the college coaching ranks to the NBA is littered with failures and retreats. For every success story, one can find multiple examples of one time up-and-comers who flamed out at the game’s highest level. Much like the thousands of players who have made the leap over the years, the thinning field of availability weeds out all but the elite’s elite – and often more quickly given the speed of NBA coaching turnaround.

So when a guy like Brad Stevens comes along, the league takes notice. Just 36 years old at the time of his hiring, Stevens spent over two full years as the league’s youngest bench boss until a couple midseason additions this year (J.B. Bickerstaff in Houston and Ty Lue in Cleveland) supplanted him – but his youth is only the tip of the iceberg.

It’s been five years and five days since the Knicks consummated the franchise-altering trade that brought Carmelo Anthony to New York. During the half-decade Anthony has spent in New York, the Knicks have tallied a regular season record of 182-216. The Knickerbockers are 7-14 in the postseason over that stretch. They have won just one playoff series. The current 2015-16 campaign will very likely be the third consecutive season in which ‘Melo’s Knicks fail to even qualify for the postseason.

It should be noted that the Knicks were actually even worse in the years preceding Anthony’s arrival (145-238 in the five seasons before ‘Melo landed in NYC), so New York’s dismal record with Carmelo is not, in and of itself, a direct indictment of the trade. Furthermore, Anthony is but one player on a 15-man roster. It would be unfair to pin the franchise’s continuing disappointments solely on his shoulders. Despite what some overly optimistic Knicks fan may have hoped, Anthony is not one of the rare NBA superstars who is capable of carrying a team by himself.

Breaking Down the Buyout Market

After trade deadline passes each season, at least a handful of teams start buyout discussions with players for various reasons. For teams, it’s an opportunity to save some money on players who are not in the team’s long-term plans. For the players, it’s an opportunity to hit the market and sign with a contender or a team that will give them a big role and a lot of playing time to showcase themselves for a new contract in the offseason.

The Field For Most Improved Player of the Year

The Most Improved Player of the Year (MIP) award tends to go to a player who came out of nowhere, a player whose production and profile amongst the league took the largest leap. It often is a player that was a lower draft pick, or someone who isn’t known to casual fans, who put in the hard work in the offseason and makes a huge impact on his team, reaching the group of players just out of the all-star conversation. Typically All-stars don’t win this award, and usually aren’t even considered. One marker of a MIP winner is someone who got a huge bump in minutes per game and made the most of it.

Last season, the Chicago Bulls’ Jimmy Butler ran away with the award and, as an exception to the general rule, also become a first-time All-Star. Other recent winners include Goran Dragic (2013-14) when he was with the Phoenix Suns, Paul George (2012-13) with the Indiana Pacers, Ryan Anderson (2011-12) with the Orlando Magic and Kevin Love (2010-11) with the Minnesota Timberwolves.