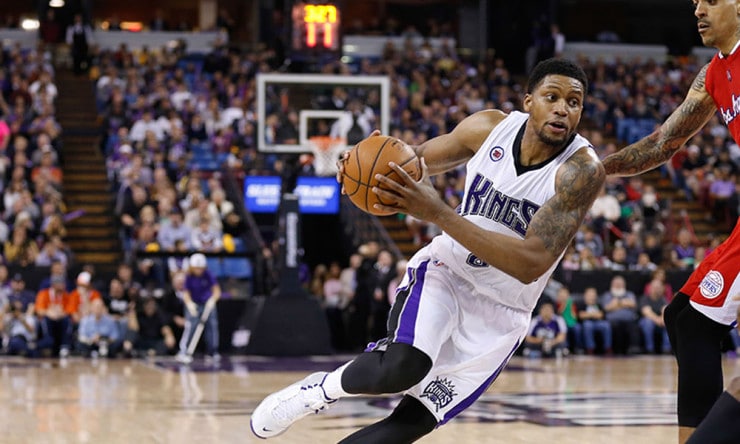 With every agonizing tick of the clock, Shaka Smart—the Virginia Commonwealth University head coach—saw his team’s bid at a conference championship looking all the more improbable.

The directive to double-team senior guard Langston Galloway and force the ball out of his hands made all the sense in the world, especially since Galloway had hit the go-ahead three-pointer for his Saint Joseph’s Hawks on the prior possession.

When the double-team came five feet behind the three-point line, Galloway drove right and then left, desperately trying to evade Juvonte Reddic and Jordan Burgess, but to no avail.

Out of the corner of his eye, Galloway saw the surprisingly dependable freshman on the wing, and when Galloway whipped a line-drive pass to DeAndre Bembry, without hesitation, the freshman executed a picture-perfect pass into the interior to Ronald Roberts, Jr.

Will The Kings Move Rudy Gay?

For the better part of a week, Sacramento Kings forward Rudy Gay has been the topic of trade discussions and rumors around the NBA – with Gay being linked to more than half a dozen teams in some scenario or another.

While the Kings are very much open to making a change, there is a big caveat for Sacramento to actually make a deal: it has to return something of real value.

The Kings are, like a number of teams, sitting just on the bubble of the playoff picture. They are willing to move a significant player if the return in the deal ensures they can move up in the standings and seriously compete for a playoff berth.

It isn’t often that a college kid as talented as former Michigan star Glenn Robinson III slips all the way to the second round of the draft, as he did back in 2014. Following his freshman season as a Wolverine, Robinson considered putting his name up for draft consideration – and mock drafts at the time suggested that probably would have been a good idea.

Teammate Trey Burke, the star of that year’s Michigan team who helped lead the squad to an NCAA championship appearance, rode that wave of momentum to the NBA lottery in 2013, but Robinson and teammate Mitch McGary, both projected first-round picks, held a joint press conference to announce that they would stay put for one more go at a title. A year later, they were bounced out in the Elite 8, and Robinson finally turned pro.

Orlando Hoping to Rebound in February

After securing the fourth-best record in the Eastern Conference through the end of December, the Orlando Magic tied the Phoenix Suns and Minnesota Timberwolves for fewest wins during the month of January.

Including last night’s 119-114 win over the Boston Celtics, the Magic posted just two victories in 14 tries last month. The team’s other win came against one of the worst teams in the league in the Brooklyn Nets on Jan. 8.

A 100-93 win over the Nets on Dec. 30 brought the Magic to fourth place in the East, but the team has been in a free fall ever since.

Inside the Chicago Bulls’ Damaging Inconsistency

Even to an outside observer unaware of their recent struggles, the tension surrounding the Chicago Bulls would be palpable after just a few minutes around the team. The air is thick, from players to staff to traveling media. Interactions feel forced and everyone near the team is well aware of the myriad issues facing this group behind the scenes.

Coach Fred Hoiberg begins his media availability before a back-to-back against the Utah Jazz in Salt Lake City and is immediately besieged by a wall of negativity. The Bulls were taken to school by the Los Angeles Clippers the previous day and a brief respite from the stress after a routine win over the Lakers a couple days prior has evaporated entirely. ‘What’s wrong with this team?’ Hoiberg is asked. ‘What’s causing such a talented roster to underachieve in a year when many pegged them as the most legitimate challengers to Cleveland in the East?’ Focus, effort and consistency are buzzwords of the day, clearly themes Hoiberg is familiar with hearing at this point. It takes effort to remind oneself that this team is six games over .500, a win or two away from the conference’s third seed.

The 2015-16 campaign has been one to forget for Phoenix Suns fans. The franchise lost their best player Eric Bledsoe for the season to a knee injury, has been besieged by a plethora of injuries up and down the roster and recently fired Jeff Hornacek as head coach. And the losses continue to mount.

Those are just some of the things that transpired during this ill-fated season.

The Suns’ problems stem back to last summer when the club traded forward Marcus Morris to the Detroit Pistons for a 2020 second-round pick. The traded Morris has thrived in Detroit, starting every contest and ranking in the league’s top 10 in average minutes per game.

The Bucks May Make Big Changes

Last season, the Milwaukee Bucks were one of the league’s biggest surprises. After winning an NBA-worst 15 games during the 2013-14 season, they managed to go 41-41 last year and capture the Eastern Conference’s sixth seed. And not only did this promising young team sneak into the playoffs, they gave the third-seeded Chicago Bulls a hell of a fight before losing the first-round series in six games.

Entering this year, expectations were extremely high in Milwaukee due to Jabari Parker coming back from injury, Greg Monroe joining the team as a free agent, Khris Middleton re-signing and the team’s cornerstones furthering their development. The young core now had some postseason experience, a ton of confidence and a style of play that proved to be effective. They finished the 2014-15 campaign with the NBA’s second-best defense, allowing 99.3 points per 100 possessions. The Bucks hoped that their stingy defense coupled with an improved offense (thanks, in large part, to the production of Parker and Monroe) would take the team to new heights in a wide open East.

We have just passed the halfway point of the 2015-16 NBA season, which means it’s probably too early to start discussing the free agent class of 2016, let alone free agency in 2017, right?

Typically, yes. But 2017 will be anything but a typical free agent crop. In fact, the summer of 2017 will feature arguably the greatest collection of free agent point guards to ever hit the open market at the same time in the history of the National Basketball Association.

Toronto Raptors teammates DeMar DeRozan and Kyle Lowry were recently named the co-Eastern Conference Players of the Month for January. Over 14 games played in January, DeRozan averaged 23.9 points, 4.2 rebounds, 3.8 assists and one steal, while shooting 44.2 percent from the field and 41.7 percent from beyond the arc. He also recorded eight straight games with 20 or more points, scored 30 points or more three games in a row and had a season-high 35 points against the Washington Wizards on January 8.

With an impressive January and what has so far been his best individual season, DeRozan was selected to be an Eastern Conference All-Star for just the second time in his seven-year career. Making the All-Star team in the East speaks volumes about how well DeRozan is playing when you consider that players like Kemba Walker, Reggie Jackson and Khris Middleton, all of whom are having great seasons, didn’t make the cut.