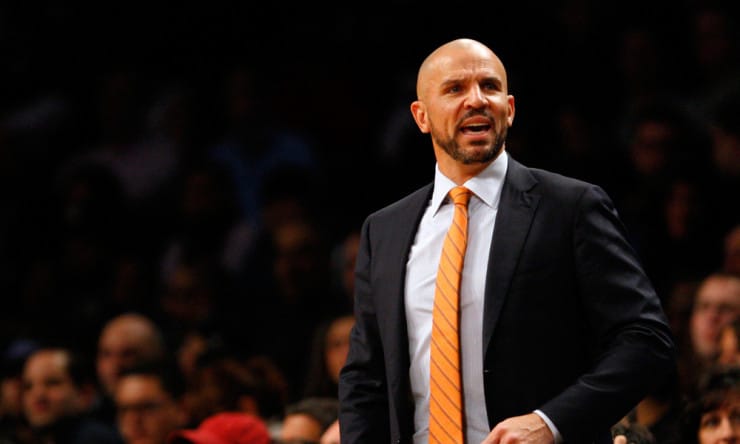 Jason Not Kidding Around

From the beginning, there were doubts.

On the court, he was always more of a lead-by-example type who galvanized his teammates not with his riveting words or spirited diatribes, but by his deeds.

And the challenge that Jason Kidd immediately faced when the Brooklyn Nets tapped him to become the 22nd coach in franchise history was not only how to motivate his team, but how to motivate a team chock full of veteran players whose only goal was to win a championship.

Over the course of his single season as the coach in Brooklyn, Kidd had his ups and downs and learned quite a bit.

Now, he has taken those lessons to Milwaukee.

Things are about to get interesting in the NBA with the February 19 trade deadline rapidly approaching. Trade chatter is most definitely in the air. Some teams have made noises already, and you can be sure many team executives will be talking during the upcoming All-Star Weekend events in New York. By now, teams have identified strengths and weaknesses of their roster with a careful eye pointed toward the postseason. This is the time of the season to address those flaws that could be exposed in the playoffs.

Basketball Insiders began a new series this week that focuses on each division and what those teams may do by the trade deadline. Today we look at the Southwest Division, which currently has four teams poised to enter the playoff race, with the other one not too far behind. We’ll explore if these teams are more likely to stand pat or more likely to pull the trigger on any deals. Listed under each team are players on expiring deals, potential expiring deals and players who could be shopped.

Every year there is an outcry from fans of a specific team jockeying for that final playoff spot. Rather than qualifying for the playoffs, they feel their team should simply toss in the towel, preserve their shot at a lottery pick and forego what’s usually a thorough beat down at the hands of the top seed in the postseason.

Watching your team get hammered into oblivion isn’t fun, but there is value in getting in the dance versus sitting out.

First, there is a monetary inducement. A playoff game, even in the first round, is said to generate anywhere from $1-2 million per home game, depending on the market. The current playoff format ensures every team gets two home games, so the revenue alone is meaningful. Equally, making the playoffs helps sell next season. Teams that make the playoffs tend to convert those playoff sales into season ticket sales or partial season sales.

Is The NBA’s All-Star System Broken?

It seems like every time an unworthy starter like Los Angeles Lakers guard Kobe Bryant gets voted into the All-Star game, or a worthy potential reserve like Sacramento Kings center DeMarcus Cousins gets snubbed, the entire peripheral NBA world, from fans to media, makes a collective nondescript yawp like all the angry Will Ferrell characters screaming at once. People are outraged, they bash the system, wonder when the NBA will ever get it right and demand that something be done immediately.

But what exactly is supposed to be done?

How many centers in the league are capable of giving you 35 points, 12 rebounds, three blocks and three steals in a single game?

Very few, even if you want to include Miami HEAT breakout center Hassan Whiteside, who seems liable to do something like that on any given night all of a sudden.

And, those who can don’t come cheap in terms of annual salary or assets required to acquire them in a trade, in the rare case that they are actually available at all.

That’s why the Brooklyn Nets are taking their time in dealing Brook Lopez, who put up that exact stat line in their most recent win against the Toronto Raptors. Lopez is averaging 15.3 points, 6.2 rebounds and 1.7 blocks on the season – a far cry from the monster numbers that he put up against the Raptors, but still good enough to make him one of the more productive centers in the league.

Has the Schedule Hardened the Mavericks?

Players often talk about how an 82-game NBA season can be long and grueling. Oftentimes, the schedule can be toughest on teams during long road trips.

Teams on the East and West Coasts might have it hardest because of the extended road trips to the opposite side of the country that can often last six or seven games and run through several cities. The Orlando Magic endured a six-game road trip that stretched from the end of November to the beginning of December, which included stops at Indiana, Phoenix, Golden State, Los Angeles, Utah and Sacramento. The team was able to split that trip by winning three of those games, but some teams aren’t as fortunate.

The Dallas Mavericks are a prime example of a team hitting a rough patch in the schedule.

Sustaining Quick Success is the Next Step for Whiteside

It has taken Hassan Whiteside one month to prove what he has been trying to show for the past four seasons:That he belongs in the NBA.

By now, his journey has become the feel-good story of the season. A lottery hopeful leaving school after one year and falling to the 33rd pick in 2010; a young player bouncing around from the Sacramento Kings to the D-League his first two seasons; a hungry big man exiting the NBA to play in China and Lebanon, where car bombings still linger on his mind years later. The miles traveled, the disappointments encountered, the emotions exhausted all culminated in a breakout month of January with the Miami HEA

The Portland Trail Blazers (32-16) are currently fourth in the West and possess an eight game lead over the Oklahoma City Thunder in the Northwest Division. One of the unheralded drivers of the team’s early success has been the play of shooting guard Wesley Matthews.

Matthews is averaging 16.4 points, 3.5 rebounds and 2.4 assists per game on the season. But more importantly for Portland Matthews’ play on the defensive end has helped limit opposing shooting guards to 42 percent shooting from the floor and just 32 percent from beyond the arc.

Where Will Brook Lopez End Up?

In 2010, Mikhail Prokhorov bought a majority stake in the then-New Jersey Nets and boldly proclaimed that he would turn the franchise around after the team failed to make the postseason three years in a row.

“How fast can we build a championship team?” Prokhorov asked rhetorically. “If everything goes as planned, I expect us to be in the playoffs next season and [win a] championship in one year minimum, and maximum in five years.”

Almost five years later and the Nets have made it to the posteason twice, making it as far as the semifinals last season. To accomplish this, Nets general manager Billy King traded away several draft picks to acquire veterans like Deron Williams, Kevin Garnett, Paul Pierce and Gerald Wallace in the hopes of quickly putting together a championship team. The gamble didn’t pay off and in the process the Nets loaded up their salary sheet and traded away valuable draft picks, some of which eventually became players like Damian Lillard, Gorgui Dieng, and Draymond Green.

The NBA’s trade deadline is nearly two weeks away, so expect to hear plenty of rumors between now and Feb. 19 (especially after All-Star Weekend, where a lot of discussions happen since everyone around the league is in one place).

One team that has been mentioned quite a bit recently is the Denver Nuggets, and their general manager Tim Connelly even told the Denver Post that he is being “very, very aggressive right now” on the trade front.

Rival executives say that the Nuggets would love to add a star player between now and the deadline. They were linked to Brook Lopez of the Brooklyn Nets recently and they’d be open to packaging some of their assets together if it allowed them to land a star-caliber player. Denver has been searching for a blockbuster move like this for quite some time, even attempting to trade for Kevin Love last offseason before he was dealt from the Minnesota Timberwolves to the Cleveland Cavaliers. The Nuggets haven’t had a star since they traded Carmelo Anthony to the New York Knicks in 2011.

He felt like he was living his worst nightmare. The images and fears that haunted him throughout his upbringing were now surrounding Nate Jawai.

He had always hated needles, avoided looking at blood and was terrified of the emergency room and sound of ambulance sirens. His mother Lyn was a nurse midwife, but he hated everything about hospitals.

However, two weeks after his 27th birthday last year, Jawai had to confront his fears when he endured severe trauma to his neck and back following a blow to the head. When he started having numbness in his arms, vertigo and horrible headaches, he had to seek treatment and suddenly felt like he was in an episode of E.R. (a television series he vowed to never watch).

The NBA trade deadline is nearing.  Teams have until 3:00 p.m. EST on February 19 to submit their deals to the league.

The trade market has been hot for most of the season, with a number of players already changing places including Rajon Rondo, Jeff Green, Timofey Mozgov, Brandan Wright, J.R. Smith, Dion Waiters and Corey Brewer.

The following is a list of each NBA franchise, their roster count, cap position and some interesting trade pieces that could move over the next couple of weeks:

Which Current Players Do The Lakers Build Around?

When you’re dealing with a Los Angeles Lakers team that is currently 13-37 and actively sinking in the standings, the gut reaction of some might be to get rid of anyone or anything associated with the group that is likely in the midst of setting yet another franchise mark of futility. However, there are several pieces on this Lakers roster that could be productive parts of the future.

Obviously, the team is counting on Julius Randle to be a future franchise cornerstone when he returns next season, but along with what they hope ends up being a top pick in the upcoming draft, the front office and coaching staff have to utilize the remaining 33 games in order to assess what exactly they have with other young assets. While several media entities have attempted to drum up reasons as to why it makes sense to trade Kobe Bryant to the New York Knicks for what would realistically be his final season, it seems likely that Bryant will retire a Laker. Beyond that, and while we all wish him a full recovery, Bryant won’t be a part of today’s discussion.